THE NOW WORD ON MASS READINGS
for December 7th, 2013
Memorial of St. Ambrose 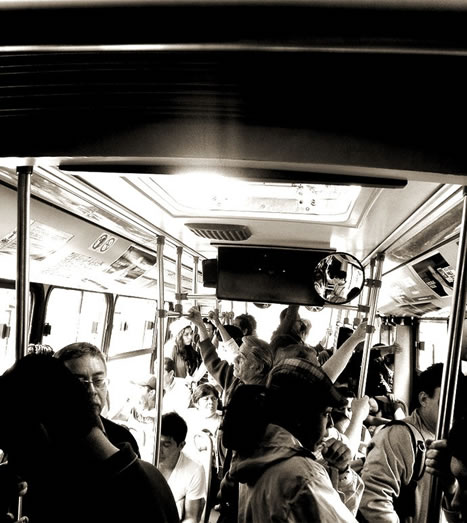 All the Lonely People, by Emmanuel Borja

IF there were ever a time when, as we read in the Gospel, people are “troubled and abandoned, like sheep without a shepherd,” it is our time, on so many levels. There are many leaders today, but so few role models; many who govern, but so few who serve. Even in the Church, the sheep have wandered for decades since the confusion after Vatican II left a moral and leadership vacuum on the local level. And then there have been what Pope Francis calls “epochal” changes [1]cf. Evangelii Gaudium, n. 52 that have led to, among other things, a profound sense of loneliness. In the words of Benedict XVI:

Indeed, studies show that, despite the spread of social media like Facebook, which now has over 1.1 billion participants, regular users feel more lonely and less happy after periods of use. [2]cf. study by University of Michigan Institute for Social Research, Ethan Kross, “Facebook Use Predicts Declines in Subjective Well-Being in Young Adults”, August 14th, 2013; www.plosone.org As one writer in the New York Times put it,

Technology celebrates connectedness, but encourages retreat… Each step “forward” has made it easier, just a little, to avoid the emotional work of being present, to convey information rather than humanity. —Jonathan Safran Foer, www.nytimes.com, June 8th, 2013

And so, we feel more disconnected than ever.

As I reflect on this week’s readings in the wake of Pope Francis’ Apostolic Exhortation, Evangelii Gaudium (“The Joy of the Gospel”), I hear today’s Gospel with more force and immediacy than ever:

The harvest is abundant but the laborers are few; so ask the master of the harvest to send out laborers for his harvest.

But you’ll notice that after Jesus told the Apostles to pray for labourers, He immediately turned to them and said, “Go to the lost sheep of the house of Israel.” Is it possible that when we think of the word “evangelization” we always think it’s for someone else… for Mark Mallett, for Fr. So and So, Sister Such and Such? Do you realize the call is very much for you too? The Psalm today says,

He heals the brokenhearted and binds up their wounds.

But how does He do that except through His Church… you and me?

…all of us are called to take part in this new missionary “going forth”… all of us are asked to obey his call to go forth from our own comfort zone in order to reach all the “peripheries” in need of the light of the Gospel. —POPE FRANCIS, Evangelii Gaudium, n. 20

This is why I am encouraging you, my dear family of readers, to persevere in the tremendous sufferings that are being experienced by so many today striving to be faithful. Because, as I wrote earlier this week, Jesus is writing Your Testimony, but He does so in order to send you to the lost sheep that they may hear the Good News through you.

The world is lonely today and profoundly lost. In the search for happiness, like the prodigal son, we have cast off every restraint (see Removing the Restrainer). But this is only compounding the isolation and fear that is gripping many hearts. This is why Our Lady called us to To the Bastion several years ago. I really encourage you to go back and re-read that prophetic word (and the ones in Related Reading below) for I believe, with Francis’ Exhortation, we are now being sent on a profound mission, a mission of mercy very much related to our “epochal” times:

But let us begin where we can, and do only what the Lord asks: to some He gives ten talents, another five, and to many, only one. But He expects the same generous response from each of us, “according to the measure of Christ’s gift.” [3]cf. Eph 4:7 And for all of us, that starts in the home by witnessing loving-service to our spouse, patience with our children, kindness to our neighbour. Jesus did not immediately send the twelve Apostles to the distant nations. He started with the local villages, their own house—the “house of Israel.”

You, my brother have the Holy Spirit; you, my sister, are a living tabernacle. For both of you have been baptized; both of you have received His Body and Blood, what Isaiah calls today, “the bread you need and the water for which you thirst.” Now go, and give what you can to those who are hungry, to those who thirst—Christ in you—beginning with those in your own home.

Going out to others in order to reach the fringes of humanity does not mean rushing out aimlessly into the world. Often it is better simply to slow down, to put aside our eagerness in order to see and listen to others, to stop rushing from one thing to another and to remain with someone who has faltered along the way. At times we have to be like the father of the prodigal son, who always keeps his door open so that when the son returns, he can readily pass through it. —POPE FRANCIS, Evangelii Gaudium, n. 46

50% off of everything on Mark’s music, book, and more
until December 13th!
See details here