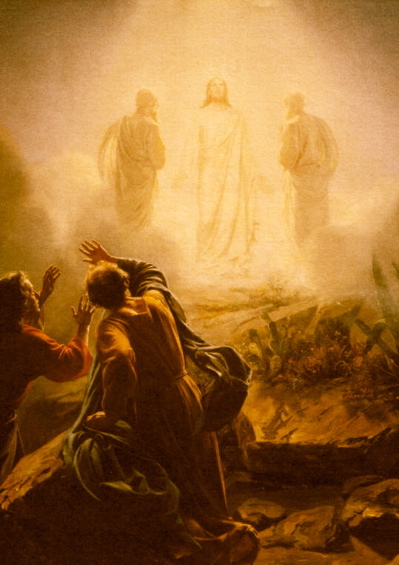 WHAT is this great grace that God will give to the Church in The Coming Pentecost? It is the grace of the Transfiguration.

THE MOMENT OF TRUTH

But if God gives His secrets to His prophets, it is for them, at the appointed time, to announce them. So too, Christ has been revealing in these days His plans, just as He did prior to His Transfiguration.

The Son of man must suffer many things, and be rejected by the elders and chief priests and scribes, and be killed, and on the third day be raised… If any man would come after me, let him deny himself and take up his cross daily and follow me. For whoever would save his life will lose it; and whoever loses his life for my sake, he will save it... Now about eight days after these sayings he took with him Peter and John and James, and went up on the mountain to pray. (9:22-24, 28)

I have written extensively here about the many signs of a present and coming persecution of the Church. But before that, I believe the Church will experience, for a brief moment, an interior transfiguration of the soul, an “illumination of conscience.“

As he was praying, the appearance of his countenance was altered, and his raiment became dazzling white. (29)

Those who have heeded the call to “prepare” in these days will, I believe, see their soul in an anticipated union with God (as well as those things which are present obstacles to that union. This will occur for everyone on earth at that time.) At the same time, we will also be given the prophetic understanding of what is to come, and the strength to persevere in it—symbolized by the prophet Elijah, and Moses, the fearless leader of the Israelites:

And behold, two men talked with him, Moses and Elijah, who appeared in glory and spoke of his departure, which he was to accomplish at Jerusalem. (30-31)

For those in the Church who have been less prepared, and those in the world who have fallen into a heavy sleep of sin, the light of this illumination will be both painful and confusing.

Now Peter and those who were with him were heavy with sleep, and when they wakened they saw his glory and the two men who stood with him… Peter said to Jesus, “Master, it is well that we are here; let us make three booths, one for you and one for Moses and one for Elijah” — not knowing what he said. (32-33)

THE MOMENT OF DECISION

The illumination of souls will be for a small number in the Church like a “new” Pentecost, releasing new charisms, holy boldness, and Apostolic zeal, while infusing at the same time a general understanding of the coming Passion.  For others, it will be a moment of decision: to either accept the sovereignty of Christ, and the authority of His Church built upon Peter, the Rock—or to deny it. In essence, to choose whether or not to listen to the Father speaking through the Holy Spirit. It will be a time of evangelization when the Church will make a “last call” to this present age to heed the Good News.

What a moment this will be! The world will be turned upside down, and everything hidden in its pockets will fall to the ground. How much sin and rebellion will then be picked up and put back into the soul is dependent, in part, on free will… and contingent upon the intercessory prayer of the Church during this present time of grace.

It also seems to me that this Transfiguration has already begun in many souls—a slow awakening—and will culminate in this single event. I like to think of the Triumphal entry of Christ into Jerusalem as the peak of this Illumination of Conscience when there is a joyful recognition by the many that Jesus is the Messiah. At the same time, of course, there were also those who began to plot His death…

The internal experiences of several 20th century mystics describe the pneumatic coming as a new presence of the Holy Spirit in the human spirit revealed exponentially at the threshold of the third millennium. —Fr. Joseph Iannuzzi, The Splendor of Creation, p. 80

The young have shown themselves to be for Rome and for the Church a special gift of the Spirit of God… I did not hesitate to ask them to make a radical choice of faith and life and present them with a stupendous task: to become “morning watchmen” at the dawn of the new millennium. —POPE JOHN PAUL II, Novo Millenio Inuente, n.9; (cf. Is 21:11-12)

Have you stopped receiving these emails? It is possible that your mail server has pegged these letters as “junk mail.” Write to your internet service provider and ask them to allow emails from markmallett.com