SINGING and playing guitar since the age of nine, Mark Mallett is a Canadian singer/songwriter & Catholic evangelist. Since leaving his career as a successful television journalist in 2000, Mark has been touring extensively throughout North America and abroad giving parish missions & concerts, and speaking and ministering at retreats, conferences and Catholic schools. He had the privilege of singing at the Vatican and presenting his music to Pope Benedict XVI. Mark has appeared on EWTN’s "Life on the Rock" as well as on a number of other television and radio broadcasts. 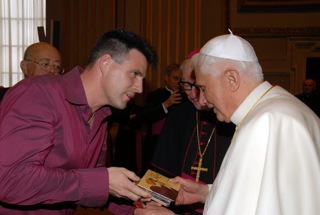 While singing a song he had written for the Liturgy of the Mass ("Holy, Holy, Holy"), Mark felt drawn to go to the church and pray before the Blessed Sacrament. It was there that he heard the Lord calling him to become a "watchman" for this generation, as Pope John Paul II asked the youth at World Youth Day in Toronto, Canada.

With that, and under the care of his spiritual director, Mark began to publish meditations on the internet to prepare the Church for the dramatic times we live in. They are now read by thousands throughout the world (Spiritual Food For Thought). Mark also recently published a summary of those writings in the Fall of 2009 in a book called The Final Confrontation.

Mark and his wife Lea have eight beautiful children together and make their home in Western Canada.

We need your help!

Thank you for your support of this full-time apostolate.

(Receive 50% off in Mark's online store)