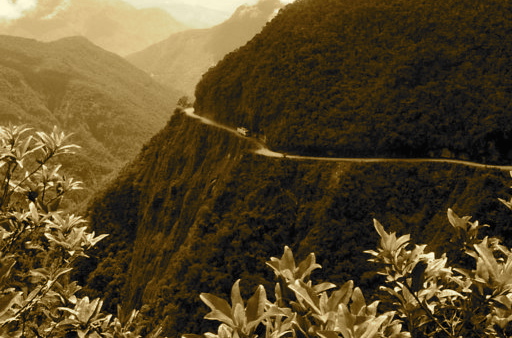 PERHAPS you are overwhelmed by the plethora of spiritual paths you’ve heard and read about. Is growing in holiness really that complicated?

Unless you turn and become like children, you will not enter the kingdom of heaven. (Matt18:3)

If Jesus commands us to be like children, then the path to Heaven must be reachable by a child.  It must be attainable in the simplest of ways.

THE MOUNTAIN OF FAITH

The Desert Path is really one that begins to wind up a mountain, the Mountain of Faith.

What do you notice about mountain roads as they go higher and higher? There are guardrails. These guardrails are God’s commandments. What are they there for but to protect you from falling over the edge as you ascend the mountain! There is also the opposite edge of the path, or perhaps it is a dotted line in the middle. This is the duty of the moment. The soul, then, is guided up the Mountain of Faith between God’s commandments and the duty of the moment, both of them constituting His will for you, which is the path to freedom and life in God.

The lie of Satan is that these guardrails are there to restrict your freedom. They are there to keep you from flying like gods over the valley below! Indeed, many people today refuse to obey the commandments of God, refuting them as old-fashioned, out-dated, out-moded. They steer their lives straight toward the guardrails, bursting through the protective barrier. For a moment, they appear to be free, flying high above their conscience! But then, the law of gravity kicks in—that spiritual law which says "you reap what you sow"… the "wages of sin is death"… and suddenly, the gravity of one’s mortal sin pulls the soul helplessly toward the abyss of the valley below, and all the destruction the fall brings.

Mortal sin is a radical possibility of human freedom, as is love itself. It results in the loss of charity and the privation of sanctifying grace, that is, of the state of grace. If it is not redeemed by repentance and God’s forgiveness, it causes exclusion from Christ’s kingdom and the eternal death of hell, for our freedom has the power to make choices for ever, with no turning back. —Catechism of the Catholic Church (CCC), n. 1861

Thanks be to Christ, there is always a way back onto the Mountain. It is called Confession. Confession is the Great Gateway back into God’s grace, back onto the path of holiness which leads to eternal life, even for the most depraved sinner.

Venial sin, however, is like "bumping" one’s life into the guardrail. It is not enough to break through and fall from Grace because this is not the soul’s desire. However, out of human weakness and rebellion, the soul still flirts with the illusion of "flying," and therefore begins to be worn down each time it rubs against God’s commandments. This does not stop the journey toward the Summit, but impedes it. And if one takes his venial sins lightly, he may end up eventually breaking through the barrier…

While he is in the flesh, man cannot help but have at least some light sins. But do not despise these sins which we call "light": if you take them for light when you weigh them, tremble when you count them. A number of light objects makes a great mass; a number of drops fills a river; a number of grains makes a heap. What then is our hope? Above all, Confession. —CCC, n1863 (St. Augustine; 1458)

Confession and the Holy Eucharist, then, become like divine Oases on our journey to the Summit which is Union with God. They are places of refuge and refreshment, healing and forgiveness—the Endless Spring of beginning again. When we lean over their merciful waters, looking back at us is not our own sinful reflection, but the face of Christ saying, "I have walked this Mountain, and I will ascend it with you, My little lamb."

LET NOTHING TROUBLE YOU

The truth is, most of us are venial sinners. Few of us complete the day without having committed some fault, some transgression. This reality can lead us to discouragement such that we can even give up. Or we believe the lie that since we struggle constantly with a particular sin, it’s part of who we are, and therefore excusable or unbeatable… and thus, we begin to backslide. But this is why it is called the "Mountain of Faith"! Where sin abounds, grace abounds all the more. Do not let Satan define you, accuse you, or put you down, child of God. Pick up the Sword of the Word, raise the shield of Faith, resolve to avoid sin and the near occasion of it, and begin to walk up this road again, one step at a time, trusting completely in the free gift of God’s mercy.

For this is the truth which you must hold up in the face of the enemy’s lies:

Venial sin does not break the covenant with God. With God’s grace it is humanly reparable. Venial sin does not deprive the sinner of sanctifying grace, friendship with God, charity, and consequently eternal happiness. —CCC, n1863

If we confess our sins, he is faithful and just, and will forgive our sins and cleanse us from all unrighteousness.  (1 Jn 1:9)

Thank you Jesus! Despite my faults and even venial sins, I am still on the Mountain, still in your grace on this simple little path of keeping your commandments. How much more then do I wish to be rid of these "little" sins that I may speedily ascend higher and higher toward the Summit of your generous Sacred Heart, where I will burst into living flames of Love for all eternity!