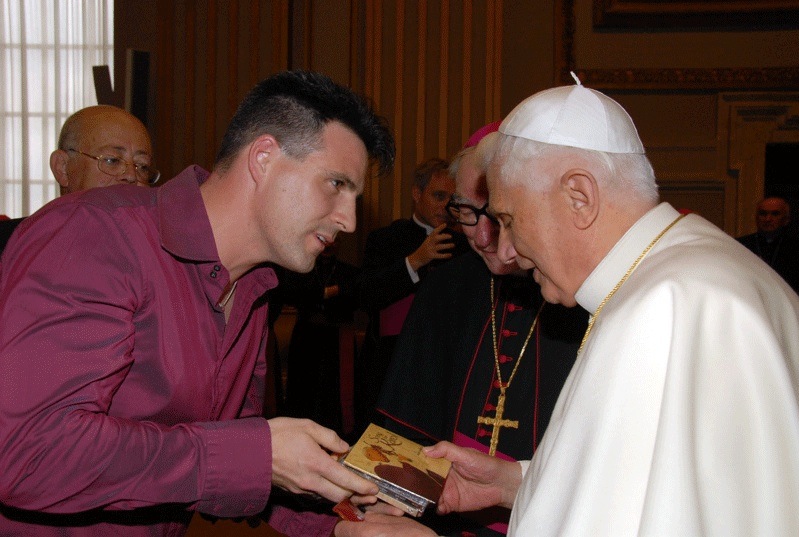 MARK MALLETT is a Roman Catholic singer/songwriter and missionary. He has performed and preached throughout North America and abroad.

The messages posted on this website are the fruit of prayer and ministry. Any posting which contains elements of “private revelation” have been subjected to the discernment of Mark’s spiritual director.

Visit Mark’s 0fficial website and explore his music and ministry at:
www.markmallett.com

A letter of commendation from Mark's Bishop, Most Reverend Mark Hagemoen of the Saskatoon, SK Diocese:

The following is an excerpt from Mark’s book, The Final Confrontation... and explains the impetus behind this blog.

MY days as a television reporter eventually came to an end and my days as a full time Catholic evangelist and singer/songwriter began. It was in this phase of my ministry that suddenly a new mission was given to me... one that forms the impetus and context of this book. For you’ll see that I have added some of my own thoughts and “words” which I have received through prayer and discerned in spiritual direction. They are, perhaps, like little lights pointing to the Light of Divine Revelation. The following is a story to explain this new mission further...

In August of 2006, I was sitting at the piano singing a version of the  Mass part “Sanctus,” which I had written: “Holy, Holy, Holy...” Suddenly, I felt a powerful urge to go and pray before the Blessed Sacrament.

At the church, I began to pray the Office (the official prayers of the Church outside of the Mass.) I noticed immediately that the “Hymn” was the same words I’d just been singing: “Holy, holy, holy! Lord God Almighty...” My spirit began to quicken. I continued, praying the words of the Psalmist, “Burnt offering I bring to your house; to you I will pay my vows...” Within my heart welled up a great longing to give myself completely to God, in a new way, on a deeper level. I was experiencing the prayer of the Holy Spirit who “intercedes with inexpressible groanings” (Rom 8:26).

As I spoke with the Lord, time seemed to dissolve. I made personal vows to Him, all the while feeling within me a growing zeal for souls. And so I asked, if it be His will, for a greater platform from which to share the Good News. I had the entire world in mind! (As an evangelist, why would I want to cast my net only a short distance from shore? I wished to drag it across the whole sea!) Suddenly it was as though God was answering back through the prayers of the Office. The First Reading was from the book of Isaiah and was titled, “The call of the prophet Isaiah”.

I continued to read how the Seraphim then flew to Isaiah, touching his lips with an ember, sanctifying his mouth for the mission ahead. “Whom shall I send? Who will go for us?” Isaiah responded, “Here I am, send me!” Again, it was as though my earlier spontaneous conversation was unfolding in print. The reading went on to say that Isaiah will be sent to a people who listen but do not understand, who look but see nothing. The Scripture seemed to imply that the people will be healed once they do listen and look. But when, or “how long?” asks Isaiah. And the Lord answered, “Until the cities are desolate, without inhabitants, houses, without a man, and the earth is a desolate waste.” That is, when mankind has been humbled, and brought to its knees.

The second reading was from St. John Chrysostom, words which seemed as though they were being spoken directly to me:

You are the salt of the earth. It is not for your own sake, he says, but for the world's sake that the word is entrusted to you. I am not sending you into two cities only or ten or twenty, not to a single nation, as I sent the prophets of old, but across land and sea, to the whole world. And that world is in a miserable state... he requires of these men those virtues which are especially useful and even necessary if they are to bear the burdens of many... they are to be teachers not simply for Palestines but for the whole world. Do not be surprised, then, he says, that I address you apart from the others and involve you in such a dangerous enterprise... the greater the undertakings put into your hands, the more zealous you must be. When they curse you and persecute you and accuse you over every evil, they may be afraid to come forward. Therefore he says: “Unless you are prepared for that sort of thing, it is in vain that I have chosen you. Curses shall necessarily be your lot but they shall not harm you and simply be a testimony to your constancy. If through fear, however, you fail to show the forcefulness your mission demands, your lot will be much worse.” —St. John Chrysostom, Liturgy of the Hours, Vol. IV, p. 120-122

The last sentence really struck me, for just the night before, I was worrying about my fear of preaching since I have no clerical collar, no theological degree, and [eight] children to provide for. But this fear was answered in the following Responsory: “You will receive power when the Holy Spirit comes upon you—and you will be my witnesses to the ends of the earth.”
At this point, I was overwhelmed with what the Lord seemed to be saying to me: that I was being called upon to exercise the ordinary prophetic charism. On the one hand, I thought it to be rather presumptuous to think such a thing. On the other, I could not explain the supernatural graces which were welling up within me.
My head spinning and my heart aflame, I went home and opened my Bible and read:

I will stand at my guard post, and station myself upon the rampart, and keep watch to see what he will say to me, and what answer he will give to my complaint. (Habb 2:1)

This in fact is what Pope John Paul II asked of us youth when we gathered with him at World Youth Day in Toronto, Canada, in 2002:

In the heart of the night we can feel frightened and insecure, and we impatiently await the coming of the light of dawn. Dear young people, it is up to you to be the watchmen of the morning (cf. Is 21:11-12) who announce the coming of the sun who is the Risen Christ! —Message of the Holy Father to the Youth of the World, XVII World Youth Day, n. 3

This call to “watch” was repeated by Pope Benedict in Australia when he asked the youth to be messengers of a new era:

Empowered by the Spirit, and drawing upon faith's rich vision, a new generation of Christians is being called to help build a world in which God's gift of life is welcomed, respected and cherished—not rejected, feared as a threat, and destroyed. A new age in which love is not greedy or self-seeking, but pure, faithful and genuinely free, open to others, respectful of their dignity, seeking their good, radiating joy and beauty. A new age in which hope liberates us from the shallowness, apathy, and self-absorption which deaden our souls and poison our relationships. Dear young friends, the Lord is asking you to be prophets of this new age... —POPE BENEDICT XVI, Homily, World Youth Day, Sydney, Australia, July 20th, 2008

Finally, I felt the urge to open the Catechism—a 904 page volume—and, without knowing what I would find, I turned directly to this:

In their “one to one” encounters with God, the prophets draw light and strength for their mission. Their prayer is not flight from this unfaithful world, but rather attentiveness to The Word of God. At times their prayer is an argument or a complaint, but it is always an intercession that awaits and prepares for the intervention of the Savior of God, the Lord of history. —Catechism of the Catholic Church (CCC), 2584, under heading: “Elijah and the prophets and conversion of heart"

The reason I write the above is not to declare that I am a prophet. I am simply a musician, a father, and a follower of the Carpenter from Nazareth. Or as the spiritual director of these writings says, I am simply “God’s little courier.” With the strength of this experience before the Blessed Sacrament, and the assurances I received through spiritual direction, I began to write according to the words which were placed in my heart and based upon what I could see upon the “rampart.”

Our Blessed Lady’s command to St. Catherine Labouré perhaps summarizes best what my personal experience has been:

Prophets, true prophets, those who risk their neck for proclaiming “the truth”
even if uncomfortable, even if “it is not pleasant to listen to”...
“A true prophet is one who is able to cry for the people
and to say strong things when needed."
The Church needs prophets. These kinds of prophets.
“I will say more: She needs us all to be prophets."
—POPE FRANCIS, Homily, Santa Marta; April 17th, 2018; Vatican Insider