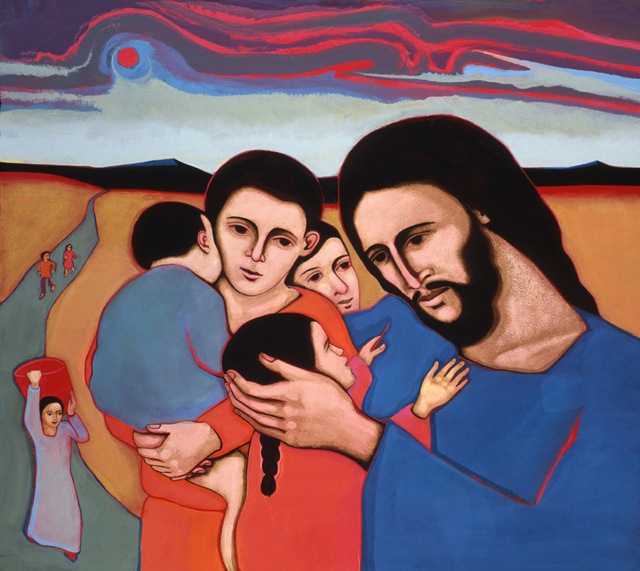 Jesus and the Children by Michael D. O’Brien

THERE has been a tremendous response to my letter written to you a couple weeks ago called It’s Time. I wrote how, over a year ago, I received an interior word from the Lord that He wanted me to produce a television show to speak the "now word" to His people. The sense was that this show would come at a time when major events are unfolding and other events would be imminent. Again, recently, I heard a clear word in my heart:

In that letter to you, we asked for financial help to pull this off, as it means leaving the road (which I have been on for eight years) and remaining home to produce this. The problem is that my concert tours have been the main source of income for my family of ten.

Well, we have once again received a wave of letters and online support from so many of you. I cannot tell you how deeply touched I am… I have stood there and held every one of your letters, read every word, prayed for your prayers requests, and received your generosity with the love with which it came. I know so many of you gave at a time of economic uncertainty… I think of those $8 donations or $10 or whatever it may have been. Every single penny is precious—precious to Our Lord, precious to me. Because with it, we are poised to broadcast a message of Hope to the world….

After some deliberation, we have finally chosen the title for the show: Embracing Hope. There is a long story to this… one that has to do with a larger vision given to me in the Year of the Jubilee, 2000. Suffice it to say, it is a response to our beloved Pope John Paul II’s book, Crossing the Threshold. For I believe the Church is beginning to enter the final stages in the birth canal… a period of transition in which a smaller, purified Body will be born in a new era when we will cross the threshold of this era and embrace Hope, a time of peace that Pope Leo XIII spoke of:

Because of your response, we have been able to purchase the necessary equipment to tape the show and to pay for other resources and software. My last need is a computer able to handle the heavy work of video editing etc. If one of my readers would like to sponsor buying this computer, please see the information at the bottom of this letter on how to donate. We are looking at $4500 US for this machine. Perhaps a better investment than stocks these days!

We are very close to our first show, I hope within the next couple weeks. We are fasting and praying and begging the Lord of the Harvest to bring many, many fruits, many, many souls from this endeavor. To my dear priest readers, I beg you to say a Mass for this new apostolate; to my other readers, would you consider saying a "dry mass"—that is, the Holy Rosary for the many souls whom I am certain Our Lady is hoping to gather in her motherly garments? To my evangelical and Protestant readers, I beg your powerful intercessory prayer that in the midst of these trying days, we may draw a bountiful harvest of children to Jesus.

Since the conclusion of the U.S. election, the collapse of the economy has taken on the speed of a landslide. The election of Barack Obama, while a tragic day for the unborn, is not a surprise. It is merely one more necessary gear in the Great Machine of a New World Order which is forming more quickly than many realize… an Order which will come and go like a wildflower as it’s false promises fade and the nectar of its false religion turns bitter.  It will be as brief as The Eclipse of the Son.

But even as I write, I can see Jesus smiling. He is holding each of us the way Michael O’Brien has beautifully depicted it in his painting above. I believe He is saying,

Do not be afraid, My little ones. Everything is in My hands. All things are ordered to the good for those who love Me. Do not be afraid, but rather, lift high your heads and prepare yourselves for the Mission about to unfold. I have prepared you myself, through the hands of my Blessed Mother, for this hour, this time. Go out into the darkness and bring into the light the lost souls whom my Sacred Heart burns for. Go without fear into the hearts of men in the authority which I have given you. Love, love, love, for love will conquer every mountain, every wall, and every principality and power arrayed against you. Love, love, love, for I am Love, and to love is to make Me present to the world. You are My beloved and I promise to never leave you!

The Woman in Revelation 12 is both Mary and the Church. Mary is a prototype of the Church. And when her mission to birth Jesus into the world began, the first words she heard from the Angel Gabriel were "Do not be afraid." So too now, Gabriel stands above the earth and proclaims, "Do Not Be Afraid!" For the Woman is about to give birth at the appointed time to the whole Body of Christ, both Jew and Gentile, in a unity long foreseen by the ancient prophets. Were these not the first words of John Paul II when he became Pope—the pope who said we are facing the "final confrontation", the battle between the Woman and the dragon?

How long until that day… I do not know, nor will I even guess. I doesn’t matter, because I only have today to love and serve the Lord. And I know for certain that my life here on earth is growing shorter by the hour.

Just know, my beloved friends, that when this show begins to air on the internet, it was accomplished because of your love, your prayers, your support, your words of encouragement, but above all, because of your zeal and passion for our Lord Jesus Christ. My love and affection for you grows stronger each day. It is imperative that you do not give up in these last hours! The spirit of antichrist is very strong in the world, that spirit which denies Christ and all things good and holy. Some of you have written in shock that many of your Catholic family and friends voted for a rabidly pro-abortion president in the United States. Let it be a sign and warning to you how close we are to that ultimate deception which will be revealed when the Lawless One appears, should his appearance in fact come in our time… These matters and their timing we quietly leave in the Lord’s hands as we busy ourselves with the matters of the Kingdom.

We are far behind in sending out thank you notes to those who were a
ble to give. Just know how deeply appreciative we are, and that we pray for all of our readers each day.

May Jesus be glorified now and forever!

TO make it easier for some of my readers, here are three ways you can donate to our apostolate:

I. By Credit Card or PayPal, click on this button:

or paste this address in your browser:

II. Mail a cheque to:

Thank you so much! Your prayers are needed now more than ever. God bless you.