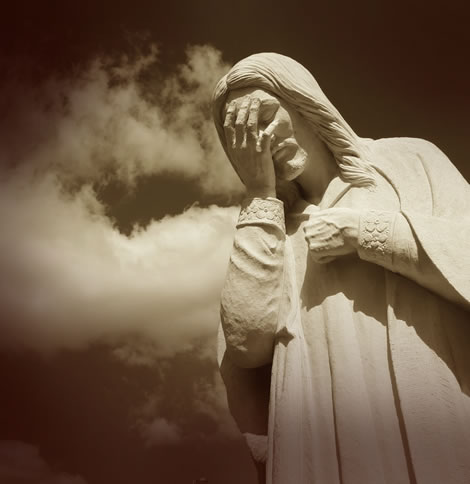 CAN you hear it? Jesus is leaning over humanity again, saying, “Ephphatha” that is, “Be opened”…

Jesus groans again over a world that has become “deaf and dumb,” a people that has so compromised that we have completely “lost the sense of sin.” So it was with Solomon whose idolatry would tear his kingdom apart—symbolized by the prophet tearing his cloak into twelve strips.

So too in our times, we see the same fruits of idolatry—division upon divisions: kingdom against kingdom, nation against nation, ethnic group against ethnic group, whites against blacks, Chinese against Japanese, the West against the Middle East, husbands against wives, children against parents… and perhaps the most alarming division of all is the separation of man from the image in which he was created:

You don’t have to be just male or female on Facebook anymore. The social media giant has added a customizable option with about 50 different terms people can use to identify their gender as well as three preferred pronoun choices: him, her or them. —Associated Press, Feb. 13th, 2014

Like the deaf man in today’s Gospel, we can no longer hear the voice of God; our speech, too, has become mumbo-jumbo. Listen to us today rationalizing the euthanization of children! [1]cf. “Belgium Parliament passes law allowing children to be euthanized”, Feb. 13th, 2014; LifeSiteNews.com Listen to us throw common sense into the garbage [2]cf. “U.N. Committee to Vatican: Change Church Teaching“, Feb. 8th, 2014, National Catholic Register and natural law into the heap [3]cf. “Same Sex Marriage Ban Unconstitutional”, Feb. 13th, 2014, Brietbart.com — and that’s just this week’s news!

We are the deaf and dumb man in today’s Gospel.

My people heard not my voice, and Israel obeyed me not; so I gave them up to the hardness of their hearts; they walked according to their own counsels. If only my people would hear me… (Today’s Psalm)

But did you notice—the man was “brought” to Jesus. He did not hear Jesus call him, nor does he appear to ask to be healed. And yet, because he is brought to Jesus, Our Lord lays compassionate hands upon him, and from the depths of His divine being sighs… and then touches his ears, his tongue, and breathes the words ephphatha.

You and I, dear brothers and sisters, are the ones who are to bring this “deaf and dumb” generation before Jesus. We do this through our prayers and fasting, by offering our little sufferings to Him throughout the day. To Him we bring those who have ears but cannot hear; eyes, but cannot see; mouths, but cannot reason. And we beg Him, “Jesus, lay your hands upon us once again.”

But He also turns to us and says, “You be my fingers to open the ears of the deaf; you be the spittle of My mouth to loose the tongues of deception; you be the light that shines the way for others to bring them out from the darkness. You be the one to invite others to…

This is a song I wrote in Ireland…
a song of the groaning of Our Lady, calling us home…

I need the support of my readers to maintain
this full-time ministry. Please pray about it…
…and pray for me too! Bless you.