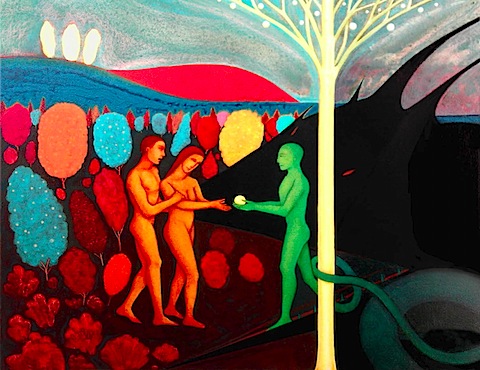 THOUGH not nearly as powerful as Goodness, but certainly pervasive, is the presence of evil in our world. But unlike generations past, it is no longer hidden. The dragon has begun to show his teeth in our times…

EVIL HAS A NAME

In a letter to the late Thomas Merton, Catherine de Hueck Doherty wrote:

For some reason I think you are weary. I know I am frightened and weary too. For the face of the Prince of Darkness is becoming clearer and clearer to me. It seems he does not care any more to remain “the great anonymous one,” the “incognito,” the “everyone.” He seems to have come into his own and shows himself in all his tragic reality. So few believe in his existence that he does not need to hide himself anymore! —Compassionate Fire, The Letters of Thomas Merton and Catherine de Hueck Doherty, March 17th, 1962, Ave Maria Press (2009), p. 60. Catherine Doherty formed the Madonna House Apostolate, which continues to feed the poor in soul and body from its base in Combermere, Ont., Canada

Oh, dear Baroness, if you were alive today! What would you say to us now? What words would pour forth from your mystical, prophetic heart?

Evil has a name. And his name is Satan.

Yes, some theologians have done a neat job of dismissing this fallen angel as pure myth, a mere literary technique to explain the dimensions of suffering and darkness in our world. Yes, Satan has been fortunate to have convinced even some members of the clergy to expel the truth of his existence, so much so, that to even suggest that there is a devil draws the snorts and mockery of some theologically “enlightened.”

But this should surprise no one. The best enemy is a hidden one. But only hidden for so long as it waits to spring forth at the opportune moment. And that moment, brothers and sisters, has finally come.

As I wrote in my book, The Final Confrontation, the battle between the Woman and the dragon of Revelation 12 began a pivotal phase in history in the 16th century. It was then that the dragon, Satan, the ancient serpent, began his end-game assault on the Woman-Church, not immediately through the violence of martyrdom, but through something more deadly: poisoned philosophy. The dragon remained hidden behind the intellects of men, suffusing them little by little with sophistries—lies and deceptions—that began to move society, and even thinkers within the Church, slowly away from their center: life in God. These deceptions, hidden under the form of “isms” (eg. deism, scientism, rationalism, etc.), continued throughout the following centuries, mutating and evolving, pushing the world further and further away from belief in God until they finally began to take on their most deadly forms of “communism,” “atheism,” and “materialism,” of “radical feminism,” “individualism,” and “environmentalism.” Still, the dragon has remained somewhat hidden behind these “isms”, despite their bloody fruits, even brutal fruits.

But now, the hour has come for the dragon to explode from his lair. Even now, few realize this, for many “Christians” fail to perceive that there is a dragon. But many will come to believe when, like a thief in the night, the dragon descends upon humanity in all his force:

He was a murderer from the beginning… he is a liar and the father of lies. (John 8:44)

When Jesus spoke these words, He was prophesying this present and coming battle, warning us as to the modus operandi of the enemy: a liar with the intent to murder. It is a battle for the inheritance of the earth, a battle to decide whose kingdom shall prevail—that of the “son of perdition” (Antichrist), or that of the Son of Man (and His Body):

…the dragon stood before the woman about to give birth, to devour her child when she gave birth. She gave birth to a son, a male child, destined to rule all the nations with an iron rod. (Rev 12:4-5)

‘Civilizations collapse slowly, just slowly enough so you think it might not really happen. And just fast enough so that there’s little time to maneuver.’ —The Plague Journal, from the novel by Michael D. O’Brien, p. 160

The goal of Satan is to collapse civilization into his hands, into a structure and system rightly called “a beast.” The goal in part is to not only control all aspects of his subject’s lives, but to reduce the population of the world. This is being accomplished through his minions: men and women who often belong to “secret societies” who operate, perhaps unknowingly, as the instruments of the Prince of Darkness:

There is in Italy a power which we seldom mention in this House… I mean the secret societies… It is useless to deny, because it is impossible to conceal, that a great part of Europe—the whole of Italy and France and a great portion of Germany, to say nothing of other countries—is covered with a network of these secret societies, just as the superficies of the earth are now being covered with railroads. And what are their objects? They do not attempt to conceal them. They do not want constitutional government; they do now want ameliorated institutions… they want to change the tenure of land, to drive out the present owners of the soil and to put an end to ecclesiastical establishments. Some of them may go further… —Prime Minister Benjamin Disraeli, addressing the parliamentary House, July 14th, 1856; Secret Societies and Subversive Movements, Nesta H. Webster, 1924.

They scoff; they speak with malice; from on high they plan oppression. They have set their mouths in the heavens and their tongues dictate to the earth. (Psalm 73:8)

Some of the biggest men in the United States, in the field of commerce and manufacture, are afraid of something. They know that there is a power somewhere so organized, so subtle, so watchful, so interlocked, so complete, so pervasive, that they had better not speak above their breath when they speak in condemnation of it. —U.S. President Woodrow Wilson, The New Freedom, 1913</em >

Today, these “secret” voices now speak openly in favor of reducing the world’s population, of forcing sterilization, of eliminating or facilitating the death of the “unwanted” or those who do not want to live. In a word, the chastisements coming upon the world are man-made—the seals of Revelation (6:3-8): orchestrated war, economic collapse, pandemics and famine. Yes, orchestrated.

By the envy of the devil, death came into the world: and they follow him that are of his side. (Wis 2:24-26; Douay-Rheims)

LISTEN TO THE PROPHETS!

At the forefront, prophetically warning the Church of this coming hour, was no less than the Holy Father himself:

Satan may adopt the more alarming weapons of deceit—he may hide himself—he may attempt to seduce us in little things, and so to move the Church, not all at once, but by little and little from her true position. I do believe he has done much in this way in the course of the last few centuries… It is his policy to split us up and divide us, to dislodge us gradually from our rock of strength. And if there is to be a persecution, perhaps it will be then; then, perhaps, when we are all of us in all parts of Christendom so divided, and so reduced, so full of schism, so close upon heresy. When we have cast ourselves upon the world and depend for protection upon it, and have given up our independence and our strength, then he may burst upon us in fury as far as God allows him… and Antichrist appear as a persecutor… —Venerable John Henry Newman, Sermon IV: The Persecution of Antichrist

Yes, evil has a name. And now it has a face: exitium—”destruction”.

DO NOT BE AFRAID!

As we watch the signs of these times unfold before our very eyes, we must remember that the Woman escapes the dragon’s mouth. That God’s providence is always with His Church whom He will never abandon. Hence, this same prophet, John Paul II, repeatedly encouraged us: “Do Not Be Afraid.” And so it is imperative to be sure that you are part of that true Church; that you are in a state of grace by frequent Confession, reception of the Holy Eucharist, and a life of faith connected to the Vine, who is Christ Jesus. His Mother, the Woman-Mary, has been given to us in these times to crush the dragon in our personal lives by carrying us in her bosom to her Son. She does this best, it seems, through our union to her in the Holy Rosary.

Yes, I believe if Catherine Doherty were alive today, she would tell us also: Don’t be afraid… but stay awake! In her thick Russian accent, I can almost hear her saying now…

Why are you asleep? What are you looking at if you cannot see the times you are in? Get up! Get up, soul! Don’t be afraid of anything except falling asleep! Repeat the name of Jesus, His Name, His powerful Name. His Name which overcomes all obstacles, which extinguishes all passions, and crushes every serpent. With the name of Jesus on your lips, look out the window at the gathering clouds, and with every confidence, speak His Name into the wind! Speak it now, and unleash into the streams of sorrow flooding the earth the true healing balm that every soul is longing for. Speak the Name of Jesus to every soul you meet, through your eyes, your words, your actions. Become the living Name of Jesus!

I read The Final Confrontation this weekend. The end result was hope and joy! I pray that your book will serve as a clear guide and explanation for the times we are in and the ones we are rapidly heading towards. —John LaBriola, author of Onward Catholic Soldier and Christ Centered Selling