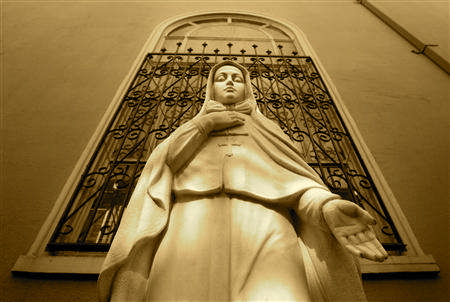 A FRIEND wrote me today, on this Memorial of the Queenship of the Blessed Virgin Mary, with a spine-tingling story:

Mark, an unusual incident occurred on Sunday. It happened as follows:

My husband and I celebrated our thirty-fifth wedding anniversary over the week-end. We went to Mass on Saturday, then out to dinner with our associate pastor and some friends, we later attended an outdoor drama “The Living Word.” As as anniversary gift a couple gave us a beautiful statue of our Lady with the baby Jesus.

On Sunday morning, my husband placed the statue in our entry-way, on a plant ledge above the front door. A while later, I went out on the front porch to read the bible. As I sat down and started to read, I glanced down into the flower bed and there lay a tiny crucifix ( I have never seen it before and I have worked in that flower bed many times!) I picked it up and went to the back deck to show my husband. I then came inside, placed it on the curio rack, and went to the porch again to read.

As I sat down, I saw a snake in the exact spot where the crucifix was.

I ran inside to call my husband and when we got to the porch again, the snake was gone. I haven’t seen it since!  This all happened within a few feet of the front door (and the plant ledge where we placed the statue!) Now, the crucifix could be explained, obviously someone could have lost it. Even the snake could could be explained as we have a wooded lot (though we haven’t seen any before!) but what can’t be explained is the sequence and timing of events.

I see the statue (the woman), the crucifix (the seed of the woman), and the snake, serpent, as significant to these times of course, but do you discern anything else from this?

What happened in this flower bed holds a powerful word for us today, if not one of the most significant things I’ll ever write.

In the flower bed once galled Eden, there was also a serpent and a woman. After the fall of Adam and Eve, God said to the tempter, the ancient serpent,

On your belly shall you crawl, and dirt shall you eat all the days of your life. (Gen 3:14)

To the woman, He says,

I will put enmity between you and the woman, and between your offspring and hers; He will strike at your head, while you strike at his heel. (v 15)

Since the very beginning, God declared there would be a battle not only between the offspring of the woman and the devil—Jesus (and His Church) and Satan—but that there would also be “enmity between you and the woman.” Hence, we see Mary—the mother of Jesus, the New Eve–has an apocalyptic role in the battle with the Prince of Darkness. It is a role instituted by Christ through the Cross, for,

…the Son of God was revealed to destroy the works of the devil… obliterating the bond against us, with its legal claims, which was opposed to us, he also removed it from our midst, nailing it to the cross; despoiling the principalities and the powers… (1 Jn 3:8, Col 2:14-15)

We see this apocalyptic role unfold in Revelations 12:

A great sign appeared in the sky, a woman clothed with the sun, with the moon under her feet, and on her head a crown of twelve stars. She was with child… Then the dragon stood before the woman about to give birth, to devour her child when she gave birth. She gave birth to a son, a male child, destined to rule all the nations with an iron rod….  When the dragon saw that it had been thrown down to the earth, it pursued the woman who had given birth to the male child… the serpent, however, spewed a torrent of water out of his mouth after the woman to sweep her away with the current. But the earth helped the woman… Then the dragon became angry with the woman and went off to wage war against the rest of her offspring...

This highly symbolic passage of “the woman” refers foremost to the people of God: Israel and the Church. But the symbolism also includes Eve and the New Eve, Mary, for reasons explicit in the passage. As Pope Pius X wrote in his Encyclical Ad Diem Illum Laetissimum regarding Revelations 12:1:

Everyone knows that this woman signified the Virgin Mary, the stainless one who brought forth our Head… John therefore saw the Most Holy Mother of God already in eternal happiness, yet travailing in a mysterious childbirth. (24.)

This Woman represents Mary, the Mother of the Redeemer, but she represents at the same time the whole Church, the People of God of all times, the Church that at all times, with great pain, again gives birth to Christ. —CASTEL GANDOLFO, Italy, AUG. 23, 2006; Zenit

God has ordained from the very beginning that this humble teenage Jewish girl would play a significant role in salvation history: that of gathering God’s children to herself so as to lead them safely to her Son, to salvation (hence we speak of the “Refuge of the Immaculate Heart”). That is, she would enter our spiritual battle.

Indeed, even today, a sword still pierces her heart as she intercedes from her lofty ledge for a fallen generation—the “flower bed of the world”—where the Cross of Christ has been eclipsed (momentarily) by the ancient serpent.

The snake in my friend’s flower bed, I believe, represents the great evils which have polluted this generation in the name of science. In particular, “embryonic stem cell research”, cloning, and experimentation with human/animal cross genetics; it also represents a great undermining of human dignity through a pandemic of pornography, redefinition of marriage, and the tragedies of abortion and euthanasia.

Humanity is teetering on a precipice of disaster once again.

And let us not say that it is God who is punishing us in this way; on the contrary it is people themselves who are preparing their own punishment. In his kindness God warns us and calls us to the right path, while respecting the freedom he has given us; hence people are responsible. –Sr. Lucia, one of the Fatima visionaries, in a letter to the Holy Father, 12 May 1982.

Scripture tells us clearly there is a battle between Mary and Satan. It would seem we are entering the climax of this battle, if one considers all the signs of the times.

We  know, from Church approved apparitions such as Fatima and other h istorical events, that her role is impacting human history. Our Lady of Fatima has been recognized by the Church as responsible for holding back an angel of judgment through her intercession, according to the Vatican’s release of the Third Part of the Secret of Fatima. And in recent times, Pope John Paul II wrote:

The grave challenges confronting the world at the start of this new Millennium lead us to think that only an intervention from on high, capable of guiding the hearts of those living in situations of conflict and those governing the destinies of nations, can give reason to hope for a brighter future.

The Church has always attributed particular efficacy to this prayer, entrusting to the Rosary… the most difficult problems. At times when Christianity itself seemed under threat, its deliverance was attributed to the power of this prayer, and Our Lady of the Rosary was acclaimed as the one whose intercession brought salvation. —Rosarium Virginis Mariae, 40; 39

It is crucial that we children hold tightly to Mary’s hand through the devotions the Church has given us, particularly the Rosary. Also significant, following in the example of the pope’s, is an act of consecration to her—an act of surrendering our spiritual childhood to our spiritual mother. In this way, we allow the Mother of God to strengthen and deepen our relationship with Jesus—quite the opposite of what the devil has led many well-meaning Christians to believe. He is out to discredit her. But she is ready.

As one priest puts it, “Mary is a lady—but she wears combat boots.”