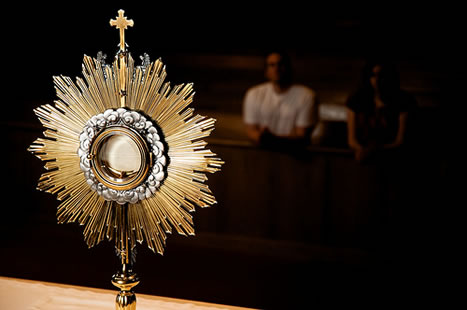 IN my travels throughout North America, I have been hearing remarkable conversion stories from young people. They are telling me about conferences or retreats they’ve attended, and how they are being transformed by an encounter with Jesus—in the Eucharist. The stories are almost identical:

I was having a difficult weekend, not really getting much out of it. But when the priest walked in carrying the monstrance with Jesus in the Eucharist, something happened. I have been changed ever since….

Before His death and resurrection, whenever Jesus encountered souls, they were drawn to Him immediately. Peter left his nets; Matthew left his tax tables; Mary Magdalene left her sinful lifestyle… But after the Resurrection, the appearance of Jesus did not immediately strike joy, but rather terror in those who saw Him. They thought He was a ghost until He began to reveal Himself through His Body…

On the road to Emmaus, two disciples stricken with grief by the crucifixion are met by the Lord. But they do not recognize Him until later that evening during the meal as He begins to break the bread.

When He appears to the rest of the Apostles in the upper room, they are struck with fear. So He says to them,

In the account in the Gospel of John, it says:

He showed them his hands and his side. The disciples rejoiced when they saw the Lord. (John 20:20)

Thomas would not believe. But once he touches the body of Jesus with his own hands, he exclaims,

My Lord and my God!

It is clear from the New Testament accounts that Jesus begins to reveal Himself to His followers after the Resurrection through His body itself—through Eucharistic signs.

BEHOLD THE LAMB OF GOD

I have written elsewhere that in the modern apparitions of our Blessed Mother, she is a type of Elijah, or John the Baptist (Jesus equates the two men as one.)

Lo, I will send you Elijah, the prophet, before the day of the LORD comes, the great and terrible day. (Mal 3:24)

What was the essential task of John? To prepare the way of the one coming after him. And when He came, John exclaimed:

Behold the Lamb of God who takes away the sin of the world! (John 1:29)

The Lamb of God is Jesus, the Paschal Sacrifice, the Blessed Sacrament. I believe our Blessed Mother is preparing us for a revelation of Jesus in the Holy Eucharist. It will be a time when the world at large will recognize His Presence among us. It will be an occasion of great joy for many, and for others, a moment of choice, and yet for others, an opportunity to be deceived by false signs and wonders which may follow.

This revelation of Jesus in the Holy Eucharist may be accompanied by the Breaking of the Seals (see Revelation 6.) Who is the one worthy to open the Seals?

Then I saw standing in the midst of the throne and the four living creatures and the elders, a Lamb that seemed to have been slain… He came and received the scroll from the right hand of the one who sat on the throne. (Rev 5:4, 6)

The Eucharistic Lamb is the centerpiece of Revelation! He is intimately tied to the judgment which begins to unfold in Scripture, for it was through the Paschal Sacrifice that justice was wrought. The Book of Revelation is in fact nothing less than a Divine Liturgy in the Heavens—the victory of Jesus Christ through His Death, Resurrection, and Ascension into Heaven being made present to us through the Sacrifice of the Mass.

The lion of Judah, the root of David, has triumphed, enabling him to open the scroll with its seven seals. (Rev 5:5)

You could say that eschatological events pivot on the Eucharist.

St. John weeps at first because no one is worthy to open the Seals. Perhaps his vision is in part about the kind of chaos we have on earth now, where the Liturgy has been obscured through abuses and an apostasy of the faith—hence, Christ’s letters to the seven churches at the beginning of Revelation, warning how they have fallen from their first love. And what is the Church’s first love but Jesus in the Holy Eucharist!

The Eucharist is ” the source and summit of the Christian life.” …For in the blessed Eucharist is contained the whole spiritual good of the Church, namely Christ himself, our Pasch. —Catechism of the Catholic Church, n. 1324

One could say that the great sign of the period preceding the end of the age will be a tremendous spread and deepening of Eucharistic Adoration. For it is clear that the remnant who follows Christ through the Great Trials will be a Eucharist-centered people:

“Do not damage the land or the sea or the trees until we put the seal on the foreheads of the servants of our God…” They stood before the throne and before the Lamb, wearing white robes and holding palm branches in their hands. They cried out in a loud voice: “Salvation comes from our God, who is seated on the throne, and from the Lamb…” These are the ones who have survived the time of great distress; they have washed their robes and made them white in the blood of the Lamb… For the Lamb who is in the center of the throne will shepherd them and lead them to springs of life-giving water… (Rev 7:3-17)

Their strength and transformation comes from the Lamb. No wonder the Lawless One will seek to remove the Daily Sacrifice!

THAT WHICH IS BUILT ON SAND IS CRUMBLING…

I have written here before that I believe the age of ministries as we know it is coming to an end. I believe the Lord will no longer tolerate His people wandering about in the Desert of Experimentation. In seeking the sublime, people have tried everything from renovating their churches, to altering the liturgical texts, to dancing barefoot in front of the altar; they have sought answers in enneagrams, enlightenment in labrynths, and gladness in gurus; they have changed the rules, re-written the rites, theologized, philosophied, and comprised in just about every way possible. And it has left the Western church emaciated.

It is time for the judgment to begin with the household of God… (1 Peter 4:17)

There will be nothing left to turn to which will satisfy, save what Christ has already given us to eat: the Bread of Life. Jesus—not our strategies or programs—will be recognized as the source of healing and life.

The false prophets are growing louder as the the Rider Upon the White Horse nears. He is coming soon. And when we see Him, we shall cry out: Behold, the Lamb of God!