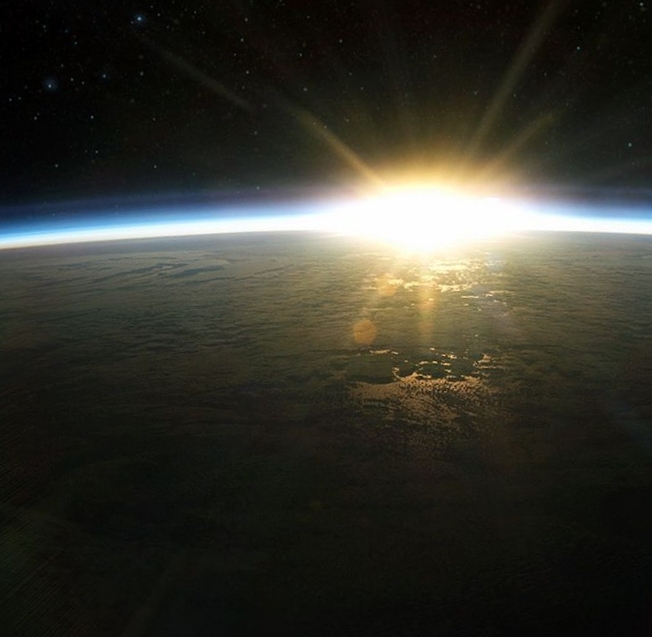 WHEN I wrote The Great Meshing before Christmas, I concluded saying,

…the Lord began to reveal to me the counter-plan:  The Woman Clothed with the Sun (Rev 12). I was so full of joy by the time the Lord was finished speaking, that the plans of the enemy seemed minuscule in comparison. My feelings of discouragement and a sense of hopelessness vanished like fog on a summer morning.

Those “plans” have hung in my heart for over a month now as I’ve eagerly awaited the Lord’s timing to write of these things. Yesterday, I spoke of the veil lifting, of the Lord granting us fresh understandings of what is approaching. The last word is not darkness! It is not hopelessness… for just as the Sun is quickly setting on this era, it is racing toward a new Dawn…

THE PASSION, THE RESURRECTION, THE ASCENSION

The Lord has given us warnings to “watch and pray” as the Church moves toward Gethsemane. Like Jesus our Head, the Church, His Body, will go through its own Passion. I believe this lies directly before us.

When she emerges from these times, she will experience the “Resurrection.” But I am speaking neither of a “rapture” nor of the return of Jesus in the flesh. That will occur, but only when Christ returns to the earth at the end of time to “judge the living and the dead.” That Day, one could say, will be the Ascension of the Church.

But between the Passion of the Church, and its eventual glorious Ascension into Heaven, there will be a period of Resurrection, of peace—a time known as the “Era of Peace.” I hope here to be able to shed light on that which is firmly rooted in Scripture, the Church Fathers, many saints, mystics, and approved private revelations.

Then I saw an angel coming down from heaven, holding in his hand the key of the bottomless pit and a great chain. And he seized the dragon, that ancient serpent, who is the Devil and Satan, and bound him for a thousand years, and threw him into the pit, and shut it and sealed it over him, that he should deceive the nations no more, till the thousand years were ended. After that he must be loosed for a little while. Then I saw thrones, and seated on them were those to whom judgment was committed. Also I saw the souls of those who had been beheaded for their testimony to Jesus and for the word of God, and who had not worshiped the beast or its image and had not received its mark on their foreheads or their hands. They came to life, and reigned with Christ a thousand years.

What is to be understood here is not a literal thousand year period. Rather, it is an allegorical description of an extended period of peace. And neither is it to be a reign of Christ Himself on earth. This is an early heresy condemned by several Church Fathers as “millenarianism.” Rather, it will be a reign of Christ in the hearts of His faithful—a reign of His Church in which she accomplishes her twofold mission to preach the Gospel to the very ends of the earth, and to prepare herself for the return of Jesus at the end of time.

Just as many tombs were opened and the dead were raised at Christ’s resurrection (Matt 27:51-53), so too will the martyrs be “raised” to “reign with Christ” during this period. Perhaps the remnant Church—those whom God’s angels had sealed during the preceding tribulation—will see them, if not briefly, much the same way the resurrected souls at Christ’s time appeared to many in Jerusalem. In fact, Fr. Joseph Iannuzzi, perhaps the foremost scholar of Church tradition and biblical understanding on the Era writes,

During the Era of Peace, Christ will not return to definitively reign on earth in the flesh, but will “appear” to many. As in the the Book of Acts and in the Gospel of Matthew, Christ made “apparitions” to his elect of the newborn Church shortly after his resurrection from the dead, so during the Era of Peace Christ will appear to the remnant survivors and their offspring. Jesus will appear to many in his risen body and in the Eucharist…

God spiritually recalls to life those that have died in Christ to instruct the faithful remnant that has survived the tribulation. —Antichrist and the End Times, pp. 79, 112

REIGN OF JUSTICE AND PEACE

This period is what has become known in Catholic tradition not only as “the Era of Peace,” but as the “Triumph of the Immaculate Heart of Mary,” the “Reign of the Sacred Heart of Jesus,” the “Eucharistic Reign of Christ,” the “period of peace” promised at Fatima, and the “new Pentecost.” It’s as though all these various concepts and devotions are beginning to converge into one reality: a period of peace and justice.

During this time, the Gospel will reach the furthest ends of the earth. While technology and missionary work has done much to bring the words of the Gospel to the nations, it is clear that the reign of Christ has not yet been fully and universally established. Scripture speaks of a time when all the world will know the sa ving power of the Lord:

So shall your rule be known upon the earth, your saving power among all the nations. (Psalm 67:3)

It speaks of a time when wickedness will be purged:

A little longer—and the wicked shall have gone. Look at his place, he is not there. But the humble shall own the land and enjoy the fullness of peace. (Psalm 37)

Blessed are the meek, for they shall inherit the earth. (Matt 5:5)

Jesus alludes to such a time occurring at the end of the age (not the end of time). It would happen after those tribulations written of in Matthew 24:4-13, but before the final battle with evil.

…this gospel of the kingdom will be preached throughout the whole world as a testimony to all nations; and then the end will come.  (vs 14)

It will bring about the unity of the churches; it will see the conversion of the Jewish people; and atheism in all it’s forms will cease until Satan is loosed for a short time before Christ returns to place all His enemies beneath His feet.

“And they shall hear my voice, and there shall be one fold and one shepherd.” May God… shortly bring to fulfillment His prophecy for transforming this consoling vision of the future into a present reality… It is God’s task to bring about this happy hour and to make it known to all… When it does arrive, it will turn out to be a solemn hour, one big with consequences not only for the restoration of the Kingdom of Christ, but for the pacification of… the world. We pray most fervently, and ask others likewise to pray for this much-desired pacification of society. —Pope Pius XI, Ubi Arcani dei Consilioi “On the Peace of Christ in his Kingdom”

A FUTURE OF HOPE

Satan does not have the last say on earth. The times directly ahead of the Church and the world will be difficult. It is a time of purification. But God is completely in control:  nothing happens—not even evil—that He does not permit in order to bring about a greater good. And the greater good which God is bringing about is the Era of Peace… an era which will prepare the Bride to receive her King.