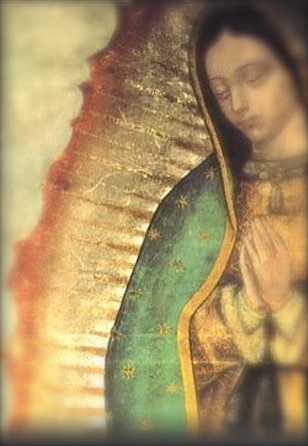 DURING prayer before the Blessed Sacrament, a deeper understanding of Revelation seemed to unfold in a broader and more historical context…. The confrontation between the Woman and the Dragon of Revelation 12, is primarily an assault directed toward the priesthood.

A great sign appeared in the sky, a woman clothed with the sun, with the moon under her feet, and on her head a crown of twelve stars. She was with child and wailed aloud in pain as she labored to give birth.(Rev 12:1-2)

This Woman, says Pope Benedict, is both Mary and the Church. The dragon, Satan, pursues her:

Then another sign appeared in the sky; it was a huge red dragon… Its tail swept away a third of the stars in the sky and hurled them down to the earth. (Rev 12:3)

Pope Paul VI helps us to understand precisely what the dragon is doing:

The tail of the devil is functioning in the disintegration of the Catholic world. The darkness of Satan has entered and spread throughout the Catholic Church even to its summit. Apostasy, the loss of the faith, is spreading throughout the world and into the highest levels within the Church. —Address on the Sixtieth Anniversary of the Fatima Apparitions, October 13, 1977

The “stars” in Revelation often refer to spiritual authorities, angelic or human (cf. Rev 1:20). In this context, the tail of the dragon is operating so as to drag a third of the clergy into apostasy. The attack on the Woman, is therefore, first and foremost, an attack on the priesthood of the Catholic Church.

The dragon is especially preparing to devour the Holy Father:

Then the dragon stood before the woman about to give birth, to devour her child when she gave birth. She gave birth to a son, a male child, destined to rule all the nations with an iron rod. Her child was caught up to God and his throne. (Rev 12:4-5)

On a Marian level, the one who is to rule all the nations with an iron rod is Jesus, Mary’s Son.

On the level of the Woman-Church, it is the birth of the one who rules in Christ’s stead as his vicar on earth, carrying not his own rod, but that of the Good Shepherd. For Jesus said to Peter:

The pinnacle of the attack is upon the Holy Father, since it is he who infallibly guides the Church; it is he who is a visible sign of unity in Christ’s Church; it is he who keeps the flock directed along the Way toward the green pastures of Truth and ultimately eternal Life. Strike the shepherd, and the sheep are scattered (Matt 26:31). According to several mystics, including some popes, at the climax of this attack upon the Holy Father he will be assassinated.

I saw one of my successors taking to flight over the bodies of his brethren. He will take refuge in disguise somewhere; after a short retirement [exile] he will die a cruel death. The present wickedness of the world is only the beginning of the sorrows which must take place before the end of the world. —POPE PIUS X, Catholic Prophecy, p. 22

This could mean many things: one, is that the “male child” dies and is taken to heaven; or another, that the “son” is simply protected from being swept away with the other “stars”:

For you have died, and your life is hidden with Christ in God. (Col 3:3)

Whatever the meaning, the dragon fails to “devour” the child, just as Satan failed to destroy Jesus through Herod’s massacre.

THE REST OF HER OFFSPRING

The dragon continues to pursue the Woman, according to St. John. That is, a persecution primarily aimed at the clergy. However, the dragon fails to destroy the priesthood entirely. There is a remnant of priests who remain faithful and protected who will lead the Church in an Era of Peace.

The attack on the priesthood has been evident for several centuries (as I point out in my new book coming out this Summer: The Final Confrontation), however, no more so than during the past 40 years. Since Vatican II, there has been a systematic demolition of the Catholic Faith through erroneous interpretations of that Council. Many pinpoint this corruption of the faith to an infiltration of Freemasonry within some ranks of the Vatican itself. “Liberal theology” and a general slackening of the faith have resulted in what several Holy Fathers have described as a Church now in a state of “apostasy.”

But having failed to consume the Woman-Church, that is, the entire clergy, St. John says,

Then the dragon became angry with the woman and went off to wage war against the rest of her offspring, those who keep God’s commandments and bear witness to Jesus. It took its position on the sand of the sea. (Rev 12:17).

The “rest of her offspring” being those who form especially the “heel” of the Woman, the laity. At the turn of the millennium, Pope John Paul II recognized the extraordinary role the laity would begin to play in these times:

…the Second Vatican Ecumenical Council marked a decisive turning-point. With the Council the hour of the laity truly struck, and many lay faithful, men and women, more clearly understood their Christian vocation, which by its very nature is a vocation to the apostolate. —Rediscover the Council’s Wealth , November 26th, 2000, n.4

In fact, he charged the laity themselves with taking up the documents of Vatican II and spreading their wealth.

In particular, you lay people must again take those documents in hand. To you the Council opened extraordinary perspectives of commitment and involvement in the Church’s mission. Did the Council not remind you of your participation in the priestly, prophetic and kingly office of Christ? —Ibid.

Indeed, it has primarily been the lay faithful, through several powerful movements in the Church, who are making disciples of the nations. Thus, it is toward the lay faithful that eventually the dragon will turn his anger. But at first, as Satan has always done in the past, it will ultimately be through stealth—deception. And this deception will come in outward form as a New World Order in which all of mankind will eventually be forced to participate in that system in order to “buy and sell” to survive.

The harmony and understanding required for responsible governance is increasingly understood to be a global government, with a global ethical framework. —Jesus Christ, The Bearer of the Water of Life, n. 2.3.1, Pontifical Councils for Culture and Inter-religious Dialogue

Fascinated, the whole world followed after the beast. (Rev 13:3)

In such a way, the laity will be directly attacked. They will either participate in the New Order by acquiescing to it’s religion of “tolerance” or they will be excluded—or eliminated. This is what we hear in today’s Gospel:

We see the first signs of this growing isolation through belligerent court systems and a generalized tolerance of injustice toward Christian freedom of religion and speech.

Following Christ demands the courage of radical choices, which often means going against the stream… we must not hesitate to give even our lives for Jesus Christ… You face tasks and goals which may seem to exceed human forces. Do not lose heart! “He who began a good work in you will bring it to completion” (Phil 1:6). —Rediscover the Council’s Wealth , November 26th, 2000, n.4, 5

Indeed, many will give their lives for Christ while others will courageously carry the authentic spirit of Vatican II, of the Gospel, into a new era. For in the end, “the beast” does not succeed in ejecting Christianity entirely from the human sphere. It’s culture of death implodes on itself, and through a divine intervention, “the Beast” (Antichrist) and the False Prophet are cast into the “lake of fire” (cf. 2 Thess 2:8; Rev 19:20). It is a victory of Christ, and His Body, the Church. Especially the Woman’s heel.

The dragon is chained, and for a “thousand years,” that is, an extended period, peace and justice are restored to the earth (Rev 20:4). And a faithful and revived priesthood bring Christ’s Eucharistic reign to the very ends of the earth.

I see more martyrs, not now but in the future. I saw the secret sect [Freemasonry] relentlessly undermining the great Church. Near them I saw a horrible beast coming up from the sea. All over the world, good and devout people, especially the clergy, were harassed, oppressed, and put into prison. I had the feeling they would become martyrs one day. When the Church had been for the most part destroyed by the secret sect, and when only the sanctuary and altar were still standing, I saw the wreckers enter the Church with the Beast. There, they met a woman of noble carriage who seemed to be with child, because she walked slowly. At this sight, the enemies were terrorized, and the Beast could not take but another stop forward. It projected its neck towards the Woman as if to devour her, but the Woman turned about and bowed down (towards the Altar), her head touching the ground. Thereupon I saw the Beast taking to flight towards the sea again and the enemies were fleeing in the greatest confusion. Then, I saw in the distance great legions approaching. In the foreground I saw a man on a white horse. Prisoners were set free and joined them. All the enemies were pursued. Then, I saw that the Church was being promptly rebuilt, and she was more magnificent than ever before.—Blessed Anna-Katharina Emmerich, May 13th, 1820; excerpted from Hope of the Wicked by Ted Flynn. p.156