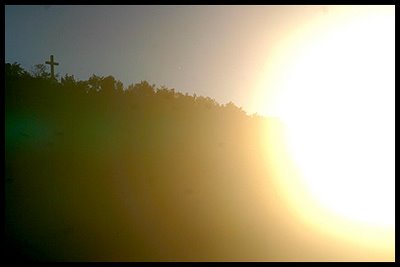 An attempt to photograph the “miracle of the sun”

Before the Day of Justice, I am sending the Day of Mercy. —Diary of Divine Mercy, n. 1588

This sequence is presented on the Cross:

(MERCY:) Then [the criminal] said, “Jesus, remember me when you come into your kingdom.” He replied to him, “Amen, I say to you, today you will be with me in Paradise.”

(JUSTICE:) It was now about noon and darkness came over the whole land until three in the afternoon because of an eclipse of the sun. (Luke 23:43-45)

MIRACLE OF THE SUN

Throughout the world, God has permitted believers and non-believers alike to witness the “miracle of the sun.” In most cases, it is similar to the account recently sent to me:

Mark, what I am about to tell you you will not believe, but that’s o.k. I am going to tell you anyway because it involves a song of yours, Queen of Heaven. Around  5:30 P.M. I was driving to the Nursing Home to visit my parents. It was warm outside and there were a few clouds in the sky………..I was not thinking about much at all…… just enjoying the quiet…….suddenly, it got very bright outside and I glanced up at the Sun. It looked like a white disc and glowed, then it became bright,  it moved toward me,  then back, then to the side, then a rose color appeared around it. I simply could not take my eyes off it.  It would briefly dart behind a cloud, then appear again moving forward, then back again. Then it would move to the side. Then a rainbow of colors appeared over top…….  It was brilliant and beautiful. ………I listened to your song:  “…and you, you take our prayers and you wrap them in your mantle of love” ………….I couldn’t take my eyes off the Sun (I know I was driving but it was as if my car was being guided by itself). It seemed to dance or move as the song played……. then the song ended and the Sun was gone. So, I pushed the CD  button to replay Queen of Heaven, and as soon as the song started, the Sun came out and did the same as before………..as soon as I pulled into the Nursing Home parking lot the song was over and immediately the Sun was no longer visible……..

I’m having trouble believing it myself…..and I saw it! What does it mean? All I can say is……. “Someone must love us very much!”

Though I have never seen this miracle myself (at the time of this writing), the Lord seems to be providing meaning, as I write to you while sitting before the Blessed Sacrament.

The dancing of the sun, the pulsation, and the rainbow of colors represent the Lord’s burning LOVE and MERCY, His promise to forgive and grant eternal life to whomever will trust Him. Jesus can barely contain His passion for us! As He poured out His Mercy upon the Thief so readily, so generously, so lovingly, Jesus wishes to pour out a deluge of Mercy on this generation. His heart dances with love.

The appearance of an “eclipse,” though, is a warning to us. The obstinacy of the world, its unwillingness to receive this Mercy, will result in a painful purification—one of the consequences being “the eclipse of the Son.”

During the Veneration of the Cross on Good Friday, interiorly I distinctly saw Christ crucified. I was positioned directly above Him, and the entire planet was beneath Him. His Blood was covering the whole earth, but I heard Him say,

Does anyone hear my voice?

THE ECLIPSE OF THE SON

As I wrote in The Smoldering Candle, there is coming a time when the “light of Christ” will seem extinguished in the world because of this unrepented obstinacy. This Light is foremost “truth” whose summit is the Eucharist.

In seeking the deepest roots of the struggle between the “culture of life” and the “culture of death”… We have to go to the heart of the tragedy being experienced by modern man: the eclipse of the sense of God and of man. —POPE JOHN PAUL II, Evangelium Vitae, n.21

The coming persecution—which is beginning to manifest like the first few billows of smoke from an erupting volcano—will bring about the closure of churches and the cessation of the public celebration of the “daily sacrifice.” Those who think this is not possible should pause for a moment to examine how the removal of the Ten Commandments, the Crucifix, Manger scenes, prayer, free speech, and the mention of God in public life has already occurred. This in fact is already the beginning of the purification:

There will be tremendous sorrow when the Daily Sacrifice, the Mass, is forbidden—save for those Holy Sacrifices offered in the hiding places. Today, even the secular world has no idea how the quiet daily sacrifices of the Mass keep the world from self-destruction. As St. Pio said,

The earth could exist more easily without the sun than without the Holy Sacrifice of the Mass.

For a brief time, the Son will be obscured:

This obscurity will occur through the “Prince of Sin,” a false light, a false Christ: the Antichrist. After all, Lucifer from the Latin means “light-bearer.”

The spirit of Antichrist will attempt to mimic Christ as I wrote in Trumpets of Warning–Part V. But his light is lifeless and cold, generating not love, but counterfeit forms of “Tolerance,” “Humaneness,” and “Equality” (see The False Unity). The color of diversity will eventually be displaced with the dullness of uniformity through a deceptive spirit of control.

“Sometimes diversity makes people afraid. That’s why we shouldn’t be surprised if the human being prefers monotony and uniformity…” Certain political-economic systems… “have reduced and reduce the human being to an unworthy slavery at the service of one ideology or an inhumane and pseudo-scientific economy…” —POPE BENEDICT XVI, December 18th, 2008; Zenit.org

Since this “Dead Moon” cannot produce its own light, it must generate a false light:

The coming of the lawless one by the activity of Satan will be with all power and with pretended signs and wonders, and with all wicked deception for those who are to perish, because they refused to love the truth and so be saved.  (2 Thess 3:9-10)

For a brief period, this Dead Moon will appear to eclipse the Son, replacing the Light of the Eucharistic Jesus with itself (an “abomination.”) But in reality, as the Antichrist appears to eclipse Christ—no real light will shine from the Dead Moon, and the world will be cast into a terrible darkness called Fear. It will coincide with the bloody persecution, the “crucifixion” of the Body of Christ.

…darkness came over the whole land until three in the afternoon because of an eclipse of the sun.

Yes, if “perfect love casts out all fear” as St. John says, there will come a time when, for a brief period, perfect fear will cast out all love.

But just as the moon is thousands of times smaller than the solar sun, so too is the power of Antichrist miniscule compared to Christ: the lawless one will be consumed in the fires of Divine Justice.

During the eclipse of the Sun, there will be that interior light I wrote of in The Smoldering Candle. It is a light which must be lit now. The oil of one’s lamp—that is, faith in one’s heart—must be stored up now… for then it will be too late (Matt 25:3). Why? The Light of Jesus, which is the spark that ignites the divine flame of Truth in the heart and mind, will have been momentarily smothered—just as today, on Holy Saturday, the life of Jesus appears destroyed in the darkness of the tomb.

But there is also one other light which will guide the remnant flock: the Blessed Mother. She will appear in the spiritual skies as a star—our Northern Star. As I wrote in Stars of Holiness,

There is only one star in the sky which does not seem to move. It is Polaris, the “North Star”.  All other stars appear to circle around it. The Blessed Virgin Mary is that Star in the celestial skies of the Church.

…the North Star is used to navigate, especially when it is very dark. Polaris is medieval Latin for ‘heavenly’, derived from the Latin, polus, which means ‘end of an axis.’ Yes, Mary is that heavenly star which is leading us to the end of an era. She is leading us to a new dawn when the Morning Star will rise, Christ Jesus our Lord, shining anew upon a purified people.

Unlike the Dead Moon which attempts to replace the Son’s light, the Blessed Mother is the “woman clothed with the sun.” United to Jesus, she has become a burning “sun,” set aflame through the union of her heart to the flaming Sacred Heart of the Living Son.

Yes, the Dead Moon is “under her feet.” In the miraculous image of Our Lady of Guadalupe, whom Pope John Paul calls the “Star of the new evangelization,” we see her standing on a crescent moon: a symbol of Quetzalcoatl, the feathered serpent moon-god, or “god of the night and darkness.” To the Woman, who is also a symbol of the Church, is given the power to crush this false god:

I will put enmities between thee and the woman, and thy seed and her seed: she shall crush thy head, and thou shalt lie in wait for her heel. (Genesis 3:15; Douay-Rheims)

Indeed, the “gates of hell” will not prevail against the Church in this coming persecution.  Rather it will serve to purify her, and prepare her for the New Dawn, the coming of He who is the true and everlasting “morning star.”

St. Malachy of Ireland (1094-1148) is well known for his purported vision of the remaining popes of the Church which were recorded in a manuscript and given to Pope Innocent II. According to his vision, Pope John Paul II would be ascribed the motto,  “The Labor of the Sun”. This is the same Pope who proclaimed in 1976 that we are now living in the “final confrontation” of the Church with the “anti-church.”

[John Paul II] was born on May 18, 1920, on the day of an eclipse of the sun. Likewise, his funeral took place on the day of a solar eclipse. Pope John Paul II was intensely devoted to the Blessed Mother… “a woman clothed with the sun…” —Sean Patrick Bloom, Catholic Prophecy, P. 35

There will be signs in the sun, the moon, and the stars, and on earth nations will be in dismay, perplexed by the roaring of the sea and the waves. (Luke 21:25)

The Lord is my light and my salvation. Whom shall I fear? (Psalm 27:1)