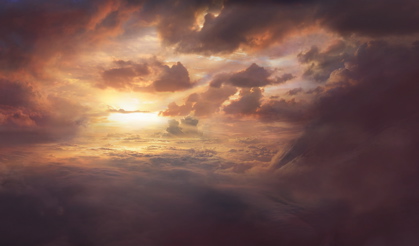 POPULAR among many Evangelicals and even some Catholics is the expectation that Jesus is about to return in glory, commencing the Final Judgment, and bringing about the New Heavens and New Earth. So when we speak of a coming “era of peace,” does this not conflict with the popular notion of Christ’s imminent return?

Since Jesus ascended into Heaven, His return to earth has always been imminent.

This eschatological coming could be accomplished at any moment, even if both it and the final trial that will precede it are “delayed”. —Catechism of the Catholic Church, n. 673

The glorious Messiah’s coming is suspended at every moment of history until his recognition by “all Israel”, for “a hardening has come upon part of Israel” in their “unbelief” toward Jesus.  St. Peter says to the Jews of Jerusalem after Pentecost: “Repent therefore, and turn again, that your sins may be blotted out, that times of refreshing may come from the presence of the Lord, and that he may send the Christ appointed for you, Jesus, whom heaven must receive until the time for establishing all that God spoke by the mouth of his holy prophets from of old.”    —CCC, n.674

St. Peter speaks of a time of refreshment or peace derived from the presence of the Lord. The “holy prophets from of old” spoke of that time which the Early Church Fathers interpreted not only as spiritual, but also as a period when men shall live on earth fully in grace and at peace with one another..

But now I will not deal with the remnant of this people as in former days, says the LORD of hosts, for it is the seedtime of peace: the vine shall yield its fruit, the land shall bear its crops, and the heavens shall give their dew; all these things I will have the remnant of the people possess. (Zec 8:11-12)

It shall come to pass in the latter day that the mountain of the house of the LORD shall be established as the highest of the mountains, and shall be raised above the hills and all the nations shall flow to it… For out of Zion shall go forth the law, and the word of the LORD from Jerusalem. He shall judge between the nations, and shall decide for many peoples; and they shall beat their swords into plowshares, and their spears into pruning hooks; nation shall not lift up sword against nation, neither shall they learn war any more. (Isaiah 2:2-4)

These times of refreshment, which will emerge after the three days of darkness, will come from the presence of the Lord, that is, His Eucharistic Presence which will then be universally established. Just as the Lord appeared to His Apostles after His resurrection, so too, He may appear throughout the earth to the Church:

Both the prophets and the Early Church Fathers saw a time when Jerusalem would become the center of Christianity, and the hub of this “era of peace.”

A man among us named John, one of Christ’s Apostles, received and foretold that the followers of Christ would dwell in Jerusalem for a thousand years, and that afterwards the universal and, in short, everlasting resurrection and judgment would take place. —St. Justin Martyr, Dialogue with Trypho, The Fathers of the Church, Christian Heritage

This time of refreshment, or symbolic period of a “thousand years” is the beginning of what Scripture calls “the Day of the Lord.”

The dawn of this new Day begins with the judgment of the nations:

Then I saw the heavens opened, and there was a white horse; its rider was (called) “Faithful and True”… Out of his mouth came a sharp sword to strike the nations… Then I saw an angel come down from heaven… He seized the dragon, the ancient serpent, which is the Devil or Satan, and tied it up for a thousand years… (Rev 19:11, 15; 20:1-2)

This is a judgment, not of all, but only of the living on earth that climaxes, according to the mystics, in three days of darkness. That is, it is not the Final Judgment, but a judgment which purifies the world of all wickedness and restores the Kingdom to Christ’s betrothed, the remnant left upon the earth.

In all the land, says the LORD, two thirds of them shall be cut off and perish, and one third shall be left. I will bring the one third through fire, and I will refine them as silver is refined, and I will test them as gold is tested. They shall call upon my name, and I will hear them. I will say, “They are my people,” and they shall say, “The LORD is my God.” (Zec 13:8-9)

THE PEOPLE OF GOD

The “thousand year” period, then, is the period in history in which the plan of salvation coalesces, bringing about the unity of the entire people of God: both Jews and Gentiles.

The “full inclusion” of the Jews in the Messiah’s salvation, in the wake of “the full number of the Gentiles”, will enable the People of God to achieve “the measure of the stature of the fullness of Christ”, in which “God may be all in all”. —CCC, n. 674

During this period of peace, people will be forbidden to carry weapons, and iron will be used only for making agricultural implements and tools. Also during this period, the land will be very productive, and many Jews, heathens and heretics will join the Church. —St. Hildegard, Catholic Prophecy, Sean Patrick Bloomfield, 2005; p.79

This unified and singular People of God will be refined as silver, drawing them into the fullness of Christ,

…that he might present to himself the Church in splendor, without spot or wrinkle or any such thing, that she might be holy and without blemish. (Eph 5:27)

It is after this time of purification and unification, and the rise of a final satanic revolt (Gog and Magog) that Jesus will return in glory. The Era of Peace, then, is not simply a random phase in history. Rather it is the red carpet upon which the Bride of Christ begins her ascent toward her beloved Groom.

[John Paul II] does indeed cherish a great expectation that the millennium of divisions will be followed by a millennium of unifications.  —Cardinal Joseph Ratzinger (POPE BENEDICT XVI), Salt of the Earth, p. 237