WHEN I wrote Part I of this series two weeks ago, the image of Queen Esther came to mind, standing in the gap for her people. I felt there was something more significant about this. And I believe this email I received explains why:

The significance of this (having the left hand broken off) is in Mary’s role as “Queen of Heaven” or Queen Mother. In traditional royalty, the king holds the Staff or Rod that represents his power in his right hand. It’s this staff that is used to execute judgment or mercy. If you ever watched “A Night With The King”, Esther should have been executed for coming into the king’s presence without being invited; however, she was spared because the king touched her with his staff, which he held in his right hand.

The queen (or queen mother, in the case of the Israelites) often acted as an intermediary between the people and the king. This is because the queen mother alone could enter the king’s presence without being summoned. She would be seated “at the king’s right hand.” In this case, her left hand is the hand that she would use to restrain the judgment of the king, by restraining the king’s right hand. For all these statues of Mary to suddenly lose their left hands could be seen as Mary, Queen of Heaven, withdrawing her left hand. She is no longer restraining the right hand of the King, allowing the King’s Judgment to be executed upon the people.

THE TIMES OF THE ‘TRUMPETS’ HAVE BEGUN

Over this past weekend, the title of this series of writings became clearer to me. I felt the Lord saying that what is unfolding are the Trumpets of Warning which I wrote two years ago. That those events and times are beginning to unfold now for the world and the Church in a definitive manner.

In Part IV of the Trumpets of Warning, I heard the word “Exiles.” Since then, we are seeing tremendous shifts of populations within China, Africa, Indonesia, Haiti, and America where tens of thousands of people are being forced from their homes into exile due to natural disasters and genocide. This is just the beginning. We all need to be prepared.

The other type of exiles are the “spiritual” ones—Christians forced to flee from persecution. As I write this, terrible persecutions are exploding in India where priests are being murdered, nuns raped, and thousands of Christian homes and many churches are being razed to the ground. But how far is this from North America? A very humble American priest said to me that not long ago, St. Thérese the Little Flower appeared to him saying,

Soon priests are not going to be able to enter the churches and the faithful will carry the ciboria containing the Blessed Sacrament to those hungry for the “kiss of Jesus.”

Some people might wonder how—how this persecution could happen? I will offer two words which I and others have heard in our hearts lately: “martial law.” In the midst of chaos, most governments have the power to suspend and supercede civil laws in order to bring back civil order. Unfortunately, this power can also be abused. We also see, as is the case in India, roaming gangs carrying out these persecutions, often with police standing by and doing nothing.

I hesitated to write this. However, that same priest felt an urge to call me as I was finishing this writing yesterday. He said, regarding coming times in general:

We won’t have time to react. Those who are prepared will know what to do. Don’t be afraid to sound the alarm. Those tuned in to the Holy Spirit will be grateful for the alarm.

In Part V, I wrote about a coming spiritual hurricane that would coincide with a time of chaos and confusion. It is from this present period of turbulence that I believe we may see the rise of global totalitarianism, and that the conditions for this are rapidly falling into place. Words which came to me as I flew back to Canada earlier this week…

Before the Illumination, there will be a descent into chaos. All things are in place, chaos has already begun (food and fuel riots have started; economies are collapsing; nature is wreaking havoc; and certain countries are aligning to strike at the appointed time.) But in the midst of the shadows, a Bright Light will rise, and for a moment, the landscape of confusion will be softened by the Mercy of God. A choice will be presented: to choose the light of Christ, or the darkness of a world illumined by a false light and empty promises.

And then I sensed Jesus saying,

Tell them not to be startled, afraid, or to panic. I have told you these things beforehand, so when they happen, you will know that I AM with you.

Listen to the words of St. Cyprian, whose memorial we celebrated yesterday:

Divine providence has now prepared us. God’s merciful design has warned us that the day of our own struggle, our own contest, is at hand… fastings, vigils, and prayers in common. These are the heavenly weapons which give us the strength to stand firm and endure; they are the spiritual defenses, the God-given armaments that protect us… by the love we share we shall thus relieve the strain of these great trials —St. Cyprian, bishop and martyr; Liturgy of the Hours, Vol IV, p. 1407; these words are taken from the Second Reading of the September 16th memorial. Once again, I am in awe at the timing of the Church’s liturgical readings and how they overlap the words which I am hearing in my heart. This has been happening for three years. But it still fills me with wonder!

Again, the image which has been so prominent in my heart is that of a hurricane, with the Eye of the Storm being the period beginning with and following the Illumination (keeping in mind too that many souls are already experiencing an illumination of truth in their hearts). But as we know, the storm becomes more fierce and powerful the closer one goes toward the eye. These are the winds of change we are feeling now.

Once again, I sense that we are going to see the breaking of the Seals of Revelation on a new level now (see Breaking of the Seals and Seven Year Trial – Part II). We are beginning to see the collapse of the world’s economic system which will, in part, pave the way for a New World Order. In commenting on whether this was a conspiracy theory or not, a Canadian priest said to me, “What do you mean “theory?” This is the plan of the “Illuminati” and those who own the world banking systems. It is no secret. It is not theory.” Indeed, even the Vatican has acknowledged this movement towards a New World Order in its document on the “new age.” But in case one still suspects such talk to be radical thinking, here’s what was said on Wall Street this past Monday:

The tectonic plates beneath the world financial system are shifting, and there is going to be a new financial world order that will be born of this. —Peter Kenny, Managing Director, Knight Capital Group Inc., a New Jersey based brokerage company that handles one trillion dollars worth of stock transactions each quarter; Bloomberg, September 15th, 2008

There has been a quickening in many hearts to pray and intercede for souls in the world. Perhaps it is because we are facing a very difficult moment. As I wrote recently, I believe we are seeing the first movements of this—the drums of war—in the recent and unexpected actions of Russia. Perhaps even more stunning is their abrupt movement of military aircraft (and now navy ships) into Venezuela last week as I was writing this series. And here is where I want to return to the words of Venezuelan mystic, Maria Esperanza:

Be careful, especially when all seems to be peaceful and calm. Russia may act in a surprise way, when you least expect it… [God’s] justice will begin in Venezuela. —The Bridge to Heaven: Interviews with Maria Esperanza of Betania, Michael H. Brown, p. 73, 171

[From a CNN report on September 22nd, added after this was published]:

During the Cold War, Latin America became an ideological battleground between the Soviet Union and the United States. —www.cnn.com, September 22nd, 2008

Again, Maria may shed some more light on the mystery of these broken left hands on Marian statues (I am still receiving letters from many more readers who are suddenly finding their statues broken):

For now, God is holding back the arms of terrorists with His right arm. If we pray and honor Him, He will stop everything. Right now He is stopping things because of Our Lady. She is involved in many things to defeat the enemy, and this moment needs a lot of peace. Injustice is reigning right now, but Our Lord is fixing everything. —The Bridge to Heaven: Interviews with Maria Esperanza of Betania, Michael H. Brown, p. 163

Our Lord is in control. But He counts upon our prayers, and we must intensify them! While I believe certain events are now inevitable, we can still bring many souls to Jesus!

Change is here. The Great Storm has arrived. But Jesus is walking on water in the midst of it. And He calls out to us now:

Be not afraid! For my justice is mercy, and my mercy is just. Remain in My love, and I will remain in you.

I believe we have entered the days of monumental change which, when they are over, will culminate in an Era of Peace. These are going to be glorious, difficult, remarkable, powerful, and painful times. And Christ and His Church will triumph!

The power of love is stronger than the evil which threatens us. —POPE BENEDICT XVI, Mass at Lourdes, France, September 14th, 2008; AFP 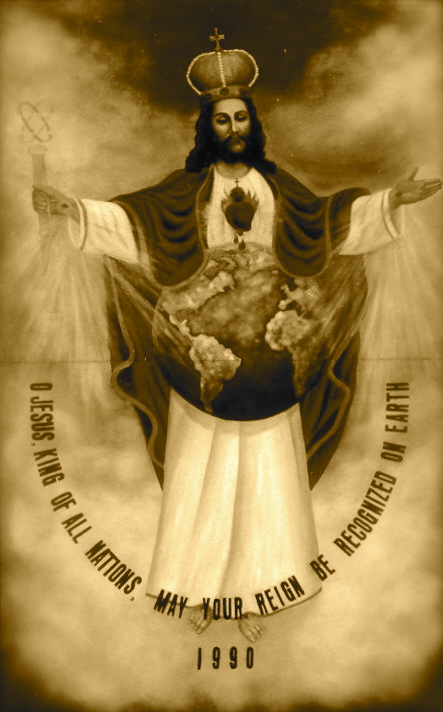 Jesus, King of All Nations