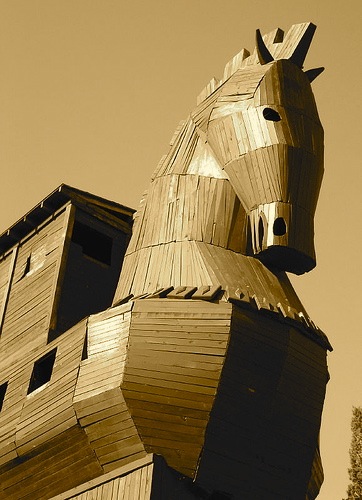 I HAVE felt a strong urge to watch the movie Troy for a number of months. So finally, we rented it.

The impenetrable city of Troy was destroyed when it permitted an offering to a false god to enter its gates: the "Trojan Horse." At night when everyone was asleep, soldiers, hidden within the wooden horse, emerged and began to slaughter and burn the city.

Then it clicked with me: That city is the Church.

We permitted the god of secularism to enter our gates shortly after Vatican II. And an offering to this god was accepted by some of our bishops and priests—that is, the offering of the "culture of death" hidden beneath the "Trojan Horse" of moral relativism and "following one’s conscience". Indeed, Catholics now embrace birth control, abortion, and divorce in the same numbers as the rest of the world. For just as everyone fell asleep in Troy while the enemy lay within, the priesthood fell asleep at the pulpit choosing to ignore and even dissent from the moral teaching of the Church.

And now, as the fires of purification burn in our news headlines, and the slaughter and prevention of life reduces most of the Western world’s birth rates to below replacement level, it is clear this "offering" the Church received in her intellectual pride was no gift at all. The exercise of our free-will has not led us into freedom, but destruction.

But not for all. Before sacrificing his life for his beloved city, Hector, The Prince of Troy, showed his wife and baby a secret escape route. As Troy burned, Hector’s wife with baby in arms, led a remnant of the city to safety.

So too, the Prince of the Church, Pope John Paul II (and Benedict in unity with him), has shown the way of safety for the Church—that is, to follow the Woman and her Baby—Mary, and Jesus present in the Eucharist–along the safe passage of truth. Through these "two pillars", the remnant Church will find safety, shelter, and refuge.

How narrow the gate and constricted the road that leads to life. And those who find it are few.(Matt 7:14)

Leave her, my people; let each one save himself from the burning wrath of the Lord. (Jer 51:6)