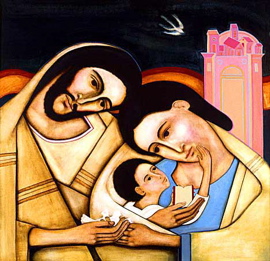 ACCORDING to Levitical law, a woman who has given birth to a child must bring to the temple:

a yearling lamb for a holocaust and a pigeon or a turtledove for a sin offering… If, however, she cannot afford a lamb, she may take two turtledoves…" (Lev 12:6, 8 )

In the Fourth Joyful Mystery, Mary and Joseph offer a pair of birds. In their poverty, it was all they could afford.

The authentic Christian is also called to give, not only of time, but also of resources—money, food, possessions—"until it hurts", Blessed Mother Teresa would say.

As a guideline, the Israelites would give a tithe or ten percent of the "first fruits" of their income to the "house of the Lord." In the New Testament, Paul does not mince words about supporting the Church and those who minister the Gospel. And Christ places pre-eminence on the poor.

I have never met anyone who practiced tithing ten percent of their income who lacked anything. Sometimes their "granaries" overflow the more they give away.

Give and gifts will be given to you, a good measure, packed together, shaken down, and overflowing, will be poured into your lap" (Lk 6:38)

The poverty of sacrifice is one in which we view our excess, less as play money, and more as "my brother’s" next meal. Some are called to sell everything and give it to the poor (Mat 19:21). But all of us are called to "renounce all our possessions"—our love for money and love of the things which it can buy—and to give, even, from what we do not have.

Already, we can feel our lack of faith in God’s providence.

Lastly, the poverty of sacrifice is a posture of spirit in which I am always ready to give of myself. I tell my children, "Carry money in your wallet, just in case you meet Jesus, disguised in the poor. Have money, not so much as to spend, as to give."

This kind of poverty has a face: it is generosity.

Bring the whole tithe into the storehouse, that there may be food in my house, and try me in this, says the Lord: Shall I not open for you the floodgates of heaven, to pour down blessing upon you without measure?  (Mal 3:10)

...this poor widow put in more than all the other contributors to the treasury. For they have all contributed from their surplus wealth, but she, from her poverty, has contributed all she had, her whole livelihood. (Mar 12:43-44)

Posted in HOME, THE FIVE POVERTIES.