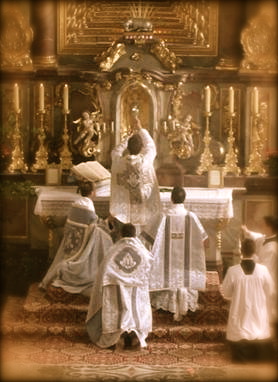 LIKE the dawning of the Sun, is the rebirth of the Latin Mass.

The first signs of morning are like a dim halo on the horizon which grows brighter and brighter until the horizon is engulfed in light. And then the Sun comes.

So too, this Latin Mass signals the dawning of a new era (see The Breaking of the Seals). At first, its effects will be barely noticed. But they will grow brighter and brighter until the horizon of humanity is engulfed in the Light of Christ.

I have not had the opportunity to participate in the Latin Rite myself; I write here only according to the inspirations which I feel compelled to write under spiritual direction. From a reader who recently attended her first Tridentine Mass:

I recently attended my first Latin Mass on the feast of our Blessed Mother’s birthday.  It was a special Mass that was taped by our diocese to be used to train priests.  I loved it!  I felt like I was experiencing "heavenly worship" for the first time!  I felt like I was receiving my first Holy Communion.  The prayers were so beautiful!  (We were given books with Latin on one side and English on the other to follow along.)  It seemed to me that in this Mass it was much easier to enter into DEEP prayer!  The chanting of the choir was incredible… At the Latin Mass, I felt like I was witnessing not only "heavenly worship" but also participating in universal prayer that tied me somehow to all the ages before us who prayed this Mass.  The prayers to prepare for Communion were so beautiful and deeply touched my soul as they brought me into greater self-examination.

Once again, the difficult words of Ezekiel ring out—words which are a merciful warning from Heaven:

Thus says the Lord GOD: Woe to the shepherds of Israel who have been pasturing themselves! Should not shepherds, rather, pasture sheep? …You did not strengthen the weak nor heal the sick nor bind up the injured. Thus says the Lord GOD: I swear I am coming against these shepherds. I will claim my sheep from them and put a stop to their shepherding my sheep so that they may no longer pasture themselves. For thus says the Lord GOD: I myself will look after and tend my sheep. As a shepherd tends his flock when he finds himself among his scattered sheep, so will I tend my sheep. I will rescue them from every place where they were scattered when it was cloudy and dark. (Ezekiel 34:2-3, 10-13)

Christ is purifying His Church. He will not abandon His flock. Let me say this: The post-conciliar Mass of Pope Paul VI is a valid rite. But the abuses which have followed are not, especially in the wake of the vernacular. The false theology that the "Mass is all about the people" is like a dead limb about to be pruned. The notion that the Mass is more a celebration than a Sacrifice is coming to an end. The idea that the Liturgy is a psycho-therapeutic gathering and not a worship of the Living God is going to burst like a bubble. The titillating verbage that "we are an ‘Easter people’ beyond such "repressive" ideas as repentance, contrition, and bodily reverence will soon be hollow. For Christ Himself is coming to feed His flock. And when He comes, every knee shall bow and every tongue confess that Jesus Christ—present in the Bread of Life, just as He said—is LORD.

Prepare! Make straight the pathways in your heart. I, your Shepherd, am coming.

Yes, there is coming a day when Catholic Churches will be packed to the rafters as souls come to see, touch, and taste their Shepherd, present in the Holy Sacrifice of the Mass. For I believe Jesus is going to manifest His true Presence to us before the culmination of the final confrontation between the Church and the anti-Church of this era (see The Eclipse of the Son.)

Then, in tears of both sorrow and joy, we will know exactly what happened.

They have seen and hated both me and my Father. You will be hated by all because of my name, but whoever endures to the end will be saved.(John 15:24, Matt 10:22)

We are now facing the final confrontation between the Church and the anti-Church, of the Gospel and the anti-Gospel.  —Cardinal Karol Wojtyla (JOHN PAUL II), reprinted November 9, 1978, issue of The Wall Street Journal from a 1976 speech to the American Bishops

It is time for priests, bishops, cardinals, husbands and dads to examine our hearts. For Christ did not come to condemn us but to bring us eternal life. Where we are lacking, we will find mercy. Where we have failed, we will find an abundance of grace. And what seems beyond repair should be handed over into the merciful hands of Jesus. For with God, all things are possible.