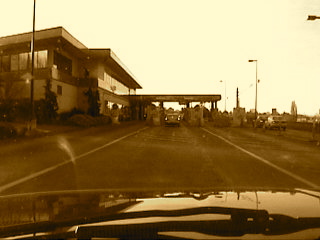 I HAD this feeling we were not going to be admitted to the United States.

Last Thursday, we pulled up to the Canadian/U.S. border crossing and presented our papers to enter the country for some ministry engagements. "Hello, I’m a missionary from Canada…" After asking a few questions, the border agent told me to pull over and ordered our family to stand outside the bus. As the near freezing wind gripped the children, mostly dressed in shorts and short sleeves, the customs agents searched the bus from end to end (looking for what, I don’t know). After re-boarding, I was asked to enter the customs building.

What should have been a simple process turned into two hours of grueling interrogations. The customs agent was not convinced that we were coming into the United States with missionary type work due to our expense arrangement with the churches. He questioned me, then my wife separately, then me again. I was fingerprinted, my photo taken, and finally refused entry. It was three in the morning by the time we headed back to the nearest Canadian town, our seven kids and a trailer full of sound equipment in tow.

The next morning, we phoned the churches where I was heading to speak and sing, and asked them to clarify in their letters to us the financial arrangement. After gathering all our faxes, we headed back to the border. This time, the questioning was even more cynical and a veiled threat was made toward me if I insisted upon debating the issue. "Go back to Canada," the supervising agent said.

I walked back to our tour bus, feeling numb inside. We had nine events lined up—some of them booked months ago. "It’s over," I said to my wife, Lea. "We’re going home."

I began the six hour drive home when Lea suddenly asked if I would pull over so she could make one last phone call. "I’m going to call the border, " she said. "What? They’ll lock me up this time!" I protested. But she insisted. When she got on the phone with the supervisor who last interrogated me, she said point blank: "It’s not about the money. We came here to do ministry, and a lot of people are counting on us. If we agree to waive our fees and have the churches fax you to that effect, will you reconsider?" The agent started to protest, but suddenly stopped, took a deep breath and said, "Okay, they can fax them over—but I’m not making any promises."

I gathered the kids together and took them into a truckstop diner for breakfast while we waited. As the kids munched away, I pondered what had transpired in the custom’s building… but my wife’s words were the ones which stuck in my head: "We have a ministry to do."

The Gospel does not come at a price. It has been paid for by my Son… and look at the price He paid.

I was filled with a sudden burst of shame mixed with joy. "Yes, You are right Lord. I should be willing to go wherever you send me for the sake of souls trusting entirely in Your providence. I should be going without cost!"

When I got back to the tour bus, I shared with Lea that I felt the Lord was saying that we need to change the way we’ve been doing ministry. Not that we have been raking in the money—God knows we have been near bankruptcy several times. And not that we have been asking for exorbitant fees. But we were asking for a price, and some churches and schools have been simply unable to pay it.

I knelt by our bed and wept, asking God’s forgiveness. "Lord, you have asked us to bring Your Gospel to the world. We will go wherever You ask without cost. We place our trust in Your goodness and Your providence. Forgive us for not trusting in You, Abba Father." After we prayed, both Lea and I were filled with a profound sense of freedom.

About an hour later, the cellphone rang. It was the border agent. "Okay, we’ll let you in." Three hours later, we arrived at our first booking—exactly at the minute it was to begin.

THE SPIRIT OF ST. FRANCIS

The next day, I went into the church to pray before the exposed Blessed Sacrament. I missed my prayer time the day before due to all the tension and chaos at the border. I decided to go back and meditate on the previous day’s readings, both from the Mass and from the Office of Readings. I was stunned as I began to read…

The previous feast day was St. Francis of Assisi’s. This is the saint who left behind the security of his wealth, and instead, relied entirely upon God’s providence while he preached the Gospel with his life.

The first Office Reading for that day was from St. Paul:

For his sake I have accepted the loss of all things and I consider them so much rubbish, that I may gain Christ and be found in him… (Phil 3:8-9)

While trying to absorb that word, I turned to the second reading which was a letter from St. Francis:

The Father willed that his blessed and glorious Son, whom he gave to us and who was born for us, should through his own blood offer himself as a sacrificial victim on the altar of the cross. This was not to be done for himself through whom all things were made, but for our sins. It was intended to leave us an example of how to follow in his footsteps.

Men lose all the material things they leave behind them in this world, but they carry with them the reward of their charity and the alms they give… We must not be wise and prudent according to the flesh. Rather we must be simple, humble and pure. —The Liturgy of the Hours, Vol IV, p. 1466.

By now, tears once again filled my eyes as I realized how lovingly the Lord was treating me, kind enough to set me straight—I who was trying to be "wise and prudent" but lacked faith and purity of heart. But He was not done speaking. I turned to the Mass readings for the previous day.

Today is holy to the Lord your God. Do not be sad, and do not weep… for rejoicing in the Lord must be your strength… Hush, for today is holy, and you must not be saddened. (Neh 8:1-12)

Yes, I felt this wonderful freedom in my soul, and I was rejoicing! But I was in silent awe at what I read next in the Gospel:

The harvest is abundant but the laborers are few, so ask the master of the harvest to send out laborers for his harvest. Go on your way; behold, I am sending you like lambs among wolves. Carry no money bag, no sack, no sandals… eat and drink what is offered to you, for the laborer deserves his payment. (Luke 10:1-12)

As many of you know, o
ne of the words which I have heard the Lord say, and which I have written here, is that the age of ministries is ending. That is, the old way of doing things, the worldly models on which we have based and operated our ministries, is coming to an end. It is fitting then, that it has begun with me.

I want to ask forgiveness to the Body of Christ for asking for a fee for the work I do in some of the places where I have gone, especially to those places that could not afford my ministry. Lea and I have agreed that we will go where we feel the Lord is sending us without cost. We will certainly welcome donations to support our work and to feed our little ones. But we do not want that to be a stumbling block to the preaching of the Gospel.

Pray for us, that we may be faithful as the Master sends us out into the harvest…

I will rather boast most gladly of my weaknesses, in order that the power of Christ may dwell with me. (2 Cor 12:9)

All you who are thirsty, come to the water! You who have no money, come, receive grain and eat; Come, without paying and without cost, drink wine and milk! (Isaiah 55:1)