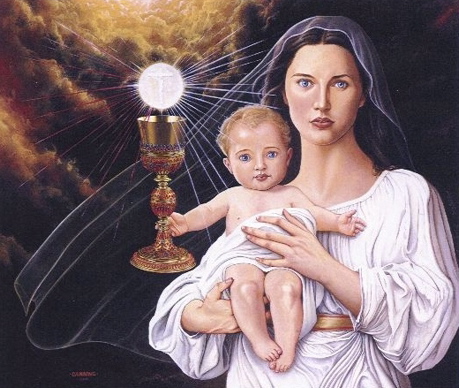 Mary, Mother of the Eucharist, by Tommy Canning

Then he led me to the gate which faces the east, and there I saw the glory of the God of Israel coming from the east. I heard a sound like the roaring of many waters, and the earth shone with his glory. (Ezekiel 43:1-2)

MARY is calling us to the Bastion, to a place of readiness and listening, away from the distractions of the world. She is preparing us for the Great Battle for souls.

Now, I hear her saying,

Look to the East!

The East is where the sun rises. It is where the dawn arrives, dispelling the darkness, and scattering the night of evil. East is also the direction where the priest faces during Mass, anticipating the return of Christ (I should note, it is the direction the priest faces in all of the rites of the Catholic Mass—except the Novus Ordo, though it’s possible in that rite.) One of the misinterpretations of Vatican II was to turn the priest toward the people for the entire Mass, an interruption of 2000 years of tradition. But in restoring the ordinary use of the Tridentine Mass (and therefore beginning the restoration of the Novus Ordo), Pope Benedict has literally begun to turn the whole Church back toward the East… toward the anticipation of the coming of Christ.

Where priest and people together face the same way, what we have is a cosmic orientation and also in interpretation of the Eucharist in terms of resurrection and trinitarian theology.  Hence it is also an interpretation in terms of parousia, a theology of hope, in which every Mass is an approach to the return of Christ. —POPE BENEDICT XVI (Cardinal Ratzinger), The Feast of Faith, San Francisco: Ignatius Press, 1986, pp. 140-41.)

As I have written elsewhere, the Era of Peace is going to coincide with the reign of the Sacred Heart of Jesus, that is, the Eucharist. In that day, no longer will it be just the Church who adores Jesus in the Blessed Sacrament, but all the nations. It is most significant then that the Holy Father is turning the Church toward the East at this time. It is a call now to seek Jesus who is among us in anticipation of His coming reign.

Everything which is not built on Rock is going to crumble. And that Rock is the Blessed Sacrament.

The Eucharist is “the source and summit of the Christian life.” The other sacraments, and indeed all ecclesiastical ministries and works of the apostolate, are bound up with the Eucharist and are oriented toward it. For in the blessed Eucharist is contained the whole spiritual good of the Church, namely Christ himself, our Pasch.—Catechism of the Catholic Church, n. 1324

Everything the Church needs for her spiritual health, sanctification, and growth is found in the Sacraments, which all find their root in the Eucharist.

We just don’t believe it.

So for the past 40 years, we have been wandering in the desert, from one idol to the next, searching for healing and answers everywhere but at the Source. Sure, we go to Mass… and then run to the therapist or the “inner healing” team for the healing! We turn to Dr. Phil and Oprah rather than to the Wonderful Counselor. We spend money on self-help seminars instead of turning to the Savior, present to us in His Body and Blood. We travel to other churches for an “experience” rather than sit at the feet of Him from whom all creation exists.

The reason is that this generation is impatient. We want a “Drive Thru” healing. We want quick and easy answers. When the Israelites became restless in the desert, they erected gods. We are no different. We want to see God’s power now, and when we don’t, we turn to other “idols”, even seemingly “spiritual” ones. But they are going to crumble now, for they are built upon sand.

RETURN TO THE REMEDIES

Sin is the root of most of today’s psychosis and mental disease. Repentance is the avenue to freedom. Jesus gave the remedy: Baptism and Confirmation which make us into a holy and immaculate new creation through the power of the Holy Spirit in whom we live, and move, and have our being. And if we sin, the way to restore that state is Confession.

Others hurt us, that is true. And so Jesus gave us another remedy related to Confession: Forgiveness.

Sin is like a poison-tipped arrow. Forgiveness is what draws out the poison. Still there is a wound, and Jesus gave us the remedy for that: the Eucharist. It is up to us to open our hearts wide to Him in trust and patience so that He can enter and do the surgery.

I believe the day is coming when all the Church will have is the Eucharist. We will be stripped down to nothing… nothing but Him.

THE AGE OF MINISTRIES IS ENDING

I saw in my heart an image of the sun rising at dawn. The stars in the sky seemed to vanish, but they really didn’t. They were still there, merely drowned out by the brilliance of the sun.

The Eucharist is the Sun, and the stars are the charisms of the Body.  The charisms light the way, but are always leading toward the Dawn. The days are coming and are already here when the charisms of the Holy Spirit will be purified and re-ordered toward the Eucharist.  This too is what I hear our Blessed Mother saying. The call to the Bastion is a call to lay down our gifts before our Queen to be purified and strengthened so that they can be used in this new phase of the Battle, according to her plan. And her plan is His plan: to call the world to conversion—to Himself in the Eucharist—before it is purified…

See, I am doing something new! Now it springs forth, do you not perceive it? In the desert I make a way, in the wasteland, rivers. (Isaiah 43:19)

THE RIDER UPON THE WHITE HORSE

In Revelation 5:6, the one who is worthy to break open the Seals of Judgment is Jesus, described by St. John as…

…a Lamb that seemed to have been slain.

It is Jesus, the Paschal Sacrifice—a Lamb that seemed to have been slain—that is, He was slain but was not conquered by death. It is He who is to lead the Great Battle upon the earth. I believe He is going to reveal Himself to us in a manifestation of His presence in or related to the Eucharist. It will be a warning… and the beginning of the end of this era.

Look to the East, says our Mother, for the Rider upon the White Horse is approaching.