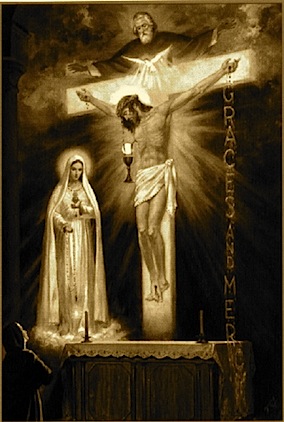 Painting of the "last vision" of Sr. Lucia

IN what has become known as the "last vision" of Fatima seer Sr. Lucia, while praying before the Blessed Sacrament, she saw a scene which carries many symbols for the period which began with the Virgin’s apparitions up to our present time, and the times to come:

Suddenly, the whole chapel was illuminated by a supernatural light, and above the altar appeared a Cross of light, reaching to the ceiling. In a brighter light on the upper part of the Cross, could be seen the face of a man and his body as far as the waist; upon his breast was a dove of light; nailed to the Cross was the body of another man. A little below the waist, I could see a chalice and a large Host suspended in the air, onto which drops of blood were falling from the Face of Jesus Crucified and from the wound in His side. These drops ran down onto the Host and fell into the chalice. Beneath the right arm of the Cross was Our Lady and in her hand was her Immaculate Heart. (It was Our Lady of Fatima, with her Immaculate Heart in her left hand, without sword or roses, but with a crown of thorns and flames.) Under the left arm of the Cross, large letters, as if of crystal clear water which ran down upon the altar, formed these words: "Grace and Mercy." —June 13th. 1929

First, Sr. Lucia sees a "Cross of light reaching to the ceiling." This signifies that God’s love is poured out on the world through the sacrifice of the Son on the Cross. It also proclaims that every Mass is a re-enactment of the sacrifice on Calvary. In addition, it may be a symbol of the Illumination which is going to come upon the whole earth, when we see our souls as the Father in Heaven sees them (accompanied, say some Catholic mystics, by an illuminated Cross in the sky.) This will be a gift from the Heavenly Father—a final act of mercy before the world enters her most painful purification. Hence, Sr. Lucia sees the Father who is Love over top of the Cross.

With the Illumination of consciences, there will also be an outpouring of the Holy Spirit to equip the Church for the "final confrontation" with the powers of darkness of this era and their minions who refuse the grace of the Illumination. This outpouring will increase until the culmination of this purification, when the Spirit will come like fire to renew the face of the earth. And thus, the Spirit is also pictured above the Cross.

PASSION OF THE CHURCH

But what of this Cross? I believe what Sr. Lucia saw was a prophetic image of the Church about to enter her own Passion, symbolized by the offering of the Sacrifice of the Mass in the chalice and Host. The Blood which fell came from "the Face of Christ." And we, the Church, are indeed the face of Christ to the world.

The Blessed Virgin stands beneath the right arm of the Cross. In traditional royalty, the King holds the Staff or Rod that represents his power in his right hand. It’s this staff that is used to execute judgment or mercy. But Mary has held back this judgment through the intercession of Her Immaculate Heart (see Times of the Trumpets — Part IV ).

The words "Grace and Mercy" are to indicate the two distinct periods we are in, which began at different times, occur simultaneously, but end differently.

The "time of grace" began to flow like water with Our Lady’s apparitions at Rue de Bac to St. Catherine Labouré. Our Lady appeared standing on a globe to indicate the global significance of her visitations. She appeared with her hands covered in rings and jewels from which light shone toward the globe. She tells St. Catherine that "These rays symbolize the graces I shed upon those who ask for them. The jewels which give no rays symbolize the graces that are not given because they are not asked for." She asks St. Catherine to have a medal struck which illustrates her as the "mediatrix" of all graces. God in His mercy has given the Church two centuries to receive these graces to prepare, in particular, for the time of mercy.

The "time of mercy" began when an angel with a sword, who appeared in a vision to the children of Fatima, was about to strike the earth with a chastisement. Our Blessed Mother suddenly appeared again with light emanating from her. The angel’s punishment was postponed as he cried out to the earth, "Penance, penance, penance!" We know this began what Jesus called the "time of mercy" when He spoke to St. Faustina sometime later.

What is the difference? This time of grace is a period in which, through our Mother’s intercession, she is drawing great graces upon the Church to prepare her for the final confrontation with the powers of darkness in this present era. The Woman-Mary is laboring to give birth to the "full number of Gentiles" who will form the heel which will crush Satan. This will prepare the way for the Woman-Church to give birth to the "whole Christ," both Jew and Gentile, in the Era of Peace. This present time of grace, which is drawing to a close, is the period in which the oil of faith is being poured into those hearts who are "open wide to Jesus Christ." Bu
t there will come a time when this period of grace will end, and those who have refused it will be left without enough oil for their lamps—just the false light of a delusion that God will permit to deceive those who are unrepentant (2 Thess 2:11).

The time of mercy will continue through the chastisements which will follow (even if few accept His mercy) until God purifies the earth of all wickedness, thus beginning a "period of peace."

Those who refuse His mercy must pass through the door of His justice.