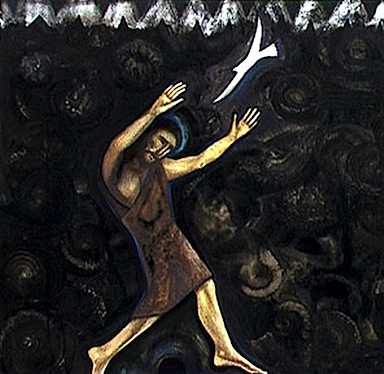 JUST as Jesus was immediately preceded by the prophet John the Baptist, who was alive at the same time as Christ, so too the time of Antichrist—in mimicry of Christ—will be preceded by forerunners who will likewise… “Prepare the way of the [Antichrist and] make straight his paths. Every valley shall be filled and every mountain and hill shall be made low. The winding roads shall be made straight, and the rough ways made smooth…” (Luke 3:4-6)

And they are here.

The Antichrist’s paths are being “made straight” by forerunners who are removing obstacles to his “culture of death.” They will speak words that sound reasonable, sound tolerant and good. But they will be more of a twist of truth as opposed to its opposite. The valleys they fill and the mountains they make low are the differences between man and woman, mankind and animal kind, between one religion or another: everything is to be made uniform. The winding roads of human suffering are to be straightened, made wide and easy by offering “solutions” to end all suffering. And the rough ways of dying to sin and self will be razed and paved over with a shiny and guiltless surface where sin does not exist and self-fulfillment is the ultimate destination.

At the same time, God has raised up His forerunners. Servants who preach repentance and forgiveness to remove the obstacle of sin, to open the way for the “Gospel of life.” They fill up the valleys “of the shadow of death” by unmasking the lie that humanity is a only a product of evolution, a “footprint” upon the environment, a mere organism rather than a son or daughter of the Most High. They make low those mountains of pride by preaching the truth which sets souls free and provides the guideposts to eternal life. They straighten the winding roads by showing the path to Calvary where human suffering takes on meaning and value for one’s own sanctification and that of others. And they smooth the rough ways of the Old Testament requirement of fulfilling the law, by a new commandment: to love one’s neighbour as oneself.

Herein lies the difference: one path is the Gospel of Life, the other, the “gospel” of death. The paths are being clearly presented:

In Bolivia, new enemies have appeared, not only now in the right-wing media but also in groups from the Catholic Church, the leaders of the Catholic Church who are the enemies of peaceful transformation… I want to say to you what we hear shouted all the time: ‘Another world is possible,’ I want to tell you another faith, another religion, another church is also possible, brothers and sisters. —President Evo Morales of Bolivia at the World Social Forum, Catholic News Agency, February 2nd, 2009

The time will come, perhaps sooner than many realize, when we must choose whom we will serve, to whom we will pledge our devotion: God or mammon, Christ, or perhaps even Antichrist.