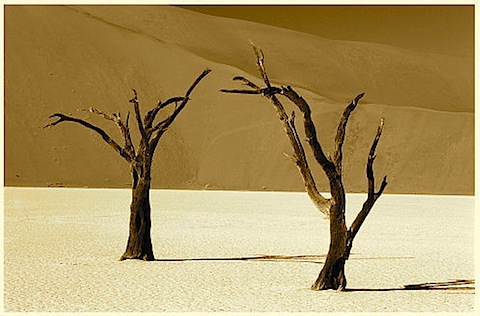 FOR six months now, the Lord has remained mostly "silent" in my life. It has been a journey through an interior desert where great sand storms swirl and the nights are cold. Many of you understand what I mean. For the Good Shepherd is leading us with His rod and staff through the valley of death, the valley of stripping, the Valley of Achor.

THE DESERT OF TROUBLE

The Hebrew word Achor means "trouble", and it is found in this passage in Hosea, which contains, in a few words, the entire writings of this website. Speaking of His Bride, Israel, God says:

Therefore, I will hedge in her way with thorns and erect a wall against her, so that she cannot find her paths. If she runs after her lovers, she shall not overtake them; if she looks for them she shall not find them. Then she shall say, "I will go back to my first husband, for it was better with me then than now." So I will allure her; I will lead her into the desert and speak to her heart. From there I will give her the vineyards she had, and the valley of Achor as a door of hope. (Hosea 2:8,9, 16, 17; NAB)

Pope John Paul spoke of a new springtime in the Church that we would reach by "crossing the threshold of hope." But before that springtime, there will be a winter. Before we cross that threshold to embrace hope, we must pass through the desert:

Before Christ’s second coming the Church must pass through a final trial that will shake the faith of many believers. The persecution that accompanies her pilgrimage on earth will unveil the "mystery of iniquity" in the form of a religious deception offering men an apparent solution to their problems at the price of apostasy from the truth. The supreme religious deception is that of the Antichrist, a pseudo-messianism by which man glorifies himself in place of God and of his Messiah come in the flesh. —Catechism of the Catholic Church, n. 675

This desert has many dimensions. The one which I believe many are experiencing now is an interior desert (the exterior desert is coming). God has begun to hedge in the way of His Bride with thorns; He has erected a wall against us such that we cannot find our paths. That is to say, the old ways of operating in the Church for many centuries are coming to an end. I hear again the word I received a while ago:

The age of ministries is ending.

That is, the paths we have taken before, the old methods and means which we have relied upon, the modes of operation, administration, and delegation are coming to an end. The Bride of Christ will soon be walking entirely by faith and no longer by sight, no longer by security according to the world’s concepts. Jesus is leading us into the Desert of Stripping where the interior and exterior crutches, assumptions, idols and securities we have relied upon come tumbling down. That is, we are being reduced to a grain of wheat, small, little, nothing. We are being drawn into a barren place where we will stand naked before the Truth. Our nothingness will become the source of derision and mockery of a world cast in shadow, and for a time, it will seem that even God has abandoned us.

But it is in this place, this place of dryness, of weakness, of utter dependency upon God that a droplet from the ocean of Divine Mercy will fall upon the grain of wheat which has fallen to the ground and died to itself, and the desert will begin to blossom. The "door of hope" will open and the Church will cross the threshold of hope to embrace hope in an era which can only be described as the Vindication of Wisdom, the triumph of Justice, the victory of Peace.

But we must pass through the Desert of Trouble first.

While praying before the Blessed Sacrament, the words from Isaiah 30 became for me the "song of the desert":

By waiting and by calm you shall be saved, in quiet and in trust your strength lies. (Isaiah 30:15)

While the world "as we know it" continues to cave in at a breakneck pace, the need to evangelize would seem imperative. And it is. But how we evangelize is crucial. The Church does not need more programs. It needs saints.

Can you make yourself holy? No, and I can’t either. But the desert can; that place of trials, persecutions, and all manner of difficulties. Said Pope Benedict:

Christ did not promise an easy life. Those who desire comforts have dialed the wrong number. Rather, he shows us the way to great things, the good, toward an authentic life. —POPE BENEDICT XVI, Address to German Pilgrims, April 25th, 2005.

People listen more willingly to witnesses than to teachers, and when people do listen to teachers, it is because they are witnesses. It is therefore primarily by the Church’s conduct, by living witness of fidelity to the Lord Jesus, that the Church will evangelize the world. This century thirsts for authenticity… Do you preach what you live? The world expects from us simplicity of life, the spirit of prayer, obedience, humility, detachment and self-sacrifice. —POPE PAUL VI, Evangelization in the Modern World, n. 41, 76

So we need to embrace this desert as a gift, for from it will blossom in your soul the flower of holiness. This flower will not only adorn your life with virtue and joy, but it will spread its fragrance throughout an impoverished world. I heard Jesus say in my prayer:

Accept whatever comes to you, exteriorly and interiorly, with love, patience, and obedience. Do not question it, but accept it as the cloth accepts the sharp point of the needle. It does not know how this new thread will look in the end, but by remaining still, in calm and quiet, the soul will slowly be made into a divine tapestry.

Know, brothers and sisters, that I am with you in this desert through my prayer
s, through these writings, and through my webcast in so far as the Lord permits. Several of you have written wondering why I have "disappeared" as of late. The answer is twofold; one is simply that I have not been given many "words" to write. Perhaps this is so you can actually catch up and read what has already been spoken! As well, I have spent the summer relocating my family and ministry. This has demanded 99 percent of my time.

But as I wrote a short while ago, it seems that my mission is "just beginning." I cannot explain this fully at this time (nor do I understand it fully), but as the work of resettling comes to an end, everything else is being put into place. My book has been shipped and will be available shortly. This book will be an important tool, I believe, in waking up the Church since it is based on the authority of the Magisterium. Also, the webcast studio is nearly complete. There are other works as well, and I have touched upon them here. I will write more when the time is right.

Lastly, I want to thank you again for all your prayers and for the donations that came in which have allowed me to finish the studio and retain the equipment we need to move forward. You are such an incredible little community, my readership. You are all so close to me though I have not seen most of your faces.

Know this: we are loved. Jesus loves us and is accompanying us closely in this desert, as a shepherd remains close to his flock. Don’t be afraid or troubled by this "trial by fire", but persevere, remain faithful, and when you fail, turn immediately to the ocean of His Divine Mercy and know that absolutely nothing can separate you from His love. Do not run away, for at this very moment a droplet of Divine Mercy is descending. You need only open your heart in trust, in waiting and in calm, and grace for the present moment will renew your strength for another day, then the flower of holiness (which remains mostly hidden to you) will soon begin to blossom as the Master of Seasons calls forth His lambs to renew the face of the earth.

I leave you with a beautiful insight from St. Eucherius:

Might we not reasonably suggest that the desert is a limitless temple for our God? Because undoubtedly, someone living in silence is going to take pleasure in solitary places. It is there that he often makes himself known to his saints; it is under cover of the solitude that he condescends to encounter people.

It was in the desert that Moses saw God, his face bathed in light… It was there that he was permitted to converse familiarly with the Lord; he exchanged speech with him; he conversed with the Lord of heaven just as people habitually converse with their fellows. It was there he received the staff that had power to work wonders and, after entering the desert as a shepherd of sheep, he left the desert as a shepherd of peoples (Ex 3; 33,11; 34).

Similarly, when the people of God were to be set free from Egypt and delivered from their earthly works, did they not make their way into a place apart and take refuge in the solitudes? Yes indeed, it was in the desert that it was to draw near to this God who snatched them out of their bondage… And the Lord made himself the leader of his people, guiding them across the desert. Day and night along the way he set a pillar, a burning flame or a shining cloud, as a sign from heaven… Thus the children of Israel, while living in the solitudes of the desert, attained the vision of God’s throne and heard his voice…

Must I add that they did not reach the land they desired until they had sojourned in the desert? That the people might one day enter into possession of a land where milk and honey flowed, they had first to pass through dry and uncultivated places. It is always by means of camps in the desert that we make our way towards our true homeland. Let those who wish to see "the bounty of the Lord in the land of the living" (Ps 27[26]: 13) dwell in an uninhabitable land. Let those who would become citizens of heaven become guests of the desert. —Saint Eucherius (c. 450 A.D.), Bishop of Lyons