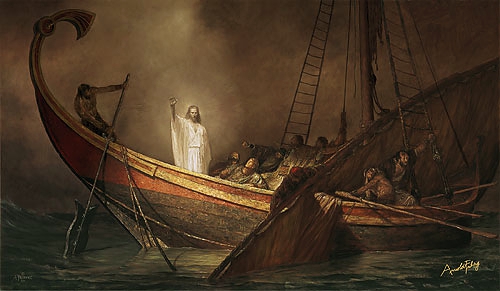 Peace Be Still, by Arnold Friberg

FROM time to time, I receive letters like these:

Please pray for me. I am so weak and my sins of the flesh, especially alcohol, strangle me.

You could simply replace alcohol with “pornography”, “lust”, “anger” or a number of other things. The fact is that many Christians today feel swamped by the desires of the flesh, and helpless to change.

So the story of Christ’s calming the wind and sea in today’s Gospel is most appropriate (see today’s liturgical readings here). St. Mark tells us:

A violent squall came up and waves were breaking over the boat, so that it was already filling up. Jesus was in the stern, asleep on a cushion. They woke him and said to him, “Teacher, do you not care that we are perishing?” He woke up, rebuked the wind, and said to the sea, “Quiet! Be still!” The wind ceased and there was great calm.

The winds are like our inordinate appetites that whip up the waves of our flesh and threaten to sink us into serious sin. But Jesus, after calming the storm, rebukes the disciples in this way:

Why are you terrified? Do you not yet have faith?

There are two things of importance to note here. The first is that Jesus asks them why they do not “yet” have faith. Now, they could have responded: “But Jesus, we did get into the boat with you, even though we saw storm clouds on the horizon. We are following you, even when many are not. And we did wake you.” But perhaps Our Lord would reply:

My child, you have remained in the boat, but with your eyes fixed on the winds of your appetites rather than Me. You indeed desire the consolation of My presence, but you so quickly forget My commandments. And you do wake Me, but long after temptations have crushed you instead of before. When you learn to rest beside me in the bow of your life, only then will your faith be authentic, and your love genuine. 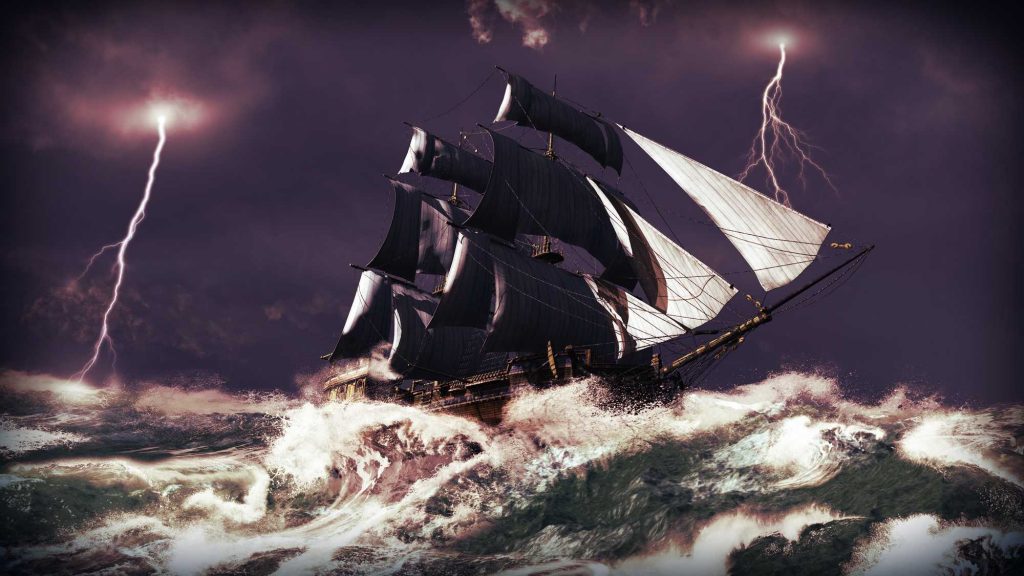 That’s a strong rebuke and a hard word to hear! But it’s pretty much how Jesus answered me when I complained to Him that, even though I pray every day, say the Rosary, go to Mass, weekly Confession, and whatever else… that I still fall time and again into the same sins. The truth is that I have been blind, or rather, blinded by the appetites of the flesh. Thinking I was following Christ in the bow, I have really been living in the stern of my own will.

St. John of the Cross teaches that the appetites of our flesh can blind reason, darken the intellect, and weaken the memory. Indeed, the disciples, though they had just witnessed Jesus casting out demons, raising paralytics, and curing a host of diseases, had just as quickly forgotten His power and lost their senses as soon as they became transfixed on the winds and waves. So too, John of the Cross teaches that we must renounce those appetites that so command our love and devotion.

As the tilling of soil is necessary for its fruitfulness—untilled soil produces only weeds—mortification of the appetites is necessary for one’s spiritual fruitfulness. I venture to say that without this mortification, all that is done for the sake of advancement in perfection and in knowledge of God and of oneself is no more profitable than seed sown on uncultivated ground.—The Ascent of Mount Carmel, Book One, Chapter , n. 4; The Collected Works of St. John of the Cross, p. 123; translated by Kieran Kavanaugh and Otilio Redriguez

Just as the disciples were blind to the omnipotent Lord in their midst, so it is with those Christians who, despite the exercise of many devotions or even extraordinary penances, do not diligently strive to deny their appetites.

For this is a characteristic of those who are blinded by their appetites; when they are in the midst of the truth and of what is suitable for them, they no more see it than if they were in the dark. —St. John of the Cross, Ibid.  n. 7

In other words, we must go to the bow of the ship, so to speak, and…

Take my yoke upon you, and learn from me; for I am gentle and lowly in heart, and you will find rest for your souls. For my yoke is easy, and my burden is light. (Matt 11:29-30)

The yoke is Christ’s gospel, summed up in the words to repent and to love God and neighbour. To repent is to reject the love of every attachment or creature; to love God is to seek Him and His glory in everything; and to love neighbour is to serve them as Christ loved and served us. It is at once a yoke because our nature finds it difficult; but it is also “light” because it is easy for grace to achieve it in us.”Charity, or the love of God”, says Venerable Louis of Granada, “renders the law sweet and delightful.” [1]The Sinner’s Guide, (Tan Books and Publishers) pp. 222 The point is this: if you feel that you cannot master the temptations of the flesh, then do not be surprised to hear Christ say to you also, “Do you not yet have faith?” For didn’t Our Lord die precisely to not only take away your sins, but to conquer their power over you?

We know that our old self was crucified with him so that the sinful body might be destroyed, and we might no longer be enslaved to sin. (Romans 6:6)

Now, what is saving from sin, if not obtaining the pardon of past faults and the grace to avoid others in the future? What was the end of Our Saviour’s coming, if not to help you in the work of your 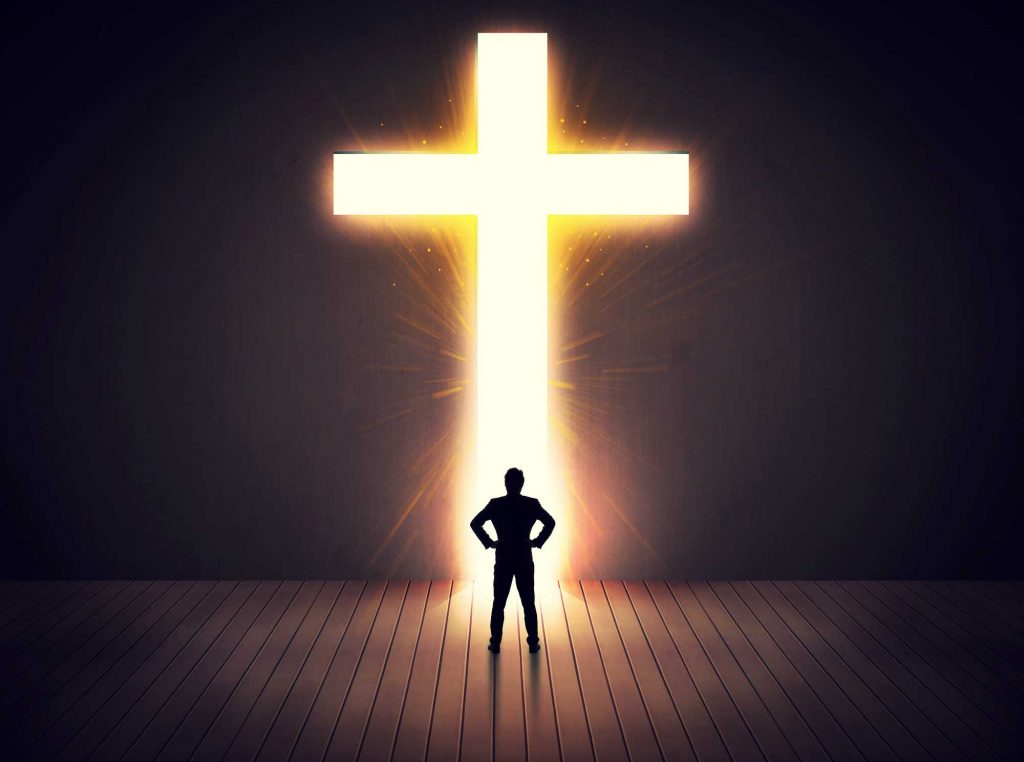 salvation? Did He not die on the cross to destroy sin? Did He not rise from the dead to enable you to rise to a life of grace? Why did He shed His Blood, if not to heal the wounds of your soul? Why did He institute the sacraments, if not to strengthen you against sin? Did not His coming render the way to Heaven smooth and straight…? Why did He send the Holy Spirit, if not to change you from flesh into spirit? Why did He send Him under the form of fire but to enlighten you, to inflame you, and to transform you into Himself, that thus your soul might be fitted for His own divine kingdom?… Do you fear that the promise will not be fulfilled, or that with the assistance of God’s grace you will not be able to keep His law? Your doubts are blasphemous; for, in the first instance, you question the truth of God’s words, and in the second, you respect Him as unable to fulfill what He promises, since you think Him capable of offering you succor insufficient for your needs. —Venerable Louis of Granada, The Sinner’s Guide, (Tan Books and Publishers) pp. 218-220

Oh, what a blessed reminder!

So two things are necessary. One, is to renounce those appetites that readily want to swell into a wave of sin. The second, is to have faith in God and His grace and power to do what He has promised in you. And God will do it when you obey Him, when you take up The Cross of Loving others instead of your own flesh. And how quickly God can do this when you earnestly undertake to allow no other gods before Him. St. Paul summarizes all of the above in this way:

For you were called for freedom, brothers. But do not use this freedom as an opportunity for the flesh; rather, serve one another through love. For the whole law is fulfilled in one statement, namely, “You shall love your neighbor as yourself.” But if you go on biting and devouring one another, beware that you are not consumed by one another. I say, then: live by the Spirit and you will certainly not gratify the desire of the flesh. (Gal 5:13-16)

Do you feel this is impossible? St. Cyprian once doubted this was possible himself, seeing how attached he was to the desires of his flesh.

I urged that it was impossible to uproot vices implanted in us by our corrupt nature and confirmed by habits of years…  —The Sinner’s Guide, (Tan Books and Publishers) pp. 228

St. Augustine felt much the same. 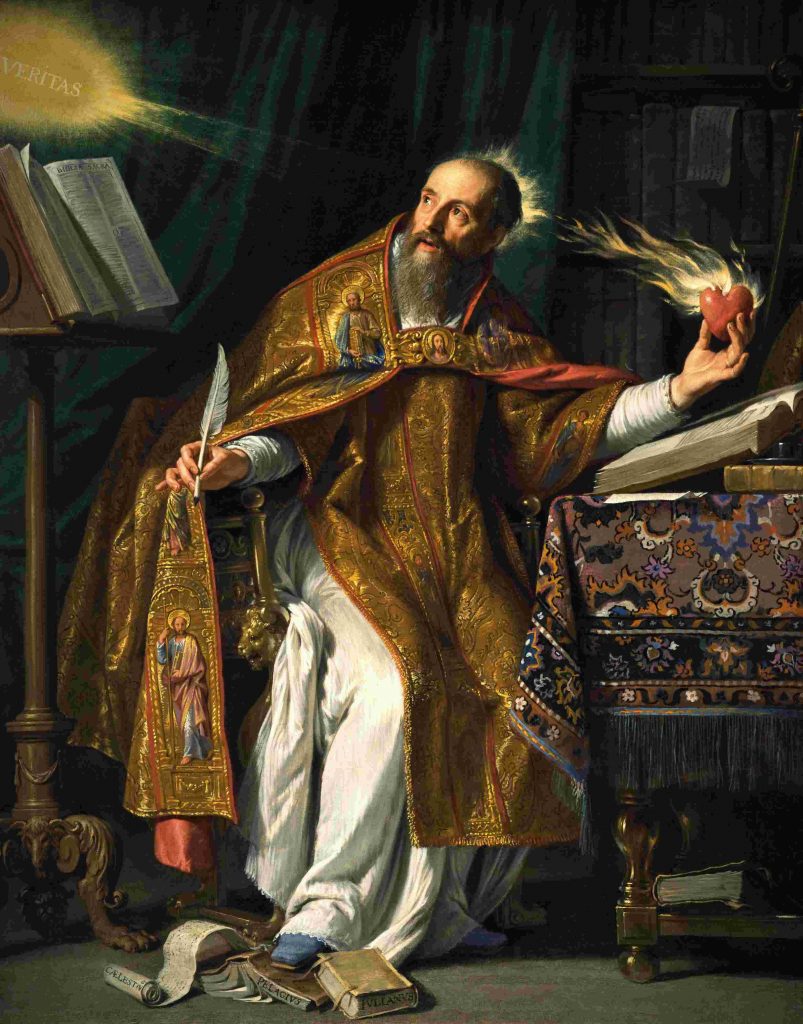 …when he began to think seriously of leaving the world, a thousand difficulties presented themselves to his mind. On one side appeared the past pleasures of his life, saying, “Will you part from us forever? Shall we no longer be your companions?” —Ibid. p. 229

On the other side, Augustine marvelled at those living in that true Christian freedom, thus crying out:

Was it not God who enabled them to do what they did? While you continue to rely upon yourself you must necessarily fall. Cast yourself without fear upon God; He will not abandon you. —Ibid. p. 229

In the renunciation of that storm of desires that sought to sink them both, Cyprian and Augustine attained a new found freedom and joy that exposed the utter illusion and empty promises of their old passions. Their minds, now unblinded by their appetites, began to be filled no longer with darkness, but the light of Christ.

This too has become my story, and I am overjoyed to proclaim that Jesus Christ is Lord of every storm.

If you would like to support our family’s needs,
simply click the button below.
Bless you and thank you!