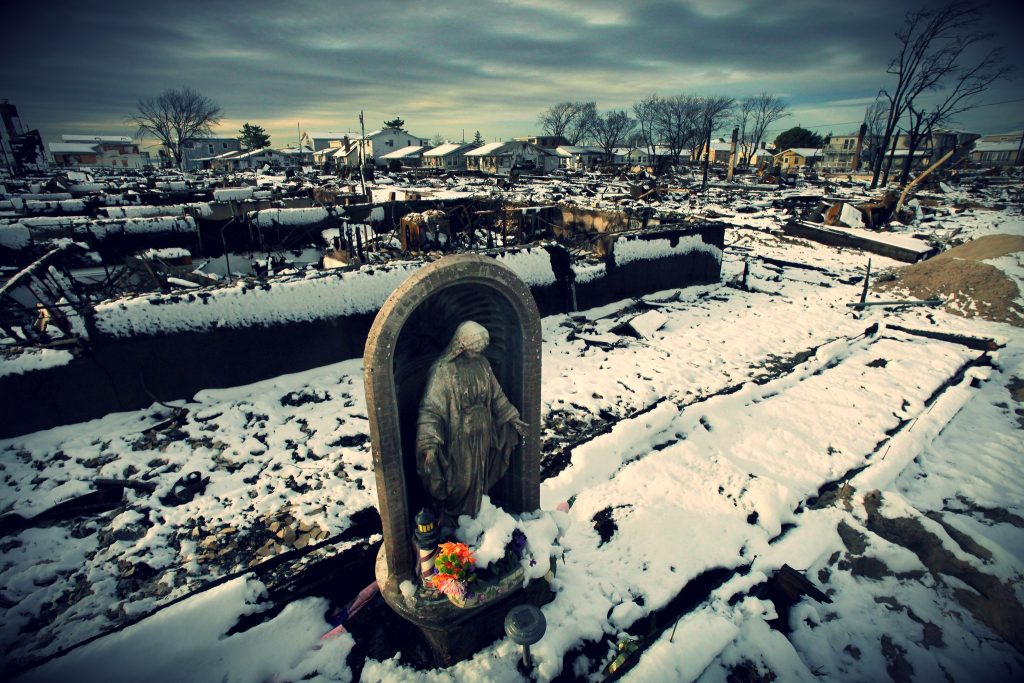 “NOTHING good ever happens after midnight,” my wife says. After nearly 27 years of marriage, this maxim has proven itself true: don’t try to sort out your difficulties when you should be sleeping.

One night, we ignored our own advice, and what seemed a passing comment turned into a bitter argument. As we’ve seen the devil try to do before, suddenly our weaknesses were blown out of proportion, our differences became gulfs, and our words became loaded weapons. Mad and sulking, I slept in the basement.

By morning, I awoke to the terrible realization that things had gone too far. That Satan had been given a stronghold through the lies and distortions that came out the evening before, and that he was planning maximum damage. We hardly spoke that day as an unbearable cold front moved in.

The next morning after another night of tossing and turning, I started to pray the Rosary and, with my mind and thoughts scattered and deeply oppressed, I managed to whisper a prayer: “Blessed Mother, please come and crush the head of the enemy.” Moments later, I heard the distinct sound of a suitcase being zipped, and suddenly realized that my bride was leaving! At that moment, I heard a voice somewhere in my broken heart say, “Go into her room — NOW!”

“Where are you going?” I asked her. “I need some time away,” she said, her eyes sad and tired. I sat down beside her, and over the course of the next two hours, we talked, listened, and waded through what seemed a dense and difficult jungle of lies that we had both believed. Twice I stood up and walked out, frustrated and exhausted… but something kept urging me to go back until, finally, I broke down and wept in her lap, begging her forgiveness for my insensitivity.

As we cried together, suddenly, a “word of knowledge” (cf. 1 Cor 12:8) came to me that we needed to “bind” the evil principalities that were coming against us.

For our struggle is not with flesh and blood but with the principalities, with the powers, with the world rulers of this present darkness, with the evil spirits in the heavens. (Ephesians 6:12)

Not that Lea and I see a demon behind every door or that every problem is a “spiritual attack.” But we knew, beyond a doubt, that we were in a serious confrontation. So we began to name whatever spirits came to mind: “Anger, Lies, Malcontent, Bitterness, Mistrust…” were mentioned, about seven in all. And with that, praying in agreement together, we bound the spirits and commanded them to depart.

In the weeks that followed, the sense of freedom and light that filled our marriage and home was 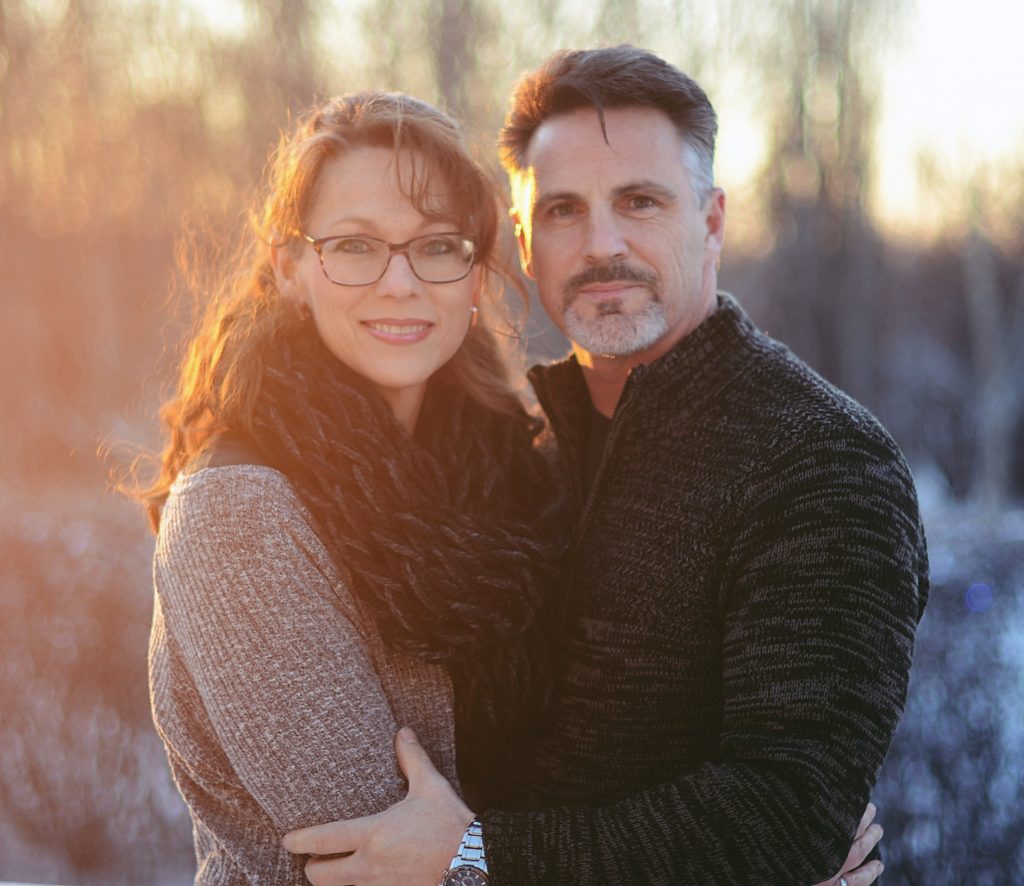 extraordinary. We also realized that this was not a matter of only spiritual warfare, but also the need for repentance and conversion—repentance for the ways we had failed to love one another as we should have; and conversion by changing the things that needed to change—from the way we communicated, acknowledging one another’s love language, trusting one another’s love, and above all, closing the door on those personal things in our lives, from inordinate appetites to a lack of discipline that could act as “open doors” to the enemy’s influence.

The name of Jesus is powerful. Through it, we believers have been given the authority to bind and rebuke spirits in our personal lives: as fathers, over our homes and children; as priests, over our parishes and parishioners; and as bishops, over our dioceses and the malicious enemy wherever he has taken possession of a soul.

But how Jesus chooses to bind and deliver the oppressed from evil spirits is another thing. Exorcists tell us that more people are delivered from evil spirits in the Sacrament of Reconciliation than at any other time. There, through His representative the priest in persona Christi and through a sincerely repentant heart, Jesus Himself rebukes the oppressor. At other times, Jesus acts through the invocation of His Name:

These signs will accompany those who believe: in my name they will drive out demons… (Mark 16:17)

So powerful is the name of Jesus, that simple faith in it is often enough:

“Master, we saw someone casting out demons in your name and we tried to prevent him because he does not follow in our company.” Jesus said to him, “Do not prevent him, for whoever is not against you is for you.” (Luke 9:49-50) 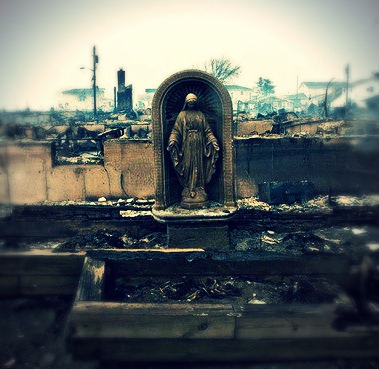 Last, the experience of the Church in dealing with evil tells us that the Virgin Mary is a torment to the Evil One.

Where the Madonna is at home the devil does not enter; where there is the Mother, disturbance does not prevail, fear does not win. —POPE FRANCIS, Homily at the Basilica of St. Mary Major, January 28th, 2018, Catholic News Agency; crux.com

In my experience—so far I have performed 2,300 rites of exorcism—I can say that the invocation of the Most Holy Virgin Mary often provokes significant reactions in the person being exorcized… —Exorcist, Fr. Sante Babolin, Catholic News Agency, April 28th, 2017

In the Catholic Church’s Rite of Exorcism, it says:

Most cunning serpent, you shall no more dare to deceive the human race, persecute the Church, torment God’s elect and sift them as wheat… The sacred Sign of the Cross commands you, as does also the power of the mysteries of the Christian Faith… The glorious Mother of God, the Virgin Mary, commands you; she who by her humility and from the first moment of her Immaculate Conception, crushed your proud head. —Ibid.

This invocation hearkens the Sacred Scriptures themselves which are book-ended, so to speak, by this battle between the “woman” and Satan—that “cunning serpent” or “dragon”.

I will put enmities between thee and the woman, and thy seed and her seed: she shall crush thy head, and thou shalt lie in wait for her heel… Then the dragon became angry with the woman and went off to wage war against the rest of her offspring, those who keep God’s commandments and bear witness to Jesus. (Gen 3:16, Douay-Reims; Revelation 12:17)

But it is the woman who crushes, by the heel of her Son or His mystical body, of which she is a preeminent part.[1]“…this version [in the Latin] does not agree with the Hebrew text, in which it is not the woman but her offspring, her descendant, who will bruise the serpent’s head. This text then does not attribute the victory over Satan to Mary but to her Son. Nevertheless, since the biblical concept establishes a profound solidarity between the parent and the offspring, the depiction of the Immaculata crushing the serpent, not by her own power but through the grace of her Son, is consistent with the original meaning of the passage.” —POPE JOHN PAUL II, “Mary’s Emnity toward Satan was Absolute”; General Audience, May 29th, 1996; ewtn.com  As one 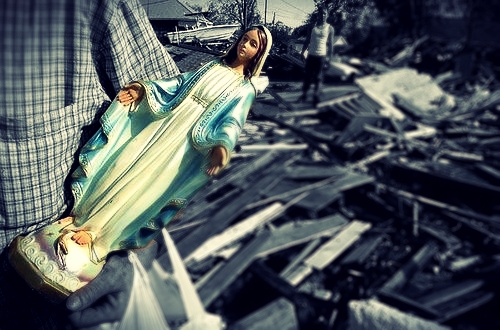 demon testified under obedience to an exorcist:

Every Hail Mary is like a blow on my head. If Christians knew how powerful the Rosary was, it would be my end. —told by an exorcist to the late Fr. Gabriel Amorth, Chief Exorcist of Rome, Echo of Mary, Queen of Peace, March-April edition, 2003

There is another “word of knowledge” that I shared with my readers nearly four years ago: that God has permitted, through man’s willful disobedience, to allow hell to be unleashed (cf. Hell Unleashed). The point of that writing was to warn Christians that they need to close the spiritual cracks and gaps in their life, those places of compromise where we play with sin or two-step with the devil. God is simply not tolerating this any longer as we have now entered a generalized time of sifting between the weeds and the wheat. We have to decide whether we are going to serve God or the spirit of this world.

No one can serve two masters; for either he will hate the one and love the other, or he will be devoted to the one and despise the other. You cannot serve God and mammon. (Matthew 6:24)

Hence, repentance and conversion are non-negotiables. But it is also a battle, and here too, our Blessed Mother cannot be considered an after-thought. In the words of the Vicar of Christ, who reminds the faithful that the devil “is a person”:

Devotion to Mary is not spiritual etiquette; it is a requirement of the Christian life… [cf. John 19:27] She intercedes, aware that as a mother she can, indeed, must, make present to the Son the needs of men, especially the weakest and most disadvantaged. —POPE FRANCIS, Feast of Mary, Mother of God; January 1, 2018; Catholic News Agency

“Who of us does not need this, who of us is not sometimes upset or restless? How often the heart is a 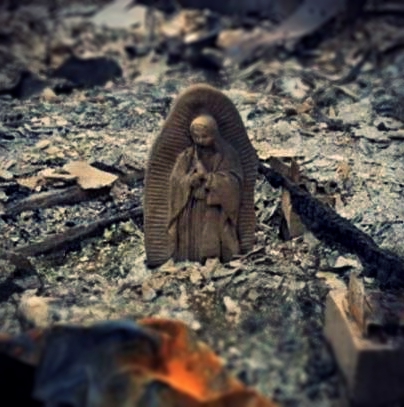 stormy sea, where the waves of problems overlap, and the winds of worry do not cease to blow! Mary is the sure ark in the midst of the flood…” it is “a great danger to faith, to live without a mother, without protection, letting ourselves be carried away by life as leaves by the wind… Her coat is always open to welcome us and gather us. The Mother guards faith, protects relationships, saves in bad weather and preserves from evil… Let’s make the Mother the guest of our daily life, the constant presence in our home, our safe haven. Let’s entrust (ourselves) to her every day. Let’s invoke her in every turbulence. And let’s not forget to come back to her to thank her.”—POPE FRANCIS, Homily at the Basilica of St. Mary Major, January 28th, 2018, Catholic News Agency; crux.com

Our Lady of the Storm, pray for us.

Our Lady of Light

Lea and I thank you for supporting
this full-time ministry.
Bless you.