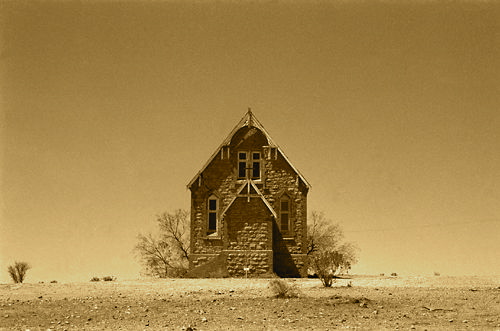 SEVERAL people have felt compelled to send me their dreams or visions. I share one here, because when I heard it, I felt it was not just for me. A woman relayed the following to me after Mass Sunday morning…

She was sitting on her porch the other day, and the Lord allowed her to experience His sorrow for the world. She literally saw people walking up her porch in this vision… a child starving, holding out his hand for food… a woman, broken and battered… It was powerful, moving, heartbreaking.

For some reason, it made her recall a dream she’d had some time ago. When she thought of it, my name popped into her mind, and she felt she had to tell me. It went something like this:

In my dream, we were running from people. It seemed they wanted to inject us with a "microchip". [The sheer terror I felt in the dream was so real, I could feel my breath short and my heart palpitating.]

We ran into a barn. But then the people began to break down the doors, so we ran out of the barn….

…Everything around us was completely desolate like a desert. As we walked, we saw in the distance what looked like a small Spanish hut. When we came closer, we could see it was a church.

I suddenly saw Jesus. He came up to me and gave me a scroll, and said, "It contains a message for you to give. When the time is right, I will reveal the contents to you as you need to know it."  Then He gave me a hug. [I physically felt His embrace in my body during the dream]. Then, suddenly, He was gone. I went inside the church, and there I saw Jesus standing amongst the others saying, "Be not afraid."

Then I woke up.

Often when people tell me dreams, an interpretation comes immediately. I will offer this here as a possible explanation (which seemed to agree with her as well).

I think both her vision and dream go together, and are a mix of both literal and symbolic. Her vision on the porch is an expression of a serious reality:  the sorrow of heaven is bursting over the grievous sins in the world, particularly those against the weak… Hence, I believe her dream is the consequence of this vision, if the world continues on this path of destruction and ungodliness.

The contents of this dream and the possible interpretation may seem too incredible to some. In reality, they do not contradict in the least what Christ spoke of in Matthew 24 and Mark 13, nor what several saints and mystics have prophesied.

As [Jesus] drew near, he saw the city and wept over it, saying, "If this day you only knew what makes for peace—but now it is hidden from your eyes. (Luke 19:41-42)