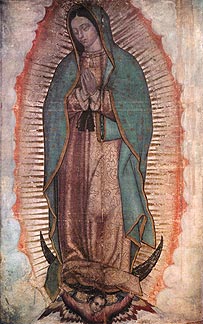 Our Lady of Guadalupe

"We shall break the cross and spill the wine. … God will (help) Muslims to conquer Rome. …God enable us to slit their throats, and make their money and descendants the bounty of the mujahideen."  —Mujahideen Shura Council, an umbrella group led by Iraq’s branch of al Qaeda, in a statement on the Pope’s recent speech; CNN Online, Sept. 22, 2006

In 1571, Pope Pius V called all of Christendom to pray the Rosary for the defeat of the invading Turks, a Muslim army far outweighing the Christians. Miraculously, the Christian army defeated the Turks. It is said that the Christian ships hung the image of Our Lady of Guadalupe on their bows as they sailed into battle.

In 2002, Pope John Paul II called all of Christendom to pray the Rosary for the cause of peace and the family, saying,

At times when Christianity itself seemed under threat, its deliverance was attributed to the power of this prayer, and Our Lady of the Rosary was acclaimed as the one whose intercession brought salvation. —Rosarium Virginis Mariae, 40

He also declared Our Lady of Guadalupe to be the "star of the new evangelization", hanging her as it were, on the bow of the Barque of Peter, the Church.

I clearly see the land of Italy before my eyes. It is as if a terrible storm were breaking out. I am forced to listen and I hear a word: ‘Exile.’ —Our Lady of All Nations, allegedly to Ida Peerdeman (20th century)

I saw one of my successors taking to flight over the bodies of his brethren. He will take refuge in disguise somewhere and after a short retirement he will die a cruel death. The present wickedness of the world is only the beginning of the sorrows which must take place before the end of the world.  —Pope St. Piux X

I believe today, our prayers should not only be for Pope Benedict, but also for the conversion of those who hate him. If Catholics are to be drawn into a "holy war", may holiness indeed be our only weapon:

To you who hear I say, love your enemies, do good to those who hate you, bless those who curse you, pray for those who mistreat you. (Luke 6:27-28)

Posted in HOME, THE FAMILY WEAPONS.