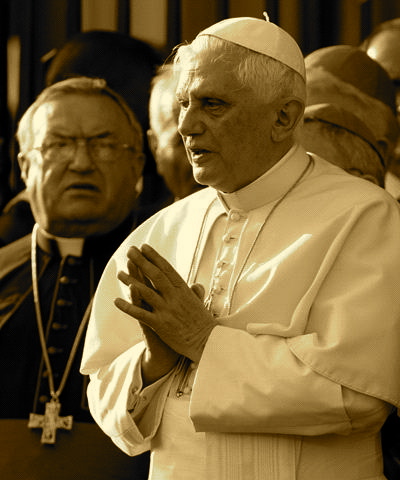 “If I get hold of the pope, I will hang him,” Hafiz Hussain Ahmed, a senior MMA leader, told protesters in Islamabad, who carried placards reading “Terrorist, extremist Pope be hanged!” and “Down with Muslims’ enemies!”  —AP News, Sept 22, 2006

“The violent reactions in many parts of the Islamic world justified one of Pope Benedict’s main fears . . . They show the link for many Islamists between religion and violence, their refusal to respond to criticism with rational arguments, but only with demonstrations, threats, and actual violence.”  —Cardinal George Pell, Archbishop of Sydney; www.timesonline.co.uk, September 19, 2006

TODAY’S Sunday Mass readings remarkably call to mind Pope Benedict XVI and the events of this past week:

The godless say to themselves, ‘Let us lie in wait for the virtuous man, since he annoys us and opposes our way of life, reproaches us for our breaches of the law and accuses us of playing false to our upbringing… (Wisdom 2, RSV)

Indeed Pope Benedict, in his speech at a German University last week, intended to examine how secular thinking which discards faith when it is not “empirically verifiable”, is unreasonable. In fact, the Pope underlined our commonality with Islam noting how,

“…the world’s profoundly religious cultures see this exclusion of the divine from the universality of reason as an attack on their most profound convictions.”  —POPE BENEDICT XVI;  Faith, Reason, and the University Memories and Reflections; September 12th, 2006, University of Regensburg.

However the Holy Father, in a brief analysis of religion itself, pointed out (with a quote from a medieval emperor) that violence has no place in religion as it is incompatible with the nature of God and the nature of the soul; that is, not acting reasonably is contrary to God’s nature. The Pope actually quotes from the Koran from an early teaching of Mohammed which supports this understanding:

But many Muslims have chosen instead to embrace ferocity, annoyed that the Pope has opposed the way of violence and reproached those who breach the law by abandoning their upbringing for irrational falsehoods. Ironically, they have threatened the Pope, using words not too distant from the author of this first reading:

Let us test him with cruelty and with torture, and thus explore this gentleness of his and put his endurance to the proof. Let us condemn him to a shameful death… (Wisdom 2)

For proud men have risen against me, ruthless men seek my life. They have no regard for God. (Psalm 53)

No commentary is needed, though I am certain the Holy Father will lean upon the refrain:

The Lord upholds my life.

James tells us in this reading how to know true religion from false.

Wisdom that comes down from above is essentially something pure; it also makes for peace, and is kindly and considerate, it is full of compassion and shows itself by doing good… Peacemakers, when they work for peace, sow the seeds which will bear fruit in holiness. (James 3)

The Pope apologized for the misunderstanding which has resulted from a misreading of his speech, and invited Muslim leaders to dialogue with him Monday. In fact, he has made known his deep respect for Muslims in an attempt to sow genuine peace.

Benedict XVI said that he hopes “that this serves to appease hearts and to clarify the true meaning of my address, which in its totality was and is an invitation to frank and sincere dialogue, with great mutual respect.”  —ZENIT News Agency, Vatican City, September 19, 2006

Indeed, the life of prayer, fasting, devotion, and adherence to moral laws is profound among many Muslims. Hence, Islam has become the fastest growing religion in the United States—if not the world—while Christianity is barely recognizable in the West, a mere shell of the Gospel which once built a free and moral civilization.

Still, the mark of true religion is and must be freedom. As Paul says, “Where the spirit of the Lord is, there is freedom” (2 Cor 3:17).  Violent conversion is incompatible with God, and therefore religion. James continues:

Where do these wars and battles between yourselves first start? Isn’t it precisely in the desires fighting inside your own selves? (Ibid.)

Desires for world power and domination? Indeed, Christ came to conquer nations, but not by violence, rather by love. Freedom is the hallmark of truth. Hence, reason must accompany faith to be able to discern the “truth which sets us free” from those doctrines which lead to death. How today’s readings are teaching us!

The Son of Man will be delivered into the hands of men, they will put him to death… (Mark 9)

Pope Benedict has understood from the beginning that he is a servant, and that his mission is to lay down his life for the sheep—a cost which comes at times with speaking the truth. Perhaps he is more aware of the price of this than we realize….

If anyone wants to be first, he must make himself last of all and servant of all. (Ibid.)

Pray for me, that I may not flee for fear of the wolves. —POPE BENEDICT XVI,  Inaugural Homily, April 24, 2005, St. Peter’s Square