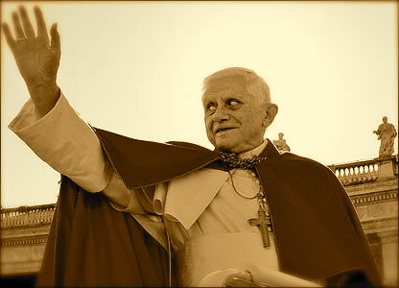 TWO things. The future is one of hope; and second—the world is not about to end.

The Holy Father in a Sunday Angelus addressed the discouragement and fear which has gripped many in the Church today.

When you hear of wars and insurrections," the Lord says, "do not be terrified; for such things must happen first, but it will not immediately be the end" (Luke 21:9). Mindful of this admonition of the Lord, the Church has from the very beginning lived in the prayerful expectation of the Lord’s return, scrutinizing the signs of the times and putting the faithful on guard against recurring messianic movements that from time to time proclaim that the end of the world is imminent. —-POPE BENEDICT XVI, Angelus, November 18th, 2007; ZENIT article:  On Trust in God

The end of the world is not nigh. But the prophetic pulse in the Church is that the end of an era appears to be drawing near. Despite my convictions on this and that of many of you, timing is a question which will remain a mystery to us. And yet, there is the sense that "something" is so very, very near. The moment is pregnant with change.

It is this "something" which I believe is the cause for hope. That the economic slavery of many in the world will come to an end. That addictions will be broken. That abortion will become a thing of the past. That the destruction of the planet will cease. That peace and justice will flourish. It may only come through the stripping and purification of a winter, but a new springtime will come. It may mean that the Church will pass through her own Passion, but it will be followed by a glorious Resurrection.

And how will this "something" come about? Through the intervention of Jesus Christ in His power, might, mercy, and justice. God is not dead—He is coming… somehow, in a powerful way, Jesus is going to intervene before the Day of Justice. What a Great Awakening for many this will be.

Let us not be afraid of the future, even when it appears bleak to us, for the God of Jesus Christ, who took up history to open it up to its transcendent fulfillment, is its alpha and omega, the beginning and the end. —-POPE BENEDICT XVI, Ibid.

It’s utterly impossible for me to build my life on a foundation of chaos, suffering and death. I see the world being slowly transformed into a wilderness, I hear the approaching thunder that, one day, will destroy us too. I feel the suffering of millions. And yet, when I look up at the sky, I somehow feel that everything will change for the better, that this cruelty too shall end, that peace and tranquility will return once more. —Diary of Ann Frank, July 15, 1944

May God… shortly bring to fulfillment His prophecy for transforming this consoling vision of the future into a present reality… It is God’s task to bring about this happy hour and to make it known to all… When it does arrive, it will turn out to be a solemn hour, one big with consequences not only for the restoration of the Kingdom of Christ, but for the pacification of… the world. We pray most fervently, and ask others likewise to pray for this much-desired pacification of society. —POPE PIUS XI, Ubi Arcani dei Consilioi "On the Peace of Christ in his Kingdom"