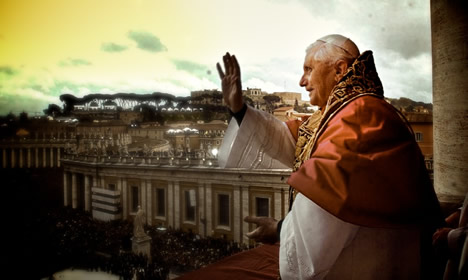 SINCE the world economy began to sway like a drunken sailor on the high seas, there have been calls from several world leaders for a “new world order” (see The Writing on The Wall). It has led to many Christians becoming suspicious, perhaps rightly so, of ripening conditions for a global totalitarian power, what some might even identify as the “beast” of Revelation 13.

Which is why some Catholics were horrified when Pope Benedict XVI released his new encyclical, Caritas in Veritate, that not only seemed to concede to a new world order, but even encourage it. It led to a flurry of articles from fundamentalist groups, waving “the smoking gun,” suggesting that Benedict is in collusion with the Antichrist. Likewise, even some Catholics appeared poised to abandon ship with a possible “apostate” pope at the helm.

And so, finally, I have taken a few weeks to carefully read the Encyclical—not just a few headlines or quotes taken out of context—in attempt to understand what is being said by the Holy Father.

Some might be surprised to know that many of the pontiffs, to one degree or another— from Leo XIII, John XXIII, Paul VI ,to John Paul II—recognized the emerging phenomenon of globalization in the past century.:

After all this scientific and technical progress, and even because of it, the problem remains: how to build up a new order of society based on a more balanced human relationship between political communities on a national and international level? —POPE JOHN XXIII, Mater et Magistra, Encyclical Letter, n. 212

Pope Benedict notes in his new encyclical the stunning pace of this new order.

The principal new feature has been the explosion of worldwide interdependence, commonly known as globalization. Paul VI had partially foreseen it, but the ferocious pace at which it has evolved could not have been anticipated. —Caritas in Veritate, n. 33

Brothers and sisters, do not be afraid to welcome Christ and accept his power … Open wide the doors for Christ. To his saving power open the boundaries of states, economic and political systems, the vast fields of culture, civilization and development.… —POPE JOHN PAUL II, Inaugural homily of his pontificate, Oct. 22, 1978; ewtn.com

And he would later emphasize the distinction between a global brotherhood vs global empire.

Is this not the time for all to work together for a new constitutional organization of the human family, truly capable of ensuring peace and harmony between peoples, as well as their integral development? But let there be no misunderstanding. This does not mean writing the constitution of a global super-State. —POPE JOHN PAUL II, Message for the World Day of Peace, 2003; vatican.va

So herein lies the danger, and the underlying warning throughout Pope Benedict’s new encyclical: will this new world order, in fact, open the doors to Christ, or close them? Humanity is at a serious crossroads:

Paul VI clearly understood that the social question had become worldwide and he grasped the interconnection between the impetus towards the unification of humanity, and the Christian ideal of a single family of peoples in solidarity and fraternity. —Caritas in Veritates, n. 13

We see here a clear distinction made: that between a mere unification of humanity, and that of a “family of peoples” based on the Christian ideal of charity lived in truth. Simple unification is not enough:

As society becomes ever more globalized, it makes us neighbours but does not make us brothers. —POPE BENEDICT XVI, Caritas in Veritates, n. 19

Secular humanism seeks to make us neighbours, but not necessarily good ones; Christianity, in fact, seeks to make us into a family. In fact, can’t we even say that Jesus set forth this vision for a new world order right in the Gospels?

I pray not only for them, but also for those who will believe in me through their word, so that they may all be one, as you, Father, are in me and I in you, that they also may be in us, that the world may believe that you sent me. (John 17:20-21)

Thus, a new world order is not “evil” in and of itself or simply because it is a global movement. As John Paul II said,

Globalization, a priori, is neither good nor bad. It will be what people make of it. —Address to the Pontifical Academy of Social Sciences, April 27th, 2001

And so, Pope Benedict has laid out a lucid and prophetic vision in hopes that it will be a “good” movement, one that echoes the mind of Christ expressed in the Gospels and further elucidated in the Church’s social teaching. Make no mistake, though: Pope Benedict clearly sees the possibility that what is already beginning to emerge faces many obstacles and has every possibility of becoming very evil.

Pope Benedict’s encyclical can be summarized in the words of his predecessor:

…individual human beings are the foundation, the cause and the end of every social institution. —POPE JOHN XXIII, Mater et Magistra, n.219

Here, then, is where Pope Benedict and the pontiffs before him hold a vision of an unfolding New World Order that is clearly divergent from most modern thinkers: it is a vision at the service of human freedom, that of the “whole man” who is not just a physical-emotional being, but also spiritual.

Man is not a lost atom in a random universe: he is God’s creature, whom God chose to endow with an immortal soul and whom he has always loved. If man were merely the fruit of either chance or necessity, or if he had to lower his aspirations to the limited horizon of the world in which he lives, if all reality were merely history and culture, and man did not possess a nature destined to transcend itself in a supernatural life, then one could speak of growth, or evolution, but not development. —Caritas in Veritate, n.29

Without this “transcendent” dimension taken into account in the development of nations and peoples, we risk blowing a “great opportunity” (n. 33), as Benedict puts it, to become a truly human global family.

…without the guidance of charity in truth, this global force could cause unprecedented damage and create new divisions within the human family… humanity runs new risks of enslavement and manipulation.. —n.33, 26

How could there not be a clearer warning against the wrong kind of global order?

Still, many are upset, claiming that Pope Benedict is calling for a United Nations with “teeth”. The concern is that it is well known that the U.N. holds many agendas contrary to Church teaching, and actively uses whatever power it has to advance an anti-life agenda (while yet others hold the view that the U.N. could become an instrument of “the beast”…) But a more careful reading of the Holy Father’s words is needed here:

In the face of the unrelenting growth of global interdependence, there is a strongly felt need, even in the midst of a global recession, for a reform of the United Nations Organization, and likewise of economic institutions and international finance, so that the concept of the family of nations can acquire real teeth. —n.67

First, Pope Benedict is calling for a “reform” of the U.N—not an empowerment of its existing state, having recognized long before he became Pope of the fundamental problems often associated with the U.N.:

…efforts to build the future have been made by attempts that draw more or less profoundly from the source of liberal tradition. Under the title New World Order, these efforts take on a configuration; they increasingly relate to the U.N.and its international conferences… that transparently reveal a philosophy of the new man and of the new world… —Cardinal Joseph Ratzinger (POPE BENEDICT XVI), The Gospel: Confronting World Disorder, by Msgr. Michel Schooyans, 1997

A philosophy at times deeply at odds with the natural and moral law.

Second, it is a “concept of the family of nations” that he envisions acquiring teeth. That is, a true family of many diverse cultures, supporting one another in a spirit of solidarity, generosity, and true freedom based on charity in truth and an authentic justice that always upholds the common good. He is not calling for a singular power to exercise total control over every aspect of this family of nations, but an organized dispersion of power or “subsidiarity.”

In order not to produce a dangerous universal power of a tyrannical nature, the governance of globalization must be marked by subsidiarity, articulated into several layers and involving different levels that can work together. Globalization certainly requires authority, insofar as it poses the problem of a global common good that needs to be pursued. This authority, however, must be organized in a subsidiary and stratified way, if it is not to infringe upon freedom... —Caritas in Veritate, n.57

The Pope’s encyclical may appear to be overly optimistic in our “culture of death.” But it is attainable, he reminds us, only through the power of God.

On the other hand, ideological rejection of God and an atheisim of indifference, oblivous to the Creator and at risk of becoming equally oblivious to human values, constitute some of the chief obstacles to development today. A humanism which excludes God is an inhuman humanism. —Caritas in Veritate, n. 78

And thus, God has raised up prophets in our day, chief among them his Mother, to warn us that our society has indeed become “inhuman”. That without a holistic vision of the human person that accounts not only for his spiritual dimension but for the Source and Life of that dimension, we face an uncertain future. As John XXIII said, “Separated from God a man is but a monster, in himself and toward others…” (M. et M., n. 215).

A monster… and possibly a beast.

This ministry depends entirely upon your support: