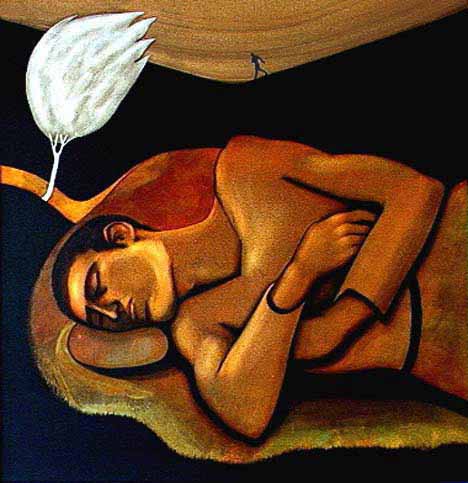 Artist Commentary: Elijah the Prophet is exhausted and in flight from the queen, who seeks to take his life. He is discouraged, convinced that his mission from God has come to an end. He wishes to die in the desert. The greater part of his work is about to begin.

IN that place of quiet before falling asleep, I heard what I felt was Our Lady, saying,

I felt immediately it was a call to each of us to become signs of contradiction. That is, by living without compromise the Gospel, which contradicts the spirit of the world, we become “prophets” to this generation.

Through a Great Awakening, the Lord has been calling us to a pilgrim state: a life of simplicity, prayer, and poverty in spirit. It is then by this detachment from material goods; by a spirit of meekness and humility; by a courage and boldness to speak the truth with great love… these are the ways Mary is calling us to be prophets in the midst of this generation.

This is no new Gospel. But I feel our Mother saying we should take it up with unfettered commitment and zeal, stirring into flame the gift we have been given! In this way, our very lives will announce the goodness and dawning justice of the Lord. Our lives will shout the needed reform, repentance, and conversion of this generation.

By our lifestyle of contradiction, we become lamps, shining in the darkness:

Be blameless and innocent, children of God without blemish in the midst of a crooked and perverse generation, among whom you shine as lights in the world. (Phil2:12)

Many readers of these meditations have heard the call to prepare for the transition, from this era into the next, which will occur through God’s merciful judgment. Already the first streaks of dawn are appearing as the Refiner’s Fire draws nearer.

And what happens as dawn nears? The morning star appears. Even though Revelation calls this Star Jesus, are we not His body? Is not Mary the preeminent member in this body? Indeed, she is, and we are the heel of Mary. Thus, the sign of the coming of Christ, the Rider upon a White Horse, is the rising up of the prophets to announce the dawning of a new Era of peace, mercy, and justice through lives which shine like the Morning Star.

But who are these prophets? Are they great charismatic leaders of our times? Possibly… but foremost, they are those who have been configured to the Son like Mary, who is gentle, meek, and most humble. Yes, the prophets whom God is calling forth are not the superstars, but the anawim… the small ones, the poor, the hidden—children of the Most High. They are the ones who are mocked, despised, and persecuted… who have forsaken the glory of this world for that of the next. They are fools for Christ who are seemingly nothing according to the world’s standards, as a heel is often the most unattractive and ragged looking part of the Body.

But as our Lady’s heel, these souls form an army.

THE ARMY OF GOD

The armies of heaven followed him, mounted on white horses and wearing clean white linen. Out of his mouth came a sharp sword to strike the nations. (Rev 19:14-15)

Who are these armies who follow Jesus? Are they the souls in Heaven, or the souls who are upon the earth? But isn’t the Body of Christ one?

The armies which follow, then, are those whose lives became a living Word during their time on earth, and those still on earth whose lives are that Word now forming on the lips of Christ. All of them have been washed in the Blood of the Lamb, and thus wear the white garment of baptism, kept unstained through the Sacraments. The Sword with which Jesus strikes the nations is, in part, the witness of His Body incarnating His Word. They are the testimony which proclaims the just actions of God.

As Christ’s physical body received the blows of His Passion and thus obliterated the spiritual judgment against us due to sin, so now, we who form his Mystical Body, receiving the blows and persecutions of the enemy, will be instruments by which the judgment upon creation caused by sin will be mitigated and souls will be saved. Our sufferings united with Christ’s on Calvary, and united to the sacrifice of the Mass throughout the world, will confound all the malice and designs of the adversary. It is the Triumph of the Immaculate Heart!

The word of God is living and effective, sharper than any two-edged sword… the accuser of our brothers is cast out, who accuses them before our God day and night. They conquered him by the blood of the Lamb and by the word of their testimony… (Heb 4:12; Rev 12:10-11)

Satan will be conquered by the word of our testimony and the vindication of Wisdom. Our testimony is our lives given up for Christ, even unto the shedding of blood. Saved by the Sword of His Word, we become that Word, His Body, and participate in the pronouncement of judgment upon the world by lives which contradict the lies of this generation, and light the way to Him who is the Truth.

These are His prophets, who share in the light of the Morning Star, and who give its light to mankind. Will you be counted among them?

We possess the prophetic message as something altogether reliable. Keep your attention closely fixed on it, as you would on a lamp shining in a dark place until the first streaks of dawn appear and the morning star rises in your hearts. (1 Pt 2:19)

To journeyå with Mark in The Now Word,
click on the banner below to subscribe.
Your email will not be shared with anyone.