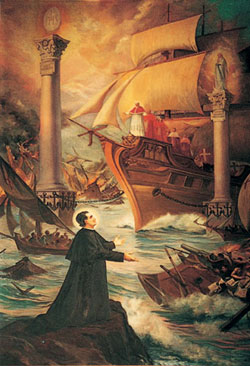 ON MAY 30TH, 1862, St. John Bosco had a prophetic dream that uncannily describes our times—and may very well be for our times.

… In his dream, Bosco sees a vast sea full of battle ships attacking one stately ship, which represents the Church. On the bow of this stately vessel is the Pope. He begins to lead his ship towards two pillars which have appeared on the open sea.

One pillar has a statue of Mary on it with the words "Help of Christians" inscribed on the base; the second pillar is much taller, with a Communion Host on top, and the words "Salvation of Believers" beneath.

The enemy ships attack with everything they’ve got: bombs, canons, firearms, and even books and pamphlets are hurled at the Pope’s ship. At times, it is gashed open by the formidable ram of an enemy vessel. But a breeze from the two pillars blows over the broken hull, sealing the gash.

And a great calm comes over the sea.

There are many reasons why this dream remarkably describes our times:

But the last point is the one I want to focus on: the "books and pamphlets". That is, the enemy ships attack the Church with propaganda.

The past year has seen a sudden explosion of negative and concentrated bombardments against the Catholic Church and her teachings. Notes Archbishop Hector Aguer of La Plata, Argentina,

We not talking about isolated incidents,” he said, but rather a series of simultaneous events that bear the “markings of a conspiracy.  —Catholic News Agency, Apr. 12, 2006

He cites as examples a recent issue of Rolling Stone magazine in which a famous rapper appears wearing a crown of thorns; obscene cartoons about Jesus in a French newspaper; and the logo of a popular Swedish brand of jeans depicting a skull with an inverted cross—a deliberate statement against Christianity which has resulted in 200 000 pairs being sold. Other recent attacks on the Church include the South Park cartoon mocking the Virgin Mary; MTV’s Popetown; the Judas Gospels; the Jesus Letters; Pope Joan; and most significantly, The Da Vinci Code.

Pope Benedict firmly denounced such attacks on Good Friday in the meditation on the Third Station,

Today a slick campaign of propaganda is spreading an inane apologia of evil, a senseless cult of Satan, a mindless desire for transgression, a dishonest and frivolous freedom, exalting impulsiveness, immorality and selfishness as if they were new heights of sophistication.

Our poll shows that for many, many people “The Da Vinci Code” is not just entertainment.  —MSNBC News Services, May 16, 2006

St. John Bosco, famous for the accuracy of his dreams, seems to have described the kind of attack we are now seeing on the Church. The Da Vinci Code, set to come out on film this May, has already sold over 46 million copies. I have personally spoken with religion teachers who are frustrated at how quickly their students have bought into the book’s lies about Christ’s divinity, despite the fact that secular historians have ripped the book’s "factuality" apart.

But if Bosco’s dream is indeed a witness to our times, then the future holds hope. While the Church may suffer a great persecution in the years ahead, we know that this battered ship of the Church, though "taking on water on every side" (Cardinal Ratzinger, Good Friday, 2005) will never be destroyed. This, Jesus promises in Matthew 16.

Pope John Paul II has steered her toward these two great pillars. Pope Benedict (who rode into World Youth Day on the bow of a ship) has vowed to continue the course. And the Church, once firmly moored to the Eucharist and Devotion to Mary, will one day experience a period of great calm and peace. This is what St. John Bosco foresaw.

And this seems to be the course on which we’ve set sail.