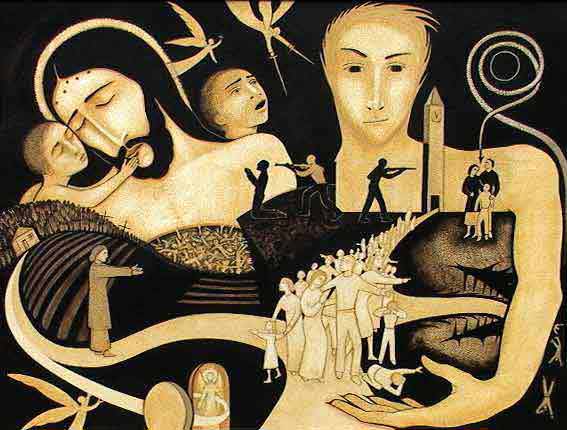 “Two Deaths” — the choice of Christ, or Antichrist by Michael D. O’Brien

First published on November 29th, 2006, I have updated this important writing:

AT the beginning of my ministry about fourteen years ago, I had a vivid dream which is coming again to the foreground of my thoughts.

I was in a retreat setting with other Christians when suddenly a group of young people walked in. They were in their twenties, male and female, all of them very attractive. It was clear to me that they were silently taking over this retreat house. I remember having to file past them. They were smiling, but their eyes were cold. There was a hidden evil beneath their beautiful faces, more tangible than visible.

The next thing I remember (it seems the middle part of the dream is either deleted, or by the grace of God I cannot remember it), I found myself emerging from solitary confinement. I was taken to a very clinical laboratory-like white room lit with fluorescent lighting. There, I found my wife and children drugged, emaciated, and abused.

I woke up. And when I did, I sensed—and I do not know how I know—I sensed the spirit of “Antichrist” in my room. The evil was so overwhelming, so horrific, so unimaginable, that I began to weep, “Lord, it can’t be. It can’t be! No Lord….” Never before or since then have I experienced such pure evil. And it was the definite sense that this evil was either present, or coming to the earth…

My wife awoke, hearing my distress, rebuked the spirit, and peace slowly began to return.

I have decided to share this dream now, under the guidance of the spiritual director of these writings, for the reason that many signs have been emerging that these “beautiful young people” have penetrated the world and even the Church itself. They represent not so much people, but ideologies which appear good, but are pernicious. They have entered under the form of themes such as “tolerance” and “love,” but are notions which mask a greater and more deadly reality: the tolerance of sin and the admission of anything which feels good.

In a word, lawlessness.

As a result of this, the world—dazzled by the beauty of these seemingly reasonable concepts—has lost the sense of sin. Thus, the time has been ripe for politicians, judges, and international governing bodies and courts to impose legislation which, under the guise of code words such as “gender equality” and “reproductive technology,” undermine the very foundations of society: marriage and the family.

The resulting climate of moral relativism has provided the impetus for what Pope Benedict calls a growing “dictatorship of relativism.” Innocuous “values” have replaced morals. “Feelings” have replaced faith. And flawed “rationalization” has replaced genuine reason.

It seems that the only value that is universal in our society is that of the glorified ego.  —Aloysius Cardinal Ambrozic, Archbishop of Toronto, Canada; Religion and Gain; November 2006

Most troublesome is that not only do few people recognize these disturbing trends, but many Christians are now taking up these ideologies. They are not filing past these beautiful faces—they are beginning to stand in line with them.

The question is will this growing lawlessness culminate in what 2 Thessalonians calls the “lawless one”? Will this dictatorship of relativism climax in the revelation of a dictator?

I am not saying for certain that the person of Antichrist is present on earth, though many contemporary mystics and even popes have suggested as much. Here, they seem to be referring to the “Antichrist” spoken of in Daniel, Matthew, Thessalonians, and Revelation:

…there is good reason to fear lest this great perversity may be as it were a foretaste, and perhaps the beginning of those evils which are reserved for the last days; and that there may be already in the world the “Son of Perdition” of whom the Apostle speaks.  —POPE ST. PIUS X, E Supremi: On the Restoration of All Things in Christ

That was said in 1903. What would Pius X say if he were alive today? If he were to walk into Catholic homes and see what is standard fair on their television sets; to see what kind of Christian education is delivered in Catholic schools; what kind of reverence is given at Mass; what kind of theology is being taught in our Catholic universities and seminaries; what is (or is not) preached at the pulpit? To see our level of evangelization, our zeal for the Gospel, and the way the average Catholic lives it? To see the materialism, waste, and disparity between the rich and the poor? To see the earth at large awash in famine, genocide, sexually transmitted diseases, divorce, abortion, approval of alternative lifestyles, genetic experimentation with life, and the upheaval in nature itself?

What do you think he would say?

John tells us that there is not just one, but many antichrists. Such we have seen with the likes of Nero, Augustus, Stalin, and Hitler.

As far as the antichrist is concerned, we have seen that in the New Testament he always assumes the lineaments of contemporary history. He cannot be restricted to any single individual. One and the same he wears many masks in each generation. —Cardinal Ratzinger (POPE BENEDICT XVI), Dogmatic Theology, Eschatology 9, Johann Auer and Joseph Ratzinger, 1988, p. 199-200

Are we poised for yet another? And is he the one the Church Fathers referred to with a capital “A”, the Antichrist of Revelation 13?

…before the Lord’s arrival there will be apostasy, and one well described as the “man of lawlessness”, “the son of perdition” must be revealed, who tradition would come to call the Antichrist. —POPE BENEDICT XVI, General Audience, “Whether at the end of time or during a tragic lack of peace: Come Lord Jesus!”, L’Osservatore Romano, Nov. 12th, 2008

What is most disquieting in our time is that the conditions for world-wide domination are growing into a perfect storm. The world’s continuing descent into chaos through terrorism, economic collapse, and a renewed nuclear threat are subsequently creating a vacuum in world peace—a vacuum which can either be filled with God, or with something—or someone—with a “new” solution.

It is becoming harder to ignore the realities before us.

Recently while in Europe, I met briefly with Sr. Emmanuel, a French nun of the Beatitudes Community. She is world renowned for her direct, anointed, and sound teachings on conversion, prayer, and fasting. For some reason, I felt compelled to speak about the possibility of Antichrist.

“Sister, there are many things occurring which seem to point to the possibility of the imminence of an antichrist.” She looked at me, smiling, and without missing a beat replied.

Can an antichrist be averted? Can prayer postpone another season of evil for a fallen world? John tells us there are many antichrists, and we know that one of them will culminate in an “apocalyptic period,” in the “Beast” of Revelation 13. Are we in that period? The question is important because, along with the rule of this individual, is a Great Deception which will deceive vast numbers of the human race…

…the one whose coming springs from the power of Satan in every mighty deed and in signs and wonders that lie, and in every wicked deceit for those who are perishing because they have not accepted the love of truth so that they may be saved. Therefore, God is sending them a deceiving power so that they may believe the lie, that all who have not believed the truth but have approved wrongdoing may be condemned. (2 Thess 2:9-12)

That’s why we are to “watch and pray.”

When one considers all things, from the apparitions of Our Blessed Mother (the “woman clothed in the sun” who battles the dragon); the revelations to St. Faustina that we are in the final time of mercy preparing for the “second coming”; the strong apocalyptic words of several modern popes, and the prophetic words of authentic seers and mystics—it would seem that we are on the very threshold of that night which proceeds the Day of the Lord.

We can respond to what Heaven is telling us: prayer and fasting can alter or lessen coming chastisements for an obviously wayward and rebellious people at this time in history. It seems that this is precisely what Our Lady of Fatima has told us, and is telling us once again through modern day apparitions: prayer and fasting, conversion and penance, and faith in God can change the course of history. Can move mountains.

But have we responded in time?