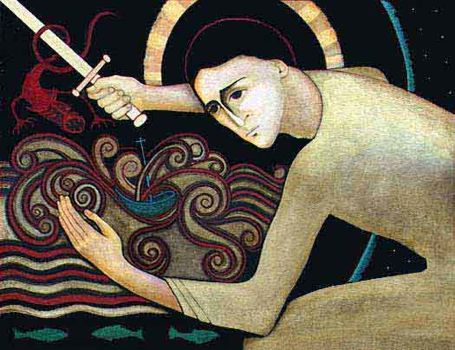 AS we come to see and better understand the vast scope of the enemy’s plan, The Great Deception, we should not be overwhelmed, for his plan will not succeed. God is revealing a far greater Masterplan—a victory already won by Christ as we enter the time of the Final Battles. Again, let me turn to a phrase from Hope is Dawning:

When Jesus comes, much will come to light, and the darkness will be scattered.

THE THRESHOLD OF HOPE

For a number of decades, the Mother of God, the Ark of His Covenant, has been speaking to this world in various apparitions, to gather children into the safety and refuge of her Immaculate Heart. At the same time we have seen tremendous upheaval in society, nature, and the Church, but especially the family.

Just as 11:19 and 12:1 of Revelation are divided by a “chapter” heading, one could also think of this as a spiritual threshold. This Woman clothed with the sun is laboring to give birth once again to her Son. And He is coming, this time, as the Light of Truth.

A great sign appeared in the sky, a woman clothed with the sun, with the moon under her feet, and on her head a crown of twelve stars. She was with child and cried out in pain as she labored to give birth. (Rev 12:1)

The Rider Upon A White Horse will come as a living flame of Love to illumine the hearts of mankind in what will be an unprecedented act of His true nature—Mercy and Goodness itself. This Love will let every man, woman, and child see themselves in the light of Truth, exorcising darkness from many, many hearts…

MICHAEL AND THE DRAGON

Then war broke out in heaven; Michael and his angels battled against the dragon. The dragon and its angels fought back, but they did not prevail and there was no longer any place for them in heaven. The huge dragon, the ancient serpent, who is called the Devil and Satan, who deceived the whole world, was thrown down to earth, and its angels were thrown down with it. (v. 7-9)

The term “heaven” likely does not refer to Heaven, where Christ and His saints dwell (note: the most suitable interpretation of this text is not an account of the original fall and rebellion of Satan, as the context is clearly with regard to the age of those who “bear witness to Jesus” [cf. Rev 12:17] ). Rather, “heaven” here refers to a spiritual realm related to the earth, the firmament or heavens (cf. Gen 1:1):

For our struggle is not with flesh and blood but with the principalities, with the powers, with the world rulers of this present darkness, with the evil spirits in the heavens. (Eph 6:12)

What does light do when it comes? It scatters the darkness. Jesus will come with His angels led by St. Michael the Archangel. They will cast out Satan. Addictions will be broken. Diseases will be cured. The sick will be made well. The downtrodden will leap for joy. The blind will see. The deaf will hear. Prisoners will be set free. And there will rise a great cry:

Now have salvation and power come, and the kingdom of our God and the authority of his Anointed. For the accuser of our brothers is cast out, who accuses them before our God day and night… (v.10)

We are crossing the threshold into a powerful time of healing and reconciliation!

Therefore, rejoice, you heavens, and you who dwell in them. But woe to you, earth and sea, for the Devil has come down to you in great fury, for he knows he has but a short time. (v. 12)

As I have written elsewhere, this “short time” will be the Devil’s final attempts to deceive with false signs and wonders—the Final Sifting of the wheat from the chaff. And this is where the remnant plays a crucial role which I will discuss in another writing.

THIS TIME OF GRACE

Here is a point which we should not miss: through our prayer and intercession, the number of those who may be deceived can be reduced. Now, as never before, we must understand the importance of this time of grace! See, also, why Pope Leo XIII was inspired to create the prayer to St. Michael to be recited after each Mass.

Our readiness to witness with our lives daily is what Jesus has already asked of us 2000 years ago, and prayer, penance, conversion, and fasting help dispose us to be used by the Holy Spirit. This time in The Bastion is not a “waiting out” for the storm to pass. Rather, it is preparation for and attentiveness to a marvelous battle for souls which is already here and is also coming… the final gathering of God’s children into the Ark, before the door is closed.