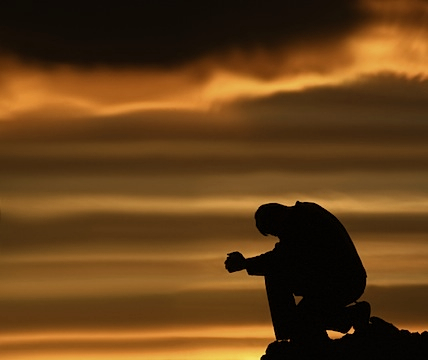 IF I may once again bare my soul to you, that somehow you may benefit from my weakness. As St. Paul said, "I will rather boast most gladly of my weaknesses, in order that the power of Christ may dwell with me." Indeed, may He dwell with you!

THE ROAD TO DESPAIR

Since my family moved to a small farm on the Canadian prairies, we have been met with one financial crisis after another through vehicle breakdowns, wind storms, and all kinds of unexpected costs. It has led me to great discouragement, and at times even despair, to the point where I began to feel abandoned. When I would go to pray, I would put in my time… but began to doubt that God was really paying much attention to me—a form of self-pity.

My spiritual director, however (thanks be to God!) saw what was happening in my soul, and brought it into the light (and has thus encouraged me to write about it here).

"You don’t really believe the Father wants to speak to you, do you?" I thought about his question and replied, "I don’t want to be be presumptuous…" My director went on.
"You are baptized aren’t you?"
"Yes."
"Then you are a ‘priest, prophet, and king?’" (cf. 1546 CCC)
"Yes."
"And what does Amos 3:7 say?"
"Indeed, the Lord GOD does nothing without revealing his plan to his servants, the prophets."
"Then the Father is going to speak to you. You need to renounce any inner vow you have taken that "God does not speak to me," and then listen. He’s going to speak to you!"

Now, some of you may find this odd. You might say, "Wait a minute, hasn’t the Lord been speaking to you through this blog for over five years now?" Perhaps he has (I will leave that discernment to the better judgment of the Church). But I see now that, in some way, I began to doubt that God will speak to me, personally, even though I have written and spoken about these things. I began to see myself as an insignificant piece of cosmic dust (comparitively), and why should I deserve His attention in that way? But "That," said my director, "is a lie from the prince of darkness. God will speak to you, and speak to you every day. He will speak to your heart, and your mind needs to listen."

And so, in obedience to my spiritual director, I renounced the lie that crept into my soul, and prepared that night to put a direct question to the Father (regarding one ongoing crisis that has been a drain on our family’s resources). That evening, as I drove along our country roads, I felt compelled to sing in the Spirit when suddenly the words poured from my mouth, "My son, My son, be wholly devoted to Me…." I pulled over, and a beautiful, encouraging "word" poured from my pen onto paper, including a response to my crisis. Two days later, the problem was resolved.

And each day now that I sit and listen, renouncing the lie that God will not speak to poor little me, the Father does speak. He is my Papa. I am His son. He communicates with His children.

And He is eager to speak to you.

One thing I heard Our Father say was,

I will change the world for the better, but first comes the Hour of Anxiety.

This Hour is drawing very, very near, brothers and sisters. I have written to you before how the light of God is being extinguished in the world, but in those who believe and remain faithful, that Light will burn brighter and brighter (see The Smoldering Candle). For those who think that I am fear-mongering, exaggerating, or overly-focused on the "end-times," the Holy Father echoed this very thing in a letter to the bishops of the world:

In our days, when in vast areas of the world the faith is in danger of dying out like a flame which no longer has fuel, the overriding priority is to make God present in this world and to show men and women the way to God. Not just any god, but the God who spoke on Sinai; to that God whose face we recognize in a love which presses "to the end" (cf. Jn 13:1)—in Jesus Christ, crucified and risen. The real problem at this moment of our history is that God is disappearing from the human horizon, and, with the dimming of the light which comes from God, humanity is losing its bearings, with increasingly evident destructive effects. —Letter of His Holiness POPE BENEDICT XVI to All the Bishops of the World, March 10, 2009; Catholic Online

The Hour of Anxiety coming is first and foremost the hour of midnight—of open rebellion against God and His Church (see Revolution!). One could also think of it as an Eclipse of the Son.

In seeking the deepest roots of the struggle between the "culture of life" and the "culture of death"… We have to go to the heart of the tragedy being experienced by modern man: the eclipse of the sense of God and of man. —POPE JOHN PAUL II, Evangelium Vitae, n.21

It is essentially an eclipse of  Truth. Fewer and fewer are those today who are speaking the truth, the whole truth, the entire Gospel as revealed to us through Jesus and entrusted to the Catholic Church. The sheep have been abandoned to political correctness, betrayed by apostasy within her ranks, and have themselves been swept away by the spirit of the world. It is critical, then, that you learn how to recognize the voice of the Good Shepherd. For the days will come when His voice may not be heard from the pulpits or pontifical seat (in so far as persecution silences our priests or Holy Father in many if not most regions in the world—perhaps one of the "destructive effects" of a world "losing its bearings"). At that time, His voice may only be heard in those whose hearts were filled with the oil of faith expressed in love so that the Light of Christ will continue to burn even in the greatest darkness. How will you know the voice of the Shepherd unless you actually believe you will hear His voice? And how will you hear His voice unless you take time to listen to Him? If like me, dear friends, you have begun to doubt that God speaks to you, then you have to renounce this lie. For Jesus said of the Good Shepherd:

…the sheep follow him, for they know his voice… My sheep hear my voice, and I know them, and they follow me; and I give them eternal life, and they shall never perish, and no one shall snatch them out of my hand. (John 10:4, 27-28)

You, His l
ittle lamb, should hear His voice—period. He will speak to you in the quiet of your heart, for the word of God is communicated in the silence of love. Be still and know that I am God, say the Scriptures. You will know the Shepherd when you are still, when you take time away each and every day to listen. Not just to speak, read, or recite prayers, but listen in faith, in trust. And I assure you, you will begin to hear and recognize the voice of God in the Scriptures, in the meditations of the Rosary, or simply in the quiet space of your heart as He pours out a personal word to you.

And why should we surprised that in these prophetic days He will not only speak often, but clearly? He does nothing without first revealing His plan to His servants, the prophets… those baptized believers whose hearts are open and listening.