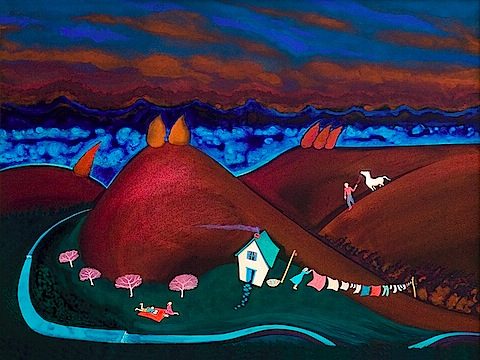 Written on the journey home…

AS our plane rises with the cumulous clouds into the atmosphere where angels and freedom dwell, my mind begins to drift back over my time in Europe…

It wasn’t that long an evening, maybe an hour and a half. I sang a few songs, and spoke the message that was on my heart for the people of Killarney, Ireland. Afterwards, I prayed over the individuals who came forward, asking Jesus to pour out His Spirit again upon the mostly middle-aged and senior adults who came forward. They came, like little children, hearts open, ready to receive. As I prayed, an older man began to lead the small group in songs of praise. When it was all over, we sat looking at one another, our souls filled with the Spirt and joy. They didn’t want to leave. I didn’t either. But necessity carried me out the front doors with my hungry entourage.

As the group I was traveling with finished their pizza, I was restless; I could still hear echoing in my heart the Irish singers down the street ringing out their soulful Celtic songs as we had passed them by. "I’ve got to go back there," I told my group who graciously dismissed me.

The band members were all in their thirties, perhaps younger. A banjo, a guitar, a mandolin, harmonica, trumpet, and upright bass. They gathered in a circle at the front of the pub, which was no more than twelve feet wide. And they sang. Oh, they sang, music oozing from their pores. They sang songs I hadn’t heard in years, songs written before I was born, songs passed on through the long Irish musical tradition. I stood there in disbelief at the sound I heard coming from these young men. I felt I had been transported back in time, back to a day when innocence was noble, when we walked down the street at night alone, when houses cost under $50,000 and when no one knew what the word pedophile meant. I was taken aback, because the joy I felt in the meeting earlier in the evening was the same joy I felt now as my heart danced to the rhythm of human goodness. Yes, that’s what it was: I felt the goodness of creation, and I swear the Creator was there dancing with me…

Some turbulence jars my mind back to earth as our aircraft soars above it. I am gazing at a view once known only to God and his ministering spirits: miniature towns, farms, and a patchwork of fields stretch out before me as scattered bodies of water reflect the blue mantle above. And I seem to understand… when God looks upon this world, beyond the clouds, beyond the borders, beyond the divisions man himself has created, He does not see race and religion. He looks into the heart of man, and with a breath of joy exclaims, "It is good!" The autumn leaves proclaim it, the deep blue in the sea sings it, the sound of the man’s laughter behind me… ah, it is good. Creation—between its groans and sighs—exhales the song of the Creator’s heart… "I have created you because I love You! I seek you now because I love you! I will never abandon you because I love you!"

I put a set of headphones on and begin to listen to Michael Bublé croon his song "Home"…surrounded by a million people, still feel all alone, I just wanna go home, oh I miss you, you know… Not a "Christian" song per se but a song of longing for that ancient goodness, home—a place that for many, despite its dysfunction, is a place of safety. The faces of my wife and children pass before me, and I can’t help but turn my own toward the window as warm tears begin to flow… droplets of inexpressible love for the handiwork of God, of goodness incarnate, woven and molded in the unique and irreplaceable souls of my family. Good. So good.

GOODNESS HAS A NAME

And I see with more clarity than ever before that the task that lies before me, before the whole Church, is to show the world this Goodness, this Goodness Who has a name: Father, Son, and Holy Spirit. It is not a distant Goodness, an impersonal force that randomly descends upon humanity at any given moment. No, it is an ever-present offering, so near, so close that my souls feels Heaven woven into the present moment…

I see also that we must find a way to show that Catholicism is not a philosophy, an institution, or mere organization… but a path, a living path to find Goodness, or rather, reconciliation with Goodness so as to free humanity from its distorted ideas of truth and beauty that lead it into slavery and sorrow. It is a living path for every soul, for every man and woman, for every Jew, Muslim, and atheist. It is a Way, rooted in Truth, that leads to Life, leads to Goodness… goodness that can already be found all around us a sign, a sacrament of Presence. God’s presence.

How Lord can I convey this word that says your creation is good, and that your Church leads to Goodness itself? How can this be done at a time when your Church has lost her credibility and is increasingly seen as a terrorist of peace?

The fasten-seat belt light is extinguished. The plane begins to empty. For now it’s time to go home…