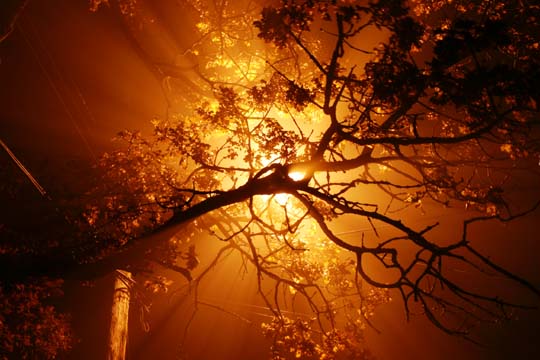 WE are living in extraordinary days. There is no question. Even the secular world is caught up in the pregnant sense of change in the air.

What is different, perhaps, is that many people who often shrugged off the notion of any discussion of “end times,” or Divine purification, are taking a second look. A second hard look.

It seems to me that a corner of the veil is lifting and we are understanding the Scriptures that deal with “end times” in newer lights and colors. There is no question the writings and words which I have shared here portend great changes on the horizon. I have, under the direction of my spiritual director, written and spoken of those things which the Lord has put in my heart, often with a sense of great weight or burning. But I too have asked the question, “Are these the times?” Indeed, at best, we are given just glimpses.

We have been living in the “end times” since Jesus ascended into Heaven, awaiting His return. However, what I am referring to here when I speak of “end times” is that specific generation spoken of in the Gospels which will experience the travails and glories of the coming reign of Christ.

With each passing day, it seems to me, that the fog is lifting.

Are we in that period of the labor pains that Jesus spoke of?

Nation will rise against nation, and kingdom against kingdom; there will be great earthquakes, and in various places famines and pestilences; and there will be terrors and great signs from heaven… All these are the beginning of the labor pains. (Luke 21:10-11; Matt 24:8)

When we consider the words “kingdom against kingdom”, this can also be interpreted as “ethnic group against ethnic group” within a society or nation. And we have seen extraordinary explosions of this, particularly in the evil form of genocide (think Yugoslavia, Rwanda, Iraq, and the Sudan, as we speak—all this in recent times.)

While earthquakes on the whole are not increasing according to seismologists, the number of people affected by earthquakes due to population growth and environmental degradation are. Thus, earthquakes in our generation are increasingly significant. And how can we disregard the tremendous death tolls of recent quakes in parts of the world? The Asian earthquake which generated a killer tsunami in 2005 is to name but one. It claimed nearly a quarter million lives.

We know there are warnings of an impending world-wide pandemic; there is the recent surge of concern this month again over the Asian bird flu. New strains of STD’s are emerging while, especially among teens, STD’s are epidemic. And there are drug-resistant bacterias and new viruses developing in the western world, not to mention mad cow disease. Also of note are the large numbers of species which are mysteriously and suddenly dying off in the oceans. Or even on land—for example, the recent unexplained death of 5000 birds in Australia.

Less known among the general public are the signs occurring in the heavens. At Marian shrines around the globe, there are thousands of reports of people seeing the sun “spin”, change colors, or occasionally appear to fall toward the earth. Images of Jesus, Mary, Joseph, or the Christ Child appearing in the sun are common at these places of prayer.  Recent remarkable videos from Medjugorje show the sun as a black dot that could be seen with the naked eye (view it here). There have also been unique cloud formations, oddities in the moon, and now, the dramatic appearance of Comet McNaught which may become the brightest comet in recorded history. It has been said that before major upheavals in history, comets appeared as a kind of harbinger…

Does one even need to comment on the weather?

Also less known are powerful dreams and visions, some of which have been shared here, and continue to arrive in my email. Many people speak of vivid dreams in which they are walking through a desolate grey landscape. Others speak of the stars spinning and falling to the earth. Some recount visions and dreams of trumpets being blown. And yet others detail military conflicts. These are all descriptions which can be found in the Scriptures regarding those “end times.”

One striking vision comes out of the underground church in China. As it was told to me recently from a North American contact, for your discernment:

Two mountain villagers descended into a Chinese city looking for a specific female leader of the underground Church there. This elderly husband and wife were not Christians. But in a vision, they were given the name of this woman they were to look for and deliver a message.

When they found her, the couple said, “A bearded man appeared to us in the sky and said we were to come tell you that ‘Jesus is returning.'”

And yet, are we merely entering a season of great purification and change?

We know partially and we prophesy partially, but when the perfect comes, the partial will pass away… (1 Cor 13:9)

Is it possible, though, that there will be a graduation of understanding as we head toward perfection, which will only materialize when we see Christ face to face? This in fact is the teaching of the Church:

It’s as though we are climbing a mountain toward the end of time.  Each generation is a little higher, and thus can see a little further than the one before. But there will eventually come a generation which will reach the first ice of this snow-capped peak…

There is an extraordinary dialogue in the Old Testament which has been persistent in my mind recently. In the book of Daniel, the prophet by the same name is given revelations which refer to the “end times.” These things were written down in a book, about which an angel says to him:

The book is sealed until the end time, which seems to suggest it will be opened then. It is a time, says the angel, when many shall fall away and evil shall increase. Sound familiar? Jesus said the same thing of that particular generation of the “end times.”

Perhaps, this is the greatest sign of all in our day—particularly as science begins to manipulate and alter the very materials of life. And never before have we seen such a falling away from the Faith as we have in the past 40 years or so. And yet, Jesus seems to indicate that this hardening of hearts will come after a great persecution… a persecution which seems increasingly near.

In other translations of Daniel’s text, it says that “knowledge shall increase.” It seems to me that knowledge and understanding of the context of our days is increasing… as though everything is slowly coming into focus.

The revelation of Revelation: