THE NOW WORD ON MASS READINGS
for May 22nd, 2014
Thursday of the Fifth Week of Easter
Opt. Mem. St. Rita of Cascia 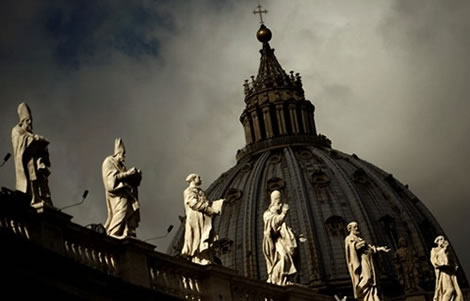 LAST year in The Sixth Day, I wrote that, ‘Pope Benedict XVI in many ways is the last “gift” of a generation of giant theologians who have guided the Church through the Storm of apostasy that is now going to break out in all its force upon the world. The next pope will guide us too… but he is ascending a throne that the world wishes to overturn.’ [1]cf. The Sixth Day

That Storm is now upon us. That terrible rebellion against the seat of Peter—the teachings preserved and derived from the Vine of Apostolic Tradition—is here. In a candid and necessary speech last week, Princeton Professor Robert P. George said:

The days of socially acceptable Christianity are over, the days of comfortable Catholicism are past… Powerful forces and currents in our society press us to be ashamed of the Gospel—ashamed of the good, ashamed of our faith’s teachings on the sanctity of human life in all stages and conditions, ashamed of our faith’s teachings on marriage as the conjugal union of husband and wife. These forces insist that the Church’s teachings are out of date, retrograde, insensitive, uncompassionate, illiberal, bigoted, even hateful. —National Catholic Prayer Breakfast, May 15th, 2014; LifeSiteNews.com; Dr. Robert was appointed to the U.S. Commission on International Religious Freedom by the Speaker of the U.S. House of Representatives in 2012.

But in truth, the teachings of the Catholic Church bring joy precisely because they are rooted in that truth which Jesus said would set us free.

Interesting. Not only do the Apostles go back to Peter to reference the appropriate pastoral and doctrinal approach to the challenges of their day (among one of the first acts underscoring Peter’s primacy)—but Jesus Himself, though God incarnate, always referenced His actions to the Father:

So this is where you and I are called to be witnesses of the joy of holy obedience. In my own life, the teachings of the Church, even the most challenging, such as on contraception, chastity, and sacrifice, have only served to bring an ever deepening love and friendship in my marriage, dignity, self-control, peace, and joy in our family life. In a word, the fruit of the Holy Spirit.

Catholicism is not merely a “collection of prohibitions” but a path of encounter with the living God. Pope Francis has called us to focus on bringing into the world the “joy” of our relationship with Christ, for “technological society has succeeded in multiplying occasions of pleasure, yet has found it very difficult to engender joy.” [2]POPE PAUL VI, Gaudete in Domino, May 9th, 1975 And Jesus makes it clear that our joy is to be found in living the revealed truth—not watering it down because it is too difficult or seemingly out of style.

Am I prepared to pay the price that will be demanded if I refuse to be ashamed, if, in other words, I am prepared to give public witness to the massively politically incorrect truths of the Gospel…? Easter is coming. And we, who cherish His Cross, and are willing to bear his suffering and shame, will share in his glorious resurrection. —Dr. Robert P. George, National Catholic Prayer Breakfast, May 15th, 2014; LifeSiteNews.com

He has made the world firm, not to be moved… (Today’s Psalm)

Pray, pray, pray…. for one another.