THE NOW WORD ON MASS READINGS
for Tuesday, June 30th, 2015
Opt. Memorial of The First Martyrs of the Holy Roman Church 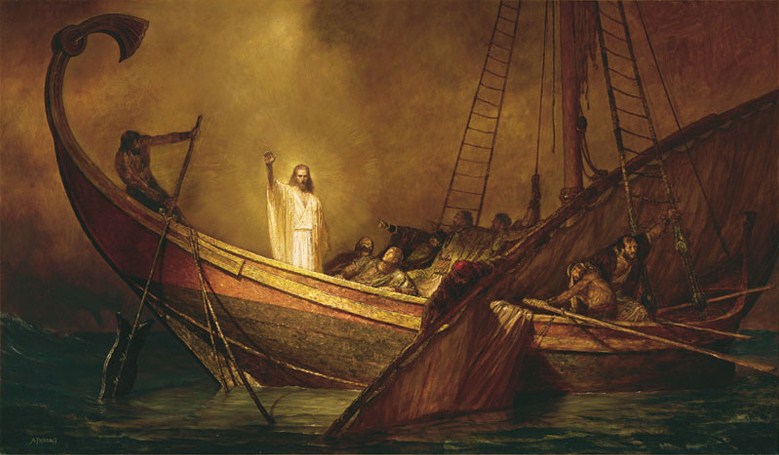 “Peace Be Still” by Arnold Friberg

LAST week, I took some time off to take my family camping, something we rarely get to do. I set aside the Pope’s new encyclical, grabbed a fishing rod, and pushed away from shore. As I floated on the lake in a small boat, the words swam through my mind:

Keeper of the Storm…

I was thinking of the Gospel, today’s Gospel in fact, when Jesus stood on the bow of His sinking ship and commanded the seas to be calm. I thought to myself, shouldn’t the words be “Calmer of the Storm”? But there is a difference between the one who calms and the one who keeps: the latter is in command of everything.

Yes, Jesus is not only going to be the Calmer of this present Storm, but He is the One who commanded it to come forth in the first place. He is the one who breaks open the Seven Seals of Revolution:

The word of the Lord came to me: Son of man, what is this proverb you have in the land of Israel: “The days drag on, and every vision fails”? Say to them therefore… The days are at hand and every vision fulfilled… for whatever word I speak shall happen without delay. In your days, rebellious house, whatever I speak I will bring about… The house of Israel is saying, “The vision he sees is a long time off; he prophesies for distant times!” Say to them therefore: thus says the Lord God: none of my words shall be delayed any longer… (Ezekiel 12:25)

The purification of the Church and the world is at hand. It is no coincidence that the first reading today, the Gospel, and the Memorial of the first martyrs of the Church line up as they do—much like Venus and Jupiter are lining up tonight as they once did 2000 years ago, perhaps on the very night of Christ’s birth as some astronomers suggest. [1]cf. abc13.com For the apostasy of this generation is the seed of this Storm, which Our Lord permits according to His providential plan. As it says in Hosea:

When they sow the wind, they will reap the whirlwind. (Hos 8:7)

But we are mistaken to think that when Jesus rose to calm the wind and seas that He was speaking only to the elements. No, it was primarily to the Apostles that His words were addressed:

Today, persecution is rising like a great wind, and apostasy like a great wave as though it were spewing forth from the very mouth of Satan himself. [2]cf. Hell Unleashed Indeed, it is. As Pope Benedict said:

This fight in which we find ourselves [against]… powers that destroy the world, are spoken of in chapter 12 of Revelation… It is said that the dragon directs a great stream of water against the fleeing woman, to sweep her away… I think that it is easy to interpret what the river stands for: it is these currents that dominate everyone, and want to eliminate the faith of the Church, which seems to have nowhere to stand before the power of these currents that impose themselves as the only way of thinking, the only way of life. —POPE BENEDICT XVI, first session of the special synod on the Middle East, October 10th, 2010

As we watch more and more cardinals against cardinals, and bishops against bishops as the apostasy grows, perhaps we too feel as Pope Benedict once expressed, that the Church is…

…a boat about to sink, a boat taking in water on every side. —Cardinal Ratzinger (POPE BENEDICT XVI), March 24, 2005, Good Friday meditation on the Third Fall of Christ

And so, many Catholics are crying out today:

And the Keeper of the Storm turns to you and I and says,

Why are you terrified, O you of little faith? (Today’s Gospel)

Do Jesus’ words seem harsh? They need to be stern, brothers and sisters, because some of you are thinking of jumping overboard! Some of you, troubled by the sometimes vague and un-contexualized comments of the Pope—the Captain of the Barque of Peter—want off the ship! Yes, just as Peter commandeered Christ’s boat through that storm, so once again, Peter guides the ship today through the Storm (while Jesus appears to be sleeping in the bow). [3]cf. A Tale of Five Popes and a Great Ship But Jesus is the Keeper of the Storm. [4]cf. Jesus, the Wise Builder

Yesterday in prayer, I sensed the Heavenly Father gently rebuke me as well: “What does comfort have in common with the Cross? Who are you child? Are you not a disciple of the Crucified One? Then follow Him!” You see, everything that is happening today in the world has been prophesied in the Scriptures, the popes have been warning about it for over a hundred years, [5]cf. Why Aren’t the Popes Shouting? and as a “living image of the Church,” [6]POPE FRANCIS, Angelus, June 29th, aleteia.org Our Blessed Mother has been appearing for centuries to prepare us for this hour. Clearly, Jesus is the Keeper of the Storm!

What He asks of you and I now is faith. Ah, how we have returned to the very heart of the Gospel! Faith, faith, faith. Whether it was an adulteress, a Roman pagan, or a tax collector, whenever they turned to Jesus in trust, He would say, “Your faith has saved you.” There is no new Gospel:

For by grace you have been saved through faith, and this is not from you; it is the gift of God… And the victory that conquers the world is our faith. (Eph 2:8; 1 John 5:4)

It will be no different in this Storm. Reflect on the first reading and how God not only provided for Lot, but how Lot’s response was
key to his salvation.

Last, I want to share with my readers a word from my dear friend, Pelianito. For years, we have been receiving parallel words in prayer. We don’t compare notes; we only communicate a few times a year; but once again, she received a “word” from the Lord that echoed my own. It is a gentle rebuke from the Lord that there is no longer time for waffling, for “looking back” as did Lot’s wife. Rather, we must decide to live and act for God in faith… or drown in the Storm.

Beloved children, make every effort to live always in the Spirit. Let the flesh serve the Spirit, for to deny the Spirit in favour of the flesh is death. Submit your mind and your heart in all things to God. This is the way of life and peace. Those who live in the Spirit will never be at home in the world, and indeed the world will hate them. Do not let this disturb you, for your home in heaven is waiting for you. There you will know with surpassing certainty that you belong. Therefore live each moment as if you are already there. In this way, you will have no sorrow, no fear. All will seem so small and temporary. This sojourn in a foreign land is your test, my children. Are you with me or against me? Live in the Spirit, for the Spirit, and through the Spirit and you will begin your heaven on earth. Be at peace, my children, no matter what happens. Shalom.” —June 28th, 2015; pelianito.stblogs.com

Thanks for supporting this full-time ministry.
This is the most difficult time of year,
so your donation is greatly appreciated.

[+]
Posted in HOME, PARALYZED BY FEAR.