THE NOW WORD ON MASS READINGS
for January 21th, 2014
Memorial of St. Agnes 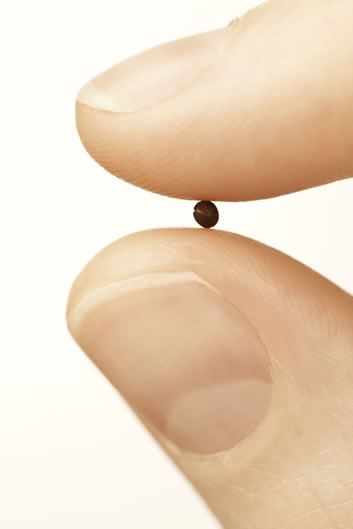 The mustard seed grows into the largest of trees

THE Pharisees had it all wrong. They were obsessed with details, watching like hawks to find fault with this or that person, with any little thing that wasn’t according to “standard.”

The Lord is also concerned with the little things… but in a much different way.

In today’s first reading, God does not choose Jesse’s tall and stately sons to be king, but his little shepherd boy, David: “Over the people I have set a youth.” For,

God does not see as man sees; man looks at appearances but the Lord looks at the heart. (First reading; Jerusalem translation)

And the kind of heart the Lord looks for are “little” hearts:

Unless you turn and become like little children, you will not enter the kingdom of heaven. (Matt 18:3)

We know, by reading the Psalms, that David always found a way to be little.

Neither does the Lord expect us to do more than the duty of the moment, those little matters throughout the day that compose His will, and strengthen us to love our neighbour more and more.

Well done, my good and faithful servant. Since you were faithful in small matters, I will give you great responsibilities. (Matt 25:21)

Even then, it does not take gargantuan faith for grace to move in our lives.

If you have faith the size of a mustard seed, you will say to this mountain, ‘Move from here to there,’ and it will move. Nothing will be impossible for you. (Matt 17:20)

Jesus was also moved by the seemingly little things in the eyes of the world, such as the widow’s donation of a few cents; the little basket of five loaves and two fish; the least of the brothers found in the poor; little Zacchaheus the tax collector; and most especially, that little girl named Mary who would become His mother—and the Mother of all peoples.

God does not look at appearances. In fact, He doesn’t measure us by our gifts and talents either, but rather, by what we do with them. For, “every one to whom much is given, of him will much be required.” [1]cf. Luke 12:48 That’s why in eternity, we may be surprised that the “greatest in Heaven” will be those who were little—humble, gentle, and meek of heart. They may have only been given one “talent” in this life—not five or ten—but they did not bury it in the ground, and instead, gave all their heart, body, mind, and soul into using it for the Kingdom.

Today is the Memorial of St. Agnes, a thirteen year old martyr who was little in stature, but grand in faithfulness. So commit this day not to great things, but “little” things—the little things that matter.

But do them with great love.