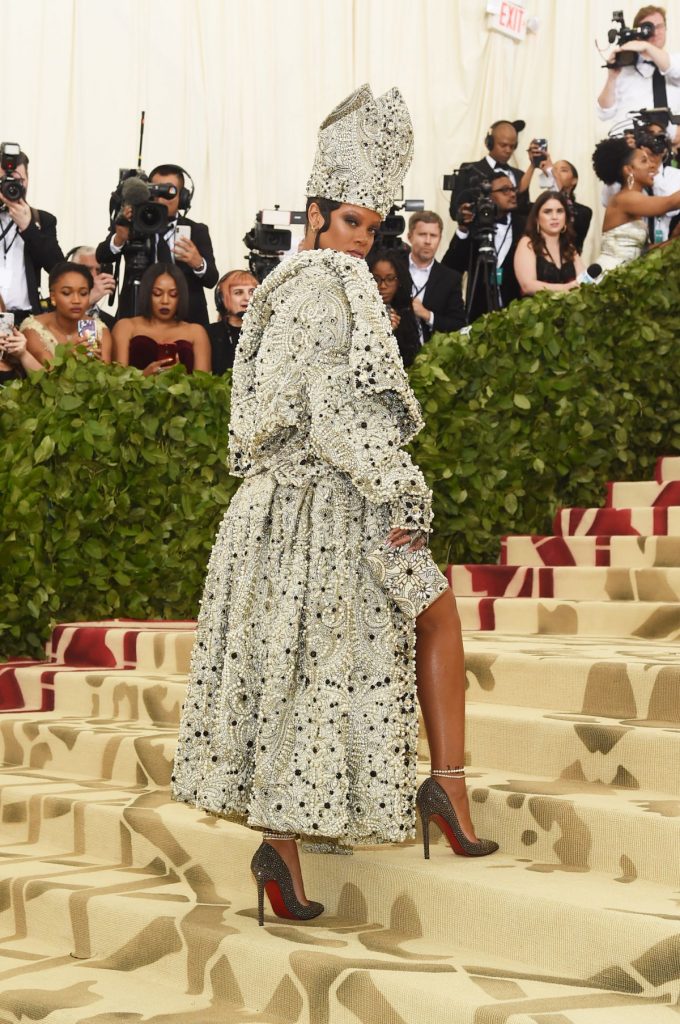 CHRISTIANS in the Western World are no stranger to mockery. But what happened this week in New York pushed new boundaries even for this generation.

It was a gala event at the Metropolitan Museum of Art’s Costume Institute, with this year’s theme titled: ‘Heavenly Bodies: Fashion and the Catholic Imagination.’ On display would be several centuries of Catholic “fashion.” The Vatican had lent some vestments and garments for display. The Cardinal of New York would be in attendance. It was to be an opportunity, in his words, to reflect “the ‘Catholic imagination,’ [for] the truth, goodness, and beauty of God is reflected all over… even in fashion. The world is shot through with His glory.'” [1]cardinaldolan.org

But what happened that evening was neither part of the “Catholic imagination” as we know it, nor was it a reflection of “truth, goodness, and beauty” as the Catechism intended. Celebrities—many like Rhianna or Madonna, known for their open mockery of Christianity— 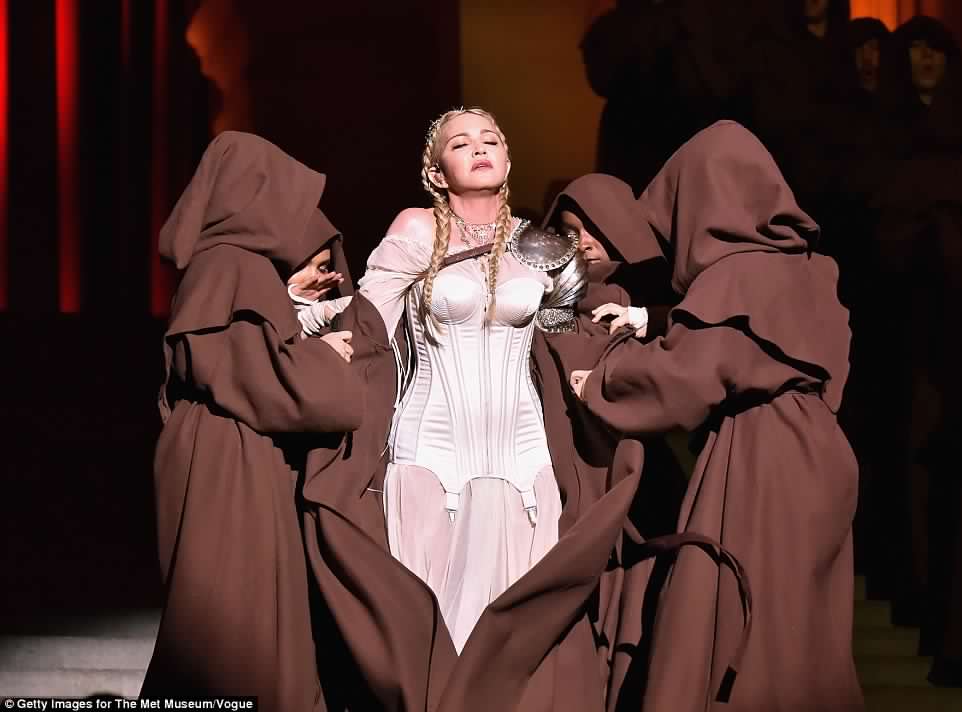 donned imitation monastic robes, bishop-like vestments, and other religious-type garments often altered in the most seductive manner. Victoria’s Secret model, Stella Maxwell, wore images of the Virgin Mary all over her strapless gown. Others wore high-cut dresses with the Cross emblazoned across their hips or breasts. Others appeared as a gawdy “Jesus” or immodest “Mary.”

There is a massive difference between seeing religious artifacts tastefully and respectfully laid out in a museum, and seeing them stuck on some flesh-flaunting celebrity’s head at a party… A lot of the imagery was highly sexualised, which you might think not just inappropriate for a religious theme but also incredibly offensive to the many victims of sex abuse in the Catholic Church. —May 8th, 2018; dailymail.co.uk

But Catholics don’t need Mr. Morgan to tell them this is inappropriate. St. Paul did that long ago: 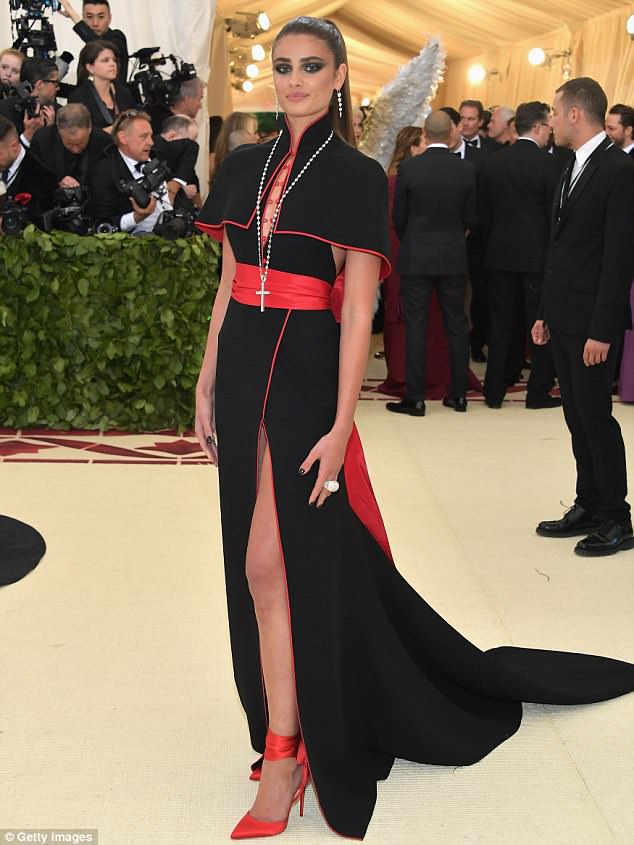 For what partnership do righteousness and lawlessness have? Or what fellowship does light have with darkness?… “Therefore, come forth from them and be separate,” says the Lord, “and touch nothing unclean; then I will receive you and I will be a father to you, and you shall be sons and daughters to me, says the Lord Almighty.” 1 Cor 6:14-18

If this event was about “truth, beauty, and goodness,” the question must be asked: how many men there found the “truth,” or did they rather find tight dresses? How many men were captivated by “beauty” or, rather, bulging breasts? How many were led to a deeper “goodness,” or simply, to gawking?

Avert your eyes from a shapely woman; do not gaze upon beauty that is not yours; through woman’s beauty many have been ruined, for love of it burns like fire… I will not set before my eyes anything that is base. (Sirach 9:8; Ps 101:3)

Pope Francis has indeed been encouraging Christians to “accompany” others, to be present to others, to take on the “smell of the sheep”, so to speak. We can’t evangelize behind a wall. But as Paul VI wrote:

The Catholic Church’s participation in the gala begs the question: should we accompany others into the “near occasion of sin”? Shouldn’t our message and presentation of “truth, beauty, and 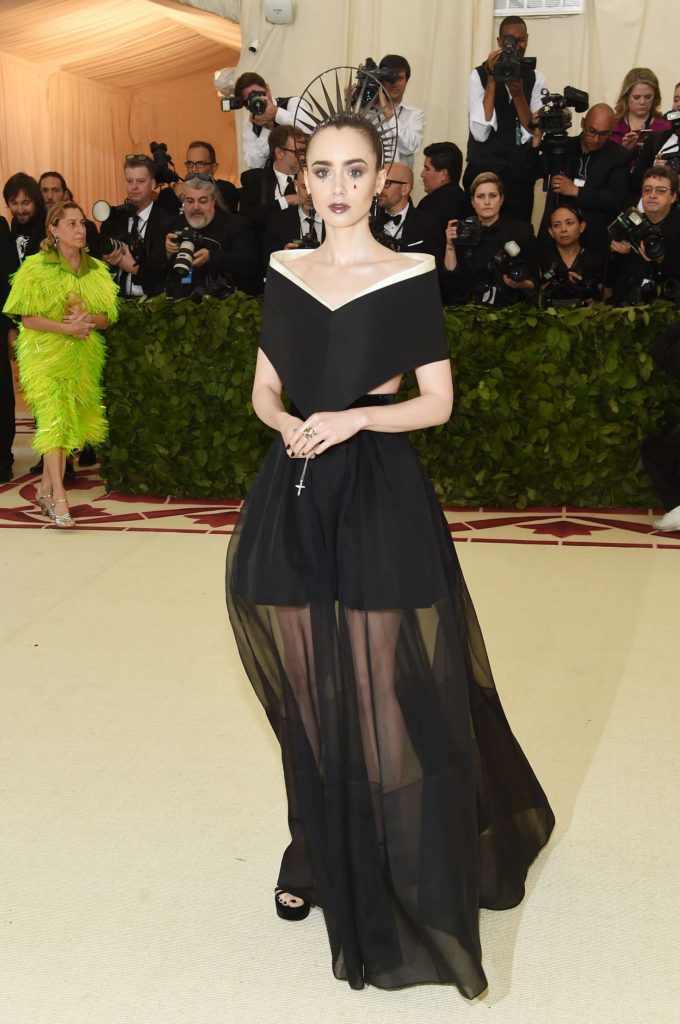 goodness” be a reflection of the Creator, and not of that fallen angel? And shouldn’t our witness appear to be a “sign of contradiction” — not compromise with the world?

…the Church fulfils her mission to the extent that, in union with Christ, she accomplishes every one of her works in spiritual and practical imitation of the love of her Lord. —BENEDICT XVI, Homily for the Opening of the Fifth General Conference of the Latin American and Caribbean Bishops, May 13th, 2007; vatican.va

How did God love us? The Good Shepherd came to lead us to green and life-giving pastures, not skanky sloughs. He came to deliver us from sin, not enable it.

So, were the celebrities there being moved “ever closer to God?” Perhaps actress Anne Hathaway, wearing a “voluminous cardinal red gown,” summarized the evening well; when someone on the red carpet shouted, “You look like an angel,” she snapped back “Actually, I’m feeling quite devilish.” [2]cruxnow.com

As Christians, we have such an incredible opportunity to shine at this time when the 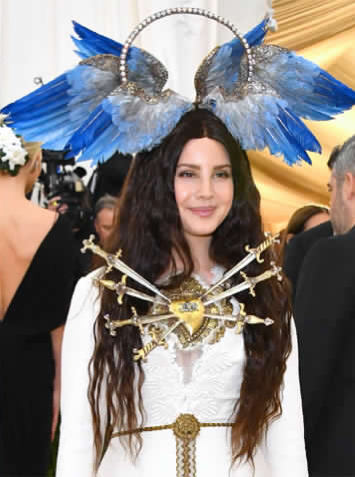 world is sleep-walking in darkness. How? We can reveal to others the “truth” by rejecting political correctness. We can reveal “beauty” through speech, music, art, and creativity that builds up rather than indignifies; and we can reveal “goodness” by carrying ourselves with modesty, kindness, gentleness, and patience, all the while refusing to co-operate in the works of darkness. This is the Counter-Revolution we are called to…

…that you may be blameless and innocent, children of God without blemish in the midst of a crooked and perverse generation, among whom you shine like lights in the world. (Philippians 2:15)

A FOOTNOTE AND A WARNING

The evangelistic vision of Pope Francis is that we would imitate Christ; that we would seek out the lost and “attract” them to the Gospel with the love of Christ.

…He gives love. And this love seeks you and waits for you, you who at this moment do not believe or are far away. And this is the love of God. —POPE FRANCIS, Angelus, St. Peter’s Square, January 6th, 2014; Independent Catholic News

As we were judged worthy by God to be entrusted with the gospel, that is how we speak, not as trying to please human beings, but rather God, who judges our hearts. (1 Thessalonians 2:4)

The “life” I speak of here is most especially the Eucharistic life of Jesus. This is why this gala has cut so many of us to the heart. The vestments of the Catholic priesthood are not just a lovely custom. They are a reflection of Jesus Christ, our High Priest, who offers 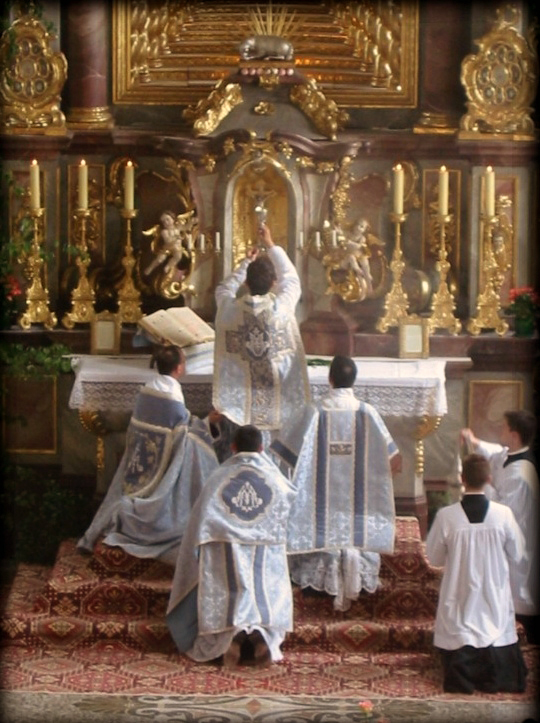 Himself to us as both Victim and priest in the Holy Mass. The vestments are a sign of Christ Himself in personi and that authority which He gave to the Apostles and their successors to “do this in memory of Me.” To sexualize the vestments and religious attire, then, is a sacrilege. Because—and here is the irony of it all—they are a prophetic witness to a renunciation of the world for a higher good: betrothal and union with God. And as Mr. Morgan said, it is especially grievous at a time when the sexual sins of priests throughout the world have wounded so many.

This news story was particularly striking to me when it broke that evening. Because earlier in the day, I had been reflecting on a passage in the Book of Revelation that I believe describes the state of America today, that of “Mystery Babylon”:

Then I heard another voice from heaven say: “Depart from her, my people, so as not to take part in her sins and receive a share in her plagues, for her sins are piled up to the sky, and God remembers her crimes.” (v. 4-5)

We are to “come out” of Babylon, not so as to remain hidden beneath a bushel basket, but precisely in order to become an authentic and pure light to others so as to lead them out—not into darkness.