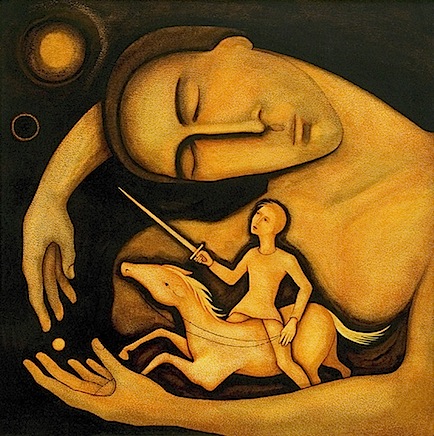 Whatever it may be, it is clear that this is another area where Catholics are sorely under-catechized. Often, it is those on a personal inquisition to expose the “false prophet” who are lacking the most understanding (and charity) in how the Church discerns private revelation.

In this writing, I want to address some things on private revelation that other writers rarely cover.

The goal of this website has been to prepare the Church for the times which lay directly before her, drawing primarily upon the Popes, the Catechism, and the Early Church Fathers. At times, I have referred to approved private revelation such as Fatima or the visions of St. Faustina to help us understand better the course we are on. On other, more rare occasions, I have directed my readers toward a private revelation without official approval, so long as it:

Dr. Mark Miravalle, a professor of Theology at Franciscan University of Steubenville, in a book which breathes much needed fresh air into this subject, strikes the necessary balance in discernment:

It is tempting for some to regard the entire genre of Christian mystical phenomena with suspicion, indeed to dispense with it altogether as too risky, too riddled with human imagination and self-deception, as well as the potential for spiritual deception by our adversary the devil. 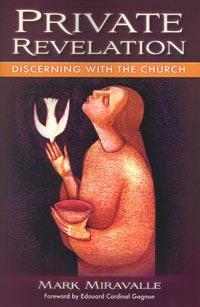 That is one danger. The alternate danger is to so unreservedly embrace any reported message that seems to come from the supernatural realm that proper discernment is lacking, which can lead to the acceptance of serious errors of faith and life outside of the Church’s wisdom and protection. According to the mind of Christ, that is the mind of the Church, neither of these alternative approaches—wholesale rejection, on the one hand, and undiscerning acceptance on the other—is healthy. Rather, the authentic Christian approach to prophetic graces should always follow the dual Apostolic exhortations, in the words of St. Paul: “Do not quench the Spirit; do not despise prophecy,” and “Test every spirit; retain what is good” (1 Thess 5:19-21). —Dr. Mark Miravalle, Private Revelation: Discerning with the Church, p.3-4

THE POWER OF THE HOLY SPIRIT

I think the single biggest reason for the exaggerated fear over alleged apparitions is that critics do not understand their own prophetic role in the Church:

The faithful, who by Baptism are incorporated into Christ and integrated into the People of God, are made sharers in their particular way in the priestly, prophetic, and kingly office of Christ. —Catechism of the Catholic Church, 897

I have heard many Catholics operate in that prophetic office without their even knowing it. It doesn’t necessarily mean that they were predicting the future, rather, they were speaking the “now word” of God in a particular given moment.

On this point, it should be kept in mind that prophecy in the biblical sense does not mean to predict the future but to explain the will of God for the present, and therefore show the right path to take for the future. —Cardinal Ratzinger (POPE BENEDICT XVI), “Message of Fatima”, Theological Commentary, www.vatican.va

There is great power in this: the power of the Holy Spirit. In fact, it is in the use of this ordinary prophetic role where I have seen the most powerful graces come upon souls.

It is not only through the sacraments and the ministrations of the Church that the Holy Spirit makes holy the People, leads them and enriches them with his virtues. Allotting his gifts according as he wills (cf. 1 Cor. 12:11), he also distributes special graces among the faithful of every rank. By these gifts he makes them fit and ready to undertake various tasks and offices for the renewal and building up of the Church, as it is written, “the manifestation of the Spirit is given to everyone for profit” (1 Cor. 12:7). Whether these charisms be very remarkable or more simple and widely diffused, they are to be received with thanksgiving and consolation since they are fitting and useful for the needs of the Church. —Second Vatican Council, Lumen Gentium, 12

One of the reasons the Church is so anemic in some areas, especially the West, is that we do not operate in these gifts and charisms. In many churches, we are clueless as to what they even are. Thus, the People of God are not built up by the power of the Spirit operating in the gifts of prophecy, preaching, teaching, healing, etc. (Rom 12:6-8). It is a tragedy, and the fruits are everywhere. If the majority of churchgoers first of all understood the charisms of the Holy Spirit; and second, were docile to these gifts, allowing them to flow through themselves into word and action, they would not be nearly as afraid or critical of more extraordinary phenomena, such as apparitions.

…they help us to understand the signs of the times and to respond to them rightly in faith. —”Message of Fatima”, Theological Commentary, www.vatican.va

However, does a revelation only contain power and grace when it is approved by the local ordinary? According to the experience of the Church, it does not depend on this. In fact, it may be decades later, and long after the word was spoken or vision conveyed, that a ruling comes. The ruling itself is simply to say that the faithful may be free to believe in the revelation, and that it is compatible with the Catholic faith. If we try to wait for an official ruling, often the relevant and urgent message will be long gone. And given the volume of private revelations today, some will never have the benefit of an official investigation. The prudent approach is twofold:

AH… I WAS OKAY UNTIL YOU SAID “MEDJUGORJE”…

In every age the Church has received the charism of prophecy, which must be scrutinized but not scorned. —Cardinal Ratzinger (POPE BENEDICT XVI), Message of Fatima, Theological Commentary, www.vatican.va

Take a guess at which modern apparition banned priests from making pilgrimages to the apparition site? Fatima. It wasn’t approved until 1930, some 13 years after the apparitions ceased. Until then, local clergy were prohibited from participating in events there. Many of the approved apparitions in Church history were vehemently opposed by local Church authorities, including Lourdes (and remember St. Pio?). God permits these kinds of negative reactions, for whatever reason, within His divine providence.

Medjugorje is no different in this regard. It is surrounded by controversy as any alleged mystical phenomena ever has been. But the bottom line is this: the Vatican has made no definitive decision on Medjugorje. In a rare move, the authority over the apparitions was removed from the local bishop, and now lies directly in the hands of the Vatican. It is beyond my understanding why so many otherwise well-meaning Catholics cannot understand this current situation. They are more quick to believe a London tabloid than the easily attainable statements of Church authorities. And all too often, they fail to respect the freedom and dignity of those who wish to continue discerning the phenomenon.

One may refuse assent to private revelation without direct injury to Catholic Faith, as long as he does so, “modestly, not without reason, and without contempt.” —POPE BENEDICT XIV, Heroic Virtue, Vol. III, p. 397; Private Revelation: Discerning with the Church, p. 38

In necessary things unity, in undecided things freedom, and in all things charity. —St. Augustine

So, here they are, official statements straight from the source:

The supernatural character is not established; such were the words used by the former conference of bishops of Yugoslavia in Zadar in 1991… It has not been said that the supernatural character is substantially established. Furthermore, it has not been denied or discounted that the phenomena may be of a supernatural nature. There is no doubt that the Magisterium of the Church does not make a definite declaration while the extraordinary phenomena are going on in the form of apparitions or other means. —Cardinal Schonborn, Archbishop of Vienna, and main author of the Catechism of the Catholic Church; Medjugorje Gebetsakion, #50

You cannot say people cannot go there until it has been proven false. This has not been said, so anyone can go if they want. When Catholic faithful go anywhere, they are entitled to spiritual care, so the Church does not forbid priests to accompany lay-organized trips to Medjugorje in Bosnia-Herzegovina. —Dr. Navarro Valls, Spokesman of the Holy See, Catholic News Service, August 21, 1996

“…constat de non supernaturalitate of the apparitions or revelations in Medjugorje,” should be considered the expression of the personal conviction of the Bishop of Mostar which he has the right to express as Ordinary of the place, but which is and remains his personal opinion. — Congregation for the Doctrine of the Faith from then Secretary, ArchbishopTarcisio Bertone, May 26th, 1998

The point is not at all to say that Medjugorje is true or false. I am not competent in this area. It is simply to say that there is an apparition allegedly occurring which is bearing incredible fruit in terms of conversions and vocations. Its central message is wholly consistent with Fatima, Lourdes, and Rue de Bac. And most importantly, the Vatican has intervened several times to keep the doors open to continuing discernment of this apparition when it has had plenty of opportunities to shut it all down.

As for this website, until the Vatican rules on this apparition, I will carefully listen to what’s being said from Medjugorje and from other alleged private revelations, testing everything, and retaining what is good.

After all, that is what the divinely inspired Public Revelation of Sacred Scripture commands us to do.

Do not be afraid! —Pope John Paul II