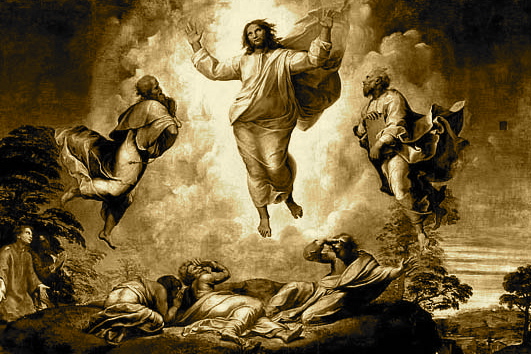 And behold, two men were conversing with him, Moses and Elijah, who appeared in glory and spoke of his exodus that he was going to accomplish in Jerusalem. (Luke 9:30-31)

WHERE TO FIX YOUR EYES

JESUS’s transfiguration on the mountain was preparation for His coming passion, death, resurrection, and ascension into Heaven. Or as the two prophets Moses and Elijah called it, "his exodus".

So too, it seems as though God is sending our generation prophets once again to prepare us for the coming trials of the Church. This has many a soul rattled; others prefer to ignore the signs around them and pretend nothing is coming at all.

But I think there is a balance, and it lies hidden in what the apostles Peter, James, and John witnessed on that mountain: Even though Jesus was being prepared for His passion, they saw Jesus not in a state of agony, but in glory.

…nothing compared with the glory to be revealed to us. (Romans 8:18)

What eye has not seen, and ear has not heard, and what has not entered the human heart, what God has prepared for those who love him. (1 Corinthians 2:9)

Rather, raise your thoughts and hearts to a glorified Bride—purified, joyful, holy, and completely at rest in the arms of her Beloved. This is our hope; this our faith; and this is the new day whose light is already dawning on the horizon of history.

Therefore, since we are surrounded by so great a cloud of witnesses, let us rid ourselves of every burden and sin that clings to us and persevere in running the race that lies before us while keeping our eyes fixed on Jesus, the leader and perfecter of faith. For the sake of the joy that lay before him he endured the cross, despising its shame, and has taken his seat at the right of the throne of God. (Hebrews 12:1-2)