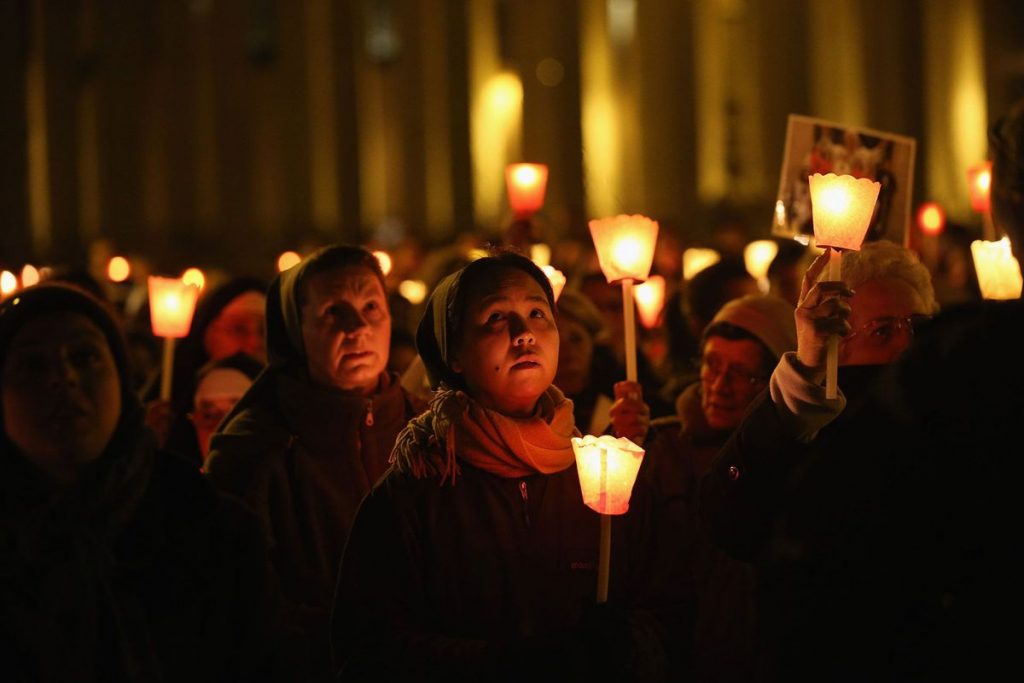 MEMORIAL OF THE PASSION OF SAINT JOHN THE BAPTIST

Dearest brothers and sisters… it’s been so long since I have had the opportunity to write a meditation—a “now word” for our times. As you know, we have been reeling here from that storm and all the other problems that cascaded during the past three months. It seems that these crises are not over, as we just learned that our roof has been rotting and needs to be replaced. Through it all, God has been crushing me in the crucible of my own brokenness, revealing the areas of my life that need to be purified. While it feels like punishment, it is actually preparation—for deeper union with Him. How exciting is that? Yet, it has been extremely painful to enter into the depths of self-knowledge… but I see the loving discipline of the Father through it all. In the weeks ahead, if God wills it, I will share what He is teaching me in hopes that some of you may also find encouragement and healing. With that, onward to today’s Now Word…

WHILE unable to write a meditation the past few months—until now—I have continued to follow the dramatic events unfolding throughout the world: the continued fracturing and polarization of families and nations; the rise of China; the beating of war drums between Russia, North Korea, and the United States; the move to unseat the American President and rise of socialism in the West; the growing censorship by social media and other institutions to silence moral truths; the rapid advance toward a cashless society and new economic order, and thus, central control of everyone and everything; and last, and most notably, the revelations of moral putrescence in the Catholic Church hierarchy that has led to a nearly shepherd-less flock at this hour.

Yes, everything I have written about, beginning some 13 years ago, is now coming to pass, including this: the Triumph of the Immaculate Heart of Mary. You see, this “woman clothed in the sun” is labouring to give birth to the whole body of Christ. What we are beginning to experience in the Church are the “hard” labour pains. And I hear again the words of St. Peter:

This is why I feel within my soul the urgent need to draw ever closer to this Woman. For she is the appointed one at this hour, the Ark given to us by God, to safeguard our passage through the Tribulation that we have entered. She is the one who will stand with us beneath the Cross (once again) where the Church will soon find herself, as she now enters the most painful hours of her own passion.

Before Christ’s second coming the Church must pass through a final trial that will shake the faith of many believers. The persecution that accompanies her pilgrimage on earth will unveil the “mystery of iniquity” in the form of a religious deception offering men an apparent solution to their problems at the price of apostasy from the truth. The supreme religious deception is that of the Antichrist, a pseudo-messianism by which man glorifies himself in place of God and of his Messiah come in the flesh… The Church will enter the glory of the kingdom only through this final Passover, when she will follow her Lord in his death and Resurrection. —Catechism of the Catholic Church, 675, 677

Many folks have written to me, asking me to comment on the unfolding crisis of sexual abuse and cover-up in the Catholic Church that is now reaching to its very summit. Here is my advice—and it is not my own:

Dear children! This is a time of grace. Little children, pray more, speak less and permit God to lead you on the way of conversion.  —August 25, 2018, Our Lady of Medjugorje, alleged message to Marija

It is probably worth it to repeat the Vatican’s official pastoral position on Medjugorje as of July 25th, 2018:

We have a great responsibility towards the whole world, because truly Medjugorje has become a place of prayer and conversion for the whole world. Accordingly, the Holy Father is concerned and sends me here to help the Franciscan priests to organize and to acknowledge this place as a source of grace for the whole world. —Archbishop Henryk Hoser, Papal Visitor assigned to oversee pastoral care of pilgrims; Feast of St. James, July 25th, 2018; MaryTV.tv

A source of grace—and simple wisdom: pray more, speak less. We are undoubtedly now living the words prophesied by Our Lady of Akita some 45 years ago:

The work of the devil will infiltrate even into the Church in such a way that one will see cardinals opposing cardinals, bishops against bishops… —Message given through an apparition to Sr. Agnes Sasagawa of Akita, Japan, October 13th, 1973

A war of words is beginning to erupt. The ugly political underbelly of the Church is being exposed as “collegiality” begins to disintegrate. Sides are being taken. Moral “high ground” is being staked out. Laymen are casting stones.

Words are powerful. So powerful, that Jesus is identified as “the Word made flesh.” I’m going to speak more in the days ahead about the power of judgments, which are tearing at the very seams of peace today. Watch out, brothers and sisters! Satan is setting the traps of division as we speak to destroy your marriages, families, and nations.

We need to pray more, speak less. For we have entered the vigil of the Day of the Lord. It is time to watch and pray. Speak less. But what of the controversy engulfing the Church?

The last thing we should do is panic, become depressed, or cave into despair. Remember what Jesus said to the Apostles as the waves crashed over their barque: “Why are you terrified? Do you not yet have faith?” (Mark 4:37-40) The Church is not finished, even though she will come to resemble Christ in the tomb. As Cardinal Ratzinger (Pope Benedict) said at the turn of the new millennium, we…

…must surrender to the mystery of the grain of mustard seed and not be so pretentious as to believe to immediately produce a large tree. We either live too much in the security of the already existing large tree or in the impatience of having a greater, more vital tree—instead, we must accept the mystery that the Church is at the same time a large tree and a very small grain. In the history of salvation it is always Good Friday and Easter Sunday at the same time…. —The New Evangelization, Building the Civilization of Love, n. 1

The Lord has begun The Shaking of the Church. Truly, we have become so utterly complacent, so rest-assured in our apologetics, so at ease in the Sunday to Sunday rhythms that neither challenge us nor convert the world, that it is time for a massive reset—one that will change the course of the world (see Rethinking the End Times). It is not the end, but the beginning of a new age.

A new age in which hope liberates us from the shallowness, apathy, and self-absorption which deaden our souls and poison our relationships. Dear young friends, the Lord is asking you to be prophets of this new age… —POPE BENEDICT XVI, Homily, World Youth Day, Sydney, Australia, July 20th, 2008

Thus, Our Lady is concerned foremost with your conversion at this hour—not Church crises, which have been inevitable. She’s absolutely right. She’s echoing the mind of Christ in His Church, whom she mirrors:

It is saints who renew the Church, not programs. It will be so again. The “institutional church” must, to a large degree, die. Clergy have by and large become administrators, not the preachers they were commissioned to be.[1]cf. Matt 28:18-20 The Church “exists in order to evangelize,” said Pope Paul VI. [2]Evangelii Nuntiandi, n. 14 We have lost our first love—to love God with all our hearts, soul, and strength—which leads us, naturally, to want to bring other souls to a saving knowledge of Jesus Christ. We’ve lost it—and the cost can be counted in souls. Thus, the Church needs to be disciplined in order to recover her true Joy.[3]cf. The Five Corrections

The deepest poverty is the inability of joy, the tediousness of a life considered absurd and contradictory. This poverty is widespread today, in very different forms in the materially rich as well as the poor countries. The inability of joy presupposes and produces the inability to love, produces jealousy, avarice—all defects that devastate the life of individuals and of the world. This is why we are in need of a new evangelization—if the art of living remains an unknown, nothing else works. But this art is not the object of a science—this art can only be communicated by [one] who has life—he who is the Gospel personified. —Cardinal Ratzinger (POPE BENEDICT), The New Evangelization, Building the Civilization of Love, n. 1

Creation awaits with eager expectation the revelation of the children of God… all creation is groaning in labor pains even until now… (Rom 8:19, 22)

Creation is awaiting the revelation of the final stage of the Church’s sanctification: a people imbued with the Divine Will. It is what John Paul II called a “coming new and divine holiness” for the Church. [4]cf. The Coming New and Divine Holiness In the end, we may not have our buildings anymore; the lace and golden chalices may disappear; the incense and candles may be snuffed out… but what will emerge is a Holy People who within themselves will give God His greatest glory, increasing even the glory of the Saints in Heaven.

We can begin to become that Holy People now if we resist the temptation to anger, finger-pointing, and rash judgement, and simply pray more, and speak less, making room not only for Divine Wisdom but the Divine One Himself.

May the Lord of peace himself give you peace
at all times and in every way. (Today’s Second Mass Reading)

The Shaking of the Church

Be Holy… in the Little Things

Dear Holy Father… He is Coming

To help put a new shelter over Mark’s family,
Click “Donate” below and add the note:
“For roof repairs”