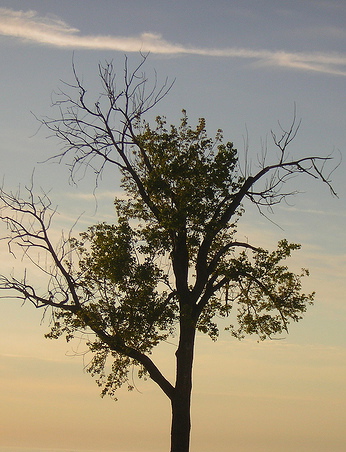 THE presumption of every generation is, of course, that they might be the generation which will see the fulfillment of biblical prophecy regarding the end times. The truth is, every generation does, to a certain degree.

Think of a tree. Even though the leaves come and go each year, the tree itself remains and continues to grow. As I write, leaves are budding, and leaves are falling…

The Church is like this tree, and its leaves—that is, each generation—come and go. God continues to care for this Tree, but over a long period of time, from our perspective. When the Lord speaks a prophetic word through His servants, it is directed toward the Tree, but not necessarily every leaf upon the Tree. That is, we must understand that the Tree grows slowly, developing and growing over many generations. If the tree has become sick, it is often because of a disease which infected the Tree perhaps centuries ago. Think of the French Revolution or the Protestant Reformation. Today, the Tree is now bearing, in full bloom, the rancid fruit of the division and rebellion of centuries past. (Note: I am not referring to the sincerity of genuine followers of Jesus, 500 years after the Reformation, but to the Protestantism that was born from a spirit of rebellion and grave doctrinal distortions of the meaning of the Incarnation—distortions which continue to this day.)

So even if, say, the Pope were to tell us that Friday of next week Jesus will perform a great miracle in the sun, many—no thousands of people would not witness it because that’s how many people die each day worldwide… tens of thousands, in fact.

The past century is full of riveting prophecies. Foremost, has been the unprecedented explosion of apparitions of the Blessed Virgin Mary. While no doubt some of these apparitions are Satan appearing as “an angel of light,” many are the apparitions which have been approved by local bishops. And in these extraordinary graces sent by heaven, Mary brings a consistent word of invitation, penance, warning, and Mercy.

In addition, many mystics and saints have received visions and inner locutions, again proliferating in our times. We may tire of these messages and feel they’re just more of the same… But here is the point:  consider how long it takes for us to convert! How many seasons it takes a tree to grow or to crumble into the earth! Similarly, it sometimes takes many years, perhaps generations before cultures begin to turn the tide.

But do not ignore this one fact, beloved, that with the Lord one day is like a thousand years and a thousand years like one day. The Lord does not delay his promise, as some regard “delay,” but he is patient with you, not wishing that any should perish but that all should come to repentance. (2 Pet 3:8-9)

Pope John Paul II described the current generation as a “culture of death.” His words are more than true as we watch everything from extreme and gruesome violence erupting within families and entire nations, to the presumptuous and arrogant experimentation with human embryos and genetics, to the silent and tragic murder of the elderly, sick, and unborn. It was this same Pope who prophesied words which are rapidly being fulfilled:

We are now standing in the face of the greatest historical confrontation humanity has gone through. I do not think that wide circles of the American society or wide circles of the Christian community realize this fully. We are now facing the final confrontation between the Church and the anti-Church, of the Gospel and the anti-Gospel. This confrontation lies within the plans of divine providence. It is a trial which the whole Church . . . must take up.  —Cardinal Karol Wojtyla (John Paul II), reprinted November 9, 1978, issue of The Wall Street Journal from a 1976 speech to the American Bishops

How many leaves will bud and then fall before this confrontation culminates? Only God truly knows. But if a culture sows in death it will reap death. Perhaps this is the greatest sign of the time before us, that our culture has embraced death as a virtue, and that this culture of death has spread world-wide. It is perhaps the universality of the current apostasy which has brought down the very Mother of God and which should cause us to ponder the words of Christ in Matthew 24 more seriously.

There is a sense of urgency in many hearts, coupled with an increase in extraordinary signs in nature as well as the beginnings of an intensified world-wide persecution of the Church. The signs look very much like the Gospel warnings. At least that’s what Pope Paul VI said:

But again, that was over 40 years ago. And since then, many leaves have fallen and blown away with the winds of time.

And it is now almost 40 years since this same Pope issued warnings through his encyclical Humanae Vitae about the dangers which would befall humanity if birth control were embraced.

I was born that same year, if only to tell you today that he was right.

Forty years I endured that generation. I said, “They are a people whose hearts go astray and they do not know my ways.” So I swore in my anger, “They shall not enter into my rest. (Psalm 95)