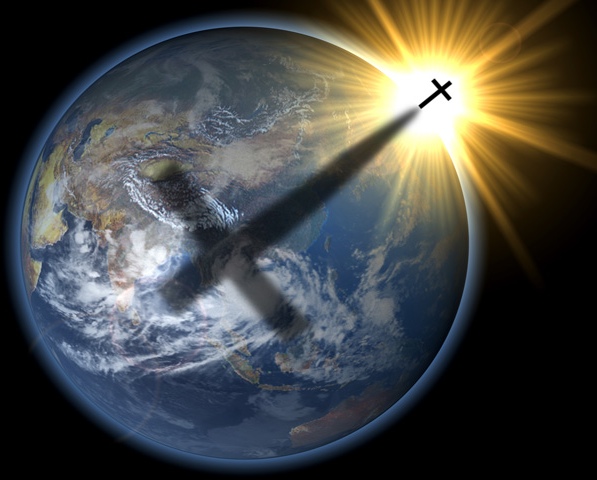 WHY now? I mean, why has the Lord inspired me, after eight years, to begin this new column called “the Now Word”, reflections on the daily Mass readings? I believe it is because the readings are speaking to us directly, rhythmically, as biblical events unfold now in real time. I don’t mean to be presumptuous when I say that. But after eight years of writing to you about coming events, as summarized in The Seven Seals of Revolution, we are now seeing them unfold in real time. (I once told my spiritual director that I was terrified to write something that may be wrong. And he replied, “Well, you’re already a fool for Christ. If you’re wrong, you’ll just be a fool for Christ—with egg on your face.”)

And so, the Lord wants to reassure us. Because it can be terrifying to see the world spinning wildly, rapidly out of control. As I’ve said before, it is no longer necessary to warn people about that which is now on their daily news (unless, of course, you follow the mainstream media; then you might have a lot of catching up to do). The Storm is upon us. But Jesus, is always, always in the boat of His people, in the Barque of Peter.

Suddenly a violent storm came up on the sea, so that the boat was being swamped by waves; but [Jesus] was asleep… (Tuesday’s Gospel)

The bottom line is that we live in a world that is swiftly closing in on Christians; quickly dissolving liberty, evaporating peace, and turning the moral order literally upside down. It seems, indeed, like Jesus is asleep, that the Lord’s creation is slipping out of His fingers…

“Lord, save us! We are perishing!” He said to them, “Why are you terrifed, O you of little faith?”

Really, why are we terrifed? Hasn’t the Lord been telling us about these things for decades? Yes, I too am tempted to be in denial. Or do you think I am without feelings, dreams, and visions of seeing my eight children grow in freedom without the threat of war, famine, plague, and persecution? My God, our governments want to teach our children that sodomy is the same as the sacramental union of a man and woman. Do you think the Lord will stand by as an entire generation of youth has no chance as their innocence is ripped away from them?

And so, now we see that Our Blessed Mother’s apparitions should have been taken seriously all along; that those seers and prophets like Fr. Gobbi and others who “got their dates wrong” are more likely in the category of Jonah—who also got his dates wrong—because the Lord, in His mercy, has delayed things as long as possible.

The Lord God does nothing without revealing his plan to his servants, the prophets. (Tuesday’s first reading)

Did you catch that— “his plan”? Not Satan’s plan, His plan, as seen throughout this week’s readings:

Seek good and not evil that you may live… Hear this, you who trample upon the needy and destroy the poor of the land… On that day, says the Lord God, I will make the sun set at midday and cover the earth with darkness in broad daylight. I will turn your feasts into mourning… I will bring about the restoration of my people Israel; they shall rebuild and inhabit their ruined cities… Kindness and truth shall meet, justice and peace shall kiss. Truth shall spring out of the earth, and justice shall look down from heaven.

And so, I hear very clearly this week: you and I, dear child of God, are called to live apart from this world.

You are no longer strangers and sojourners, but you are fellow citizens with the holy ones and members of the household of God… (Thursday’s first reading)

I recall Jesus’ words from Luke that spoke of our times as being “as it was in the days of Lot: they were eating, drinking, buying, selling, planting, building; on the day when Lot left Sodom, fire and brimstone rained from the sky to destroy them all. So it will be on the day the Son of Man is revealed.” [1]cf. Luke 17:28-30 You see, people think the “end times” look like some Hollywood movie; but really, according to Jesus, they look quite “normal.” That’s the deception. Not that eating, drinking, buying, selling, planting, or building are immoral, but that people are completely occupied with these, rather than paying attention to the signs of the times. We say,

“Lord, let me go first and bury my father.” But Jesus answered him, “Follow me, and let the dead bury their dead.” (Tuesday’s Gospel)

One such woman who has been paying attention to the signs is a friend of mine from the United States. She is a Catholic convert whom I have quoted both here and in my book regarding a beautiful vision she had of Our Blessed Mother. She recently received another powerful vision that she shared with me last week.

She had been struggling this past month with the role of Mary in our times, and so prayed for a confirmation. The Lord told her that she would see a miracle and that she would know that it was through Mary’s intercession. Last Saturday, not realizing until later that it was the feast of the Immaculate Heart, this is what happened:

I took a short walk. While standing in the driveway I glanced up at the sun…I saw it pulsate and bounce up and down and side to side. I walked over to the grass and sat down to watch. As it continued to pulsate and emit colors, I saw two black clouds to the left side of the sun, one was in the form of a serpent the other a black horse. The Scriptures from Revelation (a woman clothed with the sun, the dragon/serpent, and the verse about the black horse came to mind as I watched the sun and saw the figures beside it). My husband came walking up to me to see what was wrong. I ask him to look up at the sun. He said he couldn’t look at it because it was too bright and for me not to either because it would injure my eyes…

When I came inside I looked up the Bibles verse about the black horse because I couldn’t remember what the black horse represented. I read in Revelation 6: “When he opened the third seal, I heard the third living creature say, “Come!” And I saw a black horse, and it’s rider had a balance in his hand; and I heard what seemed to be a voice in the midst of the four living creatures saying, “A quart of wheat for a denarius, and three quarts of barley for a denarius; but do not harm oil and wine!”

This seal speaks of essentially hyper-inflation due to, obviously, some economic catastrophe. As I wrote in 2014 and the Rising Beast, many economists are openly predicting such an event in the very near future. Especially as we see the second seal—the sword of war—rising against the peace of the entire world.

And Jesus says, “Why are you terrified, O you of little faith?” We need to trust Him. And don’t fret if this feels like a fight to trust, for:

Blessed are those who have not seen and have believed. (Thursday’s Gospel)

One of the first words I received in this writing ministry is that there would be “exiles” —a mass exodus of peoples being displaced by disasters. Now, we can be afraid about this, or we can enter into Monday’s Gospel:

“Teacher, I will follow you wherever you go.” Jesus answered him, “Foxes have dens and birds of the sky have nests, but the Son of Man has nowhere to rest his head.”

Do I sound crazy? Ask the Christians in Africa, the Middle East, Haiti or Lousiana if that sounds crazy. For you see, the plan of God is this: that the whole world be allowed to reap what it desires to sow in sin in order that His mercy may be made manifest to every single soul—before the planet is purified. And if this means losing everything so as to save our souls, then that’s the way it must be.

Those who are well do not need a physician, but the sick do… I desire mercy…. (Friday’s Gospel)

This is why I have been telling you about Our Lady, The New Gideon, and her plan to raise a remnant army who will be divine instruments of God’s mercy, healing, and power. And what is this? You and I are alive to see this? To participate in it? Yes, I believe it. Or maybe it’s our children. I don’t care. All I want to say today is “Yes Lord! Fiat! May your will be done. But you see, Lord, my will is sick, and so I need you, Great Physician! Heal my heart! Heal my mind! Heal my body, so driven by compulsion, so that I will be driven by your Spirit.”

God is with us in this Storm. It is unfolding now in real time. So is His merciful plan. So pay attention. Resist despair. Fight temptation. Pray, and pray often, and He will strengthen and console you.

He’s in your boat.

To also receive The Now Word,
Mark’s meditations on the Mass readings,
click on the banner below to subscribe.
Your email will not be shared with anyone.