THOUGH the Lord has been mostly silent in my own heart the past few months, this writing below and the word “Revolution!” remains strong, as though it is being spoken for the first time. I have decided to re-post this writing, and invite you to freely spread it to family and friends. We are seeing the beginnings of this Revolution already in the United States.

The Lord has begun to speak words of preparation again in the past few days. And so, I will write these and share them with you as the Spirit unfolds them. This is a time of preparation, a time of prayer. Don’t forget this! May you remain deeply rooted in the love of Christ:

For this reason I kneel before the Father, from whom every family in heaven and on earth is named, that he may grant you in accord with the riches of his glory to be strengthened with power through his Spirit in the inner self, and that Christ may dwell in your hearts through faith; that you, rooted and grounded in love, may have strength to comprehend with all the holy ones what is the breadth and length and height and depth, and to know the love of Christ that surpasses knowledge, so that you may be filled with all the fullness of God. (Eph 3:14-19) 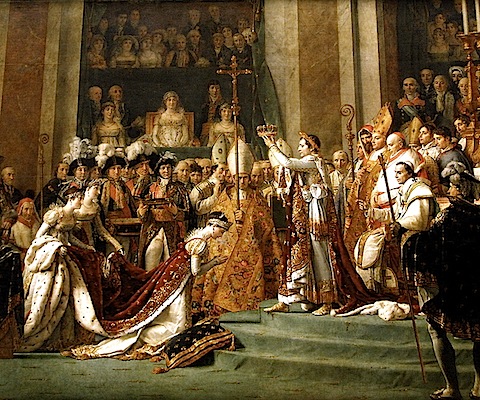 A NEW word has been on my heart the past couple months:

I have already introduced you to a priest-friend in New Boston, Michigan where the Divine Mercy message first began to spread in North America from his very parish. He receives visits from the Holy Souls in Purgatory each night in vivid dreams. I recounted this past December what he heard when the late Fr. John Hardon appeared to him in a special dream:

This humble priest has also received recent visits from the Little Flower, St. Thérèse de Liseux, who has given a message, which I believe is for the whole Church. Fr. does not publicize these things, but confided them to me personally. With his permission, I am publishing them here.

WARNING FROM THE PAST

In April, 2008, the French saint appeared in a dream wearing a dress for her first Communion and led him toward the church. However, upon reaching the door, he was barred from entering. She turned to him and said:

Immediately, Fr. understood that she was referring to the French Revolution and the sudden persecution of the Church which burst out. He saw in his heart that priests will be forced into offering secret Masses in homes, barns, and remote areas. Fr. also understood that several clergy were going to compromise their faith and form a “pseudo-church” (see In the Name of Jesus — Part II ).

Be careful to preserve your faith, because in the future the Church in the U.S.A will be separated from Rome. —St. Leopold Mandic (1866-1942 A.D.), Antichrist and the End Times, Fr. Joseph Iannuzzi, p.27

And then recently, in January 2009, Fr. audibly heard St. Therese repeat her message with more urgency:

“It will happen so fast,” he told me, “that no one will really be prepared. People think this can’t happen in America. But it will, and soon.”

One morning in December of 2004, I awoke before the rest of my family while we were on a concert tour. A voice spoke within my heart saying that a spiritual earthquake occurred 200 years ago in what is known as the French Revolution. This unleashed a moral tsunami which raced through the world and brought its devastation to a peak around 2005 [see my writing Persecution! ( Moral Tsunami) ]. That wave is now receding and leaving in its wake chaos.

To be honest, I didn’t even know what the French Revolution was. I do now. There was a period called “The Enlightenment” in which philosophical principles began to emerge, which viewed the world entirely from a perspective of human reason, rather than reason enlightened by faith. This culminated during the French Revolution with a violent rejection of religion and a formal split between the Church and State. Churches were ransacked and many priests and religious were put to death. The calendar was altered and some Feast days were outlawed, including Sunday. Napoleon, who defeated the papal army, took the Holy Father prisoner and in a moment of supreme arrogance, crowned himself emperor.

Today, something similar is taking place, but this time on a global scale.

The moral tsunami which erupted 200 years ago has a name: the “culture of death.” Its religion is “moral relativism.” In all truth, it has destroyed a great deal of the foundation of the Church throughout the world except for a remnant of the Rock. As this wave now heads back out to sea, Satan wants to take the Church with it. The “dragon”, who inspired the philosophical underpinnings of the French Revolution, intends to finish the job: not just a further widening of division between Church and State, but an end to the Church altogether.

The serpent spewed a torrent of water out of his mouth after the woman to sweep her away with the current. (Rev 12:15)

As the wave started in Europe and finally reached its pinnacle in North America, it is now receding from the Americas until it returns again to Europe, sweeping away every obstacle in its path to allow the rise of a “beast,” a global Super-State, a New World Order.

Throughout the world, there is a clamor for change. That desire was evident in November, in an event that could become both a symbol of this need for change and a real catalyst for that change. Given the special role the United States continues to play in the world, the election of Barack Obama could have consequences that go far beyond that country. If current ideas for reforming the world’s financial and economic institutions are consistently implemented, that would suggest we are finally beginning to understand the importance of global governance.—Former Soviet President Michael Gorbachev (presently President of the International Foundation for Socio-Economic and Political Studies in Moscow), January 1, 2009, International Herald Tribune

Of course, the greatest obstacle is the Catholic Church and her moral teachings, especially on marriage and the dignity of the human person.

A concrete sign of the beginnings of this Revolution came about suddenly on March 9th, 2009 in the American state of Connecticut in a “shot” over the bow of the Church. A legislative Bill was proposed to interfere directly in the operations of the Catholic Church by forcing bishops and priests to become a separate entity from the parish, instead placing in authority an elected board (a similar effort to democratize the Church was made in France with the The Law of the Civil Constitution of the Clergy [1790 A.D.] which forced both bishops and priests to be elected by the people.) Connecticut Catholic leaders felt it was a direct counter-attack to the Church’s efforts to prevent same-sex “marriage” in the state. In a rousing speech, the Supreme Knight of the Knights of Columbus warned:

The lesson of the nineteenth century is that the power to impose structures that grant or take away authority of Church leaders at the discretion and will of government officials is nothing less than the power to intimidate and the power to destroy. —Supreme Knight Carl A. Anderson, rally at the Connectitcut State Capitol, March 11, 2009

The Fifth Seal of Revelation is persecution, which I believe will begin on various regional levels and will set the stage for the Great Persecution of the Church when the beast is given a mouth: when lawlessness culminates in the Beast, the “lawless one.”

He shall speak against the Most High and oppress the holy ones of the Most high, thinking to change the feast days and the law. They shall be handed over to him for a year, two years, and a half-year. (Dan 7:25)

But remember this, dear brothers and sisters: when this spiritual earthquake shook the heavens two centuries ago, our Blessed Mother also appeared around that time.

These present times are nothing more than the final thrashings of the tail of a serpent who feels the heel of a Woman about to crush his head.

But when the court is convened, and his power is taken away by the final and absolute destruction, then the kingship and dominion and majesty of all the kingdoms under the heavens shall be given to the holy people of the Most High, whose kingdom shall be everlasting: all dominions shall serve and obey him. (Dan 7:25-27)