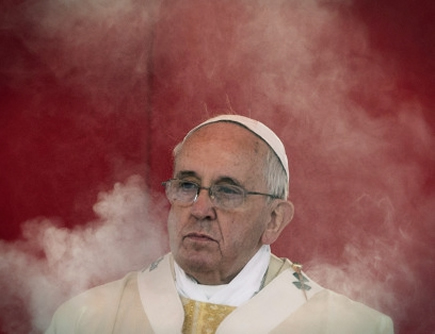 I have returned from Mexico, and am eager to share with you the powerful experience and words that came to me in prayer. But first, to address the concerns noted in a few letters this past month…

ONE of the most moving and perhaps relatable texts in the Gospels is the moment when Jesus fills Peter’s nets to overflowing. So moved by the Lord’s power and presence, Peter falls to his knees and declares,

Depart from me, Lord, for I am a sinful man. (Yesterday’s Gospel)

Who among us who has genuinely begun the journey into self-knowledge has not uttered these words themselves? Part of the liberating message of the Gospel is not only the truths of Jesus’ moral teachings, but the truth of who I am, and who I’m not in light of them. For Peter, true self-knowledge seems to begin at this moment and grows the more he walks with Jesus. In fact, Peter is one of the few Apostles whose foibles and follies are put on display throughout the Gospel narrative. It is a reminder to us that the rock on which the Church is built is a rock precisely because he is divinely supported.

…upon this rock I will build my church, and the gates of the netherworld shall not prevail against it. I will give you the keys to the kingdom of heaven… I have prayed for you that your faith may not fail… (Matt 16:18; Luke 22:32)

And that is precisely the point of why I have defended the office of Peter over the course of three pontificates now: it’s an office established, supported, and guided by Jesus Christ Himself.  This is not to say that “Peter” cannot be a weak, “sinful man”, as most of us are. As history has shown from the beginning, the papacy has been occupied by men who have scandalized that office. In fact, Peter’s “theology” of the Messiah was wrong from the start, right from the moment he received the Keys:

From that time on, Jesus began to show his disciples that he must go to Jerusalem and suffer greatly from the elders, the chief priests, and the scribes, and be killed and on the third day be raised. Then Peter took him aside and began to rebuke him, “God forbid, Lord! No such thing shall ever happen to you.” He turned and said to Peter, “Get behind me, Satan! You are an obstacle to me. You are thinking not as God does, but as human beings do.” (Matt 16:21-23)

That is to say that even “the rock” can get stuck in worldly thinking. Indeed, the history of the papacy is scarred by men who were greedy, fathered children, and were more concerned with power than the proclamation of the Gospel. As for Peter, even Paul rebuked him “because he clearly was wrong.” [1]Gal 2:11 Paul…

…saw that they were not on the right road in line with the truth of the gospel… (Gal 2:14)

Turns out, Peter was trying to be “welcoming” one way with the Jews and another with the Gentiles, but in such a way that he was “not on the right road in line with the gospel.”

Fast forward to 2016. Once again, many are raising the alarm that some of the Pope’s statements are confusing and ambiguous. That Amoris Laetitia is in contradiction to John Paul II’s Veritatis Splendor. That Francis’ concept of “welcoming” is inconsistent with his predecessors. And from what I have read (in various publications from several theologians and bishops), it appears that Pope Francis’ recent document may indeed require clarifications if not corrections. No one, a pope included, has the authority to alter the Sacred Tradition that has been handed onto us for 2000 years. As Jesus said in today’s Gospel,

No one tears a piece from a new cloak to patch an old one. Otherwise, he will tear the new… And no one who has been drinking old wine desires new, for he says, “The old is good.”

The “old cloth” of Sacred Tradition cannot be merged with novel materials contrary to the natural moral law; the old wine is good until the end of time.

Now, that is one thing. But the declarations by some “conservative” Catholics that Pope Francis is a False Prophet and heretic who is deliberately destroying the Church is another. Some of these Catholics have scolded me for simply quoting Pope Francis at all, even when those quotes are doctrinally sound and when I am clearly teaching in accord with Sacred Tradition.

Two tragic things have happened to these individuals, in my opinion. One is that they have lost faith in Matthew 16 and in Christ’s promise that, despite the weakness and even sinfulness of “Peter”, the gates of hell will not prevail. They are convinced that Pope Francis can and will destroy the Church. The second tragedy is that they have set themselves up as judges, determining that everything good the Pope says is a duplicitous lie, and everything ambiguous or confusing is intentional. They trust more in obscure private revelation or Protestant theories that the Pope is some kind of antichrist than they do in the promises of Jesus Christ. Therefore, they frequently write me to declare that I am blind, oblivious, and in danger. They want me, instead, to use this apostolate to attack the Holy Father’s perceived shortcomings, flaws and failures.

So let me make it absolutely clear: I will never use this blog to create, lead or foment a schism. I am and always will be a Roman Catholic, in communion with the Vicar of Christ. And I will continue to lead my readership to remain in communion with the Holy Father, to remain upon the rock, even if that means we may arrive at a “Peter and Paul” moment when the Pope needs to be respectfully challenged and criticized. [2]“According to the knowledge, competence, and prestige which [the laity] possess, they have the right and even at times the duty to manifest to the sacred pastors their opinion on matters which pertain to the good of the Church and to make their opinion known to the rest of the Christian faithful, without prejudice to the integrity of faith and morals, with reverence toward their pastors, and attentive to common advantage and the dignity of persons.” —Code of Canon Law, Canon 212 §3 Those who feel I am out to lunch are free to cease their support and unsubscribe. For my part, I will continue on the same path I have been since I began my ministry some 25 years ago: to remain a faithful son in the only Church that Christ established, the Catholic Church. Part of that faithfulness is to support by my prayers and filial love the shepherds whom Jesus has placed over us.

As for those who wish to judge the motives of Pope Francis, St. Paul might say:

I do not even pass judgment on myself; I am not conscious of anything against me, but I do not thereby stand acquitted; the one who judges me is the Lord. Therefore, do not make any judgment before the appointed time, until the Lord comes, for he will bring to light what is hidden in darkness and will manifest the motives of our hearts, and then everyone will receive praise from God. (Today’s first reading)

Brothers and sisters, I am moving on in these writings to focus on Our Lady’s plan as she continues to reveal it in this hour. Everything else is a distraction as far as I am concerned.  There is much hope, grace, and power that Christ desires to pour upon His Bride. So surrender your fears to Him and lean on His promises, because He is faithful and true.

Commit to the LORD your way; trust in him, and he will act. He will make justice dawn for you like the light; bright as the noonday shall be your vindication. (Today’s Psalm)

As we head into the Fall, your support is
needed for this ministry. Bless you!

This Fall, Mark will be joining Sr. Ann Shields
and Anthony Mullen at the…

National Conference of the

of the Immaculate Heart of Mary 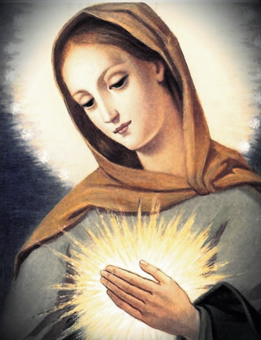