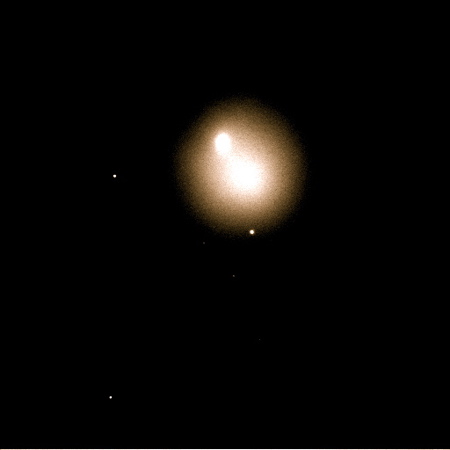 Two days ago, the words “THE STORM HAS ARRIVED” came to mind. Since publishing the writing below on November 5th, 2007, a world food shortage crisis has developed; the world economy has become extremely fragile; the alarm has been raised over new incurable “superbugs“; major storms are pummeling the world; powerful earthquakes are appearing or re-appearing suddenly in odd places with growing frequency; and Russia and China continue to make headlines as they flex their military muscle, raising more concerns over “wars and rumors of wars.” Perhaps we don’t feel these events quite as intensely yet in North America because of our “wealth and comfort buffer,” but God is speaking to the whole world, not just the West. We are beginning to experience, as a global community, common signs.

Perhaps the greatest sign is that which is rising in the hearts of many I speak to. The sense of “imminence” of “something” has perhaps never been greater. These events will continue, and increase in intensity. As a hurricane is weak in the beginning, but becomes strong enough that one has to take “safe measures”, so too are we at a point where I believe we are being told to take “safe measures.”  When a woman begins to experience intense labor pains, she goes to the hospital. The safe measures I am concerned with are those of the soul. Are you prepared? Are you in a state of grace? Are you listening carefully through prayer to the still small voice in your heart directing you for these times?

I also recommend a re-reading of The Prodigal Hour. Again, it was written prior to my knowledge of a food crisis. And I wrote this prologue, prior to today’s earthquake in China. We pray for them, and for the victims of the many natural and man-made disasters around the globe.

The times have arrived. The winds of change are strong, and beginning to blow  with hurricane force. Fix your eyes on Christ, for the Eye of the Storm is coming…

Nation will rise against nation, and kingdom against kingdom. There will be powerful earthquakes, famines, and plagues from place to place; and awesome sights and mighty signs will come from the sky. (Luke 21:10-11)

THE“word” that we have arrived at the threshold of The Day of the Lord came to me the evening after I wrote One Word. That night, October 23rd, 2007, a comet suddenly “exploded” in the constellation of Perseus (it is now visible to the naked eye). Immediately my heart leapt when I read this in the news; I felt strongly that this was significant and a sign.

The next day as I prepared to write The Day of the Lord, another sign broke out—oppression, discord, and a bombardment of distractions that pummeled me like a meteor shower for 10 days, such that it was nearly impossible to write. That too, I knew, was a sign.

After sending you this important word on The Day of the Lord, I felt my attention drawn immediately to this comet called “17p/Holmes.” And that’s when I read that it was spotted in Perseus, near the brightest star called Alpha Persei.

Perseus is the Greek hero known as “The Champion” or “The Rescuer” who slew the monster Medusa with a sword.  He was riding upon a white horse called Pegasus. I recently wrote that I believe we are on the verge of seeing the prophetic element of Revelation for our times being fulfilled, that is, the breaking of the Seals of the Apocalypse which usher in a purification of the world through war, famine, and persecution etc. (see The Breaking of the Seals). The First Seal is a rider upon a white horse.

I looked, and there was a white horse, and its rider had a bow. He was given a crown, and he rode forth victorious to further his victories. (Rev 6:2)

Pope Pius XII identifies the rider as Jesus who suddenly appears in the Heavens.

Then I saw the heavens opened,and there was a white horse; its rider was (called) “Faithful and True.” He judges and wages war in righteousness…  (Rev 19:11)

I believe the appearance of this comet is a sign to prepare your heart for the appearance of the rider upon the white horse in the “illumination of conscience.” I have explained what this event is in The Eye of the Storm. It is a mini-judgment in which every human being on the earth will see themselves as God sees them (perhaps triggered by seeing the crucified Christ appear in the sky much the way St. Faustina did.) It will do much to convert many souls. But it will also bring about a hardening upon the most proud and unrepentant who survive it.

At the moment I began to write this meditation, while sitting in a truck stop, a song came on the speakers in the restaurant. It’s a song I have heard a hundred times before. But this time, I listened to the lyrics.

I see the bad moon arising.
I see trouble on the way.
I see earthquakes and lightnin’.
I see bad times today…

I hear hurricanes a-blowing.
I know the end is coming soon.
I fear rivers over flowing.
I hear the voice of rage and ruin…

Hope you got your things together.
Hope you are quite prepared to die.
Looks like we’re in for nasty weather.
One eye is taken for an eye.

Of course, these words don’t provide the hope which Christ offers in this present darkness.  Nonetheless… a coincidence? Perhaps.

And so, the message is the same as it was exactly two years ago when I began writing these words: Prepare!

I know some of my readers are afraid or hesitant to read my writings because they speak of difficult times which are approaching if there is no repentance. But the warning is not the whole message! It is not the final word! The crux is that you will be safe if you place your trust in the Mercy and Love of Jesus. You will be safe if you entrust yourself to Mary by consecrating your life to her. You will find refuge in the coming storms if you open your heart to God and allow Him to guide you through them. Perhaps we should analyze less and pray more!

Through our prayers and fasting, we can help the Lord save many souls and even lessen the chastisements which seem inevitable due to the terrible sin which continues to prevail in this generation. Several people have said to me lately that they feel a strong urge to intercede for sinners. That too is a sign.

Do not be afraid. The Lord has given us glimpses of the peace and even joy which will sustain those who are in the Ark of Mary’s heart during these tribulations (read I Will Be Your Refuge). So you must trust and “rejoice always” as St. Paul says. But waste no time. Turn off the noise around you, examine your heart, confess any sin, and pray… pray, pray, pray. Place yourself in the Bastion, the fortress of the Rock, who is Christ. This is the time to watch, pray, and wait. If you do, you will know what to do when the time comes, for you will be able to hear it in the stillness of your heart.

Jesus is coming in a special way. Not His ultimate and final glorious return in the flesh—not yet. But in a way which will change the course of history. Forever.