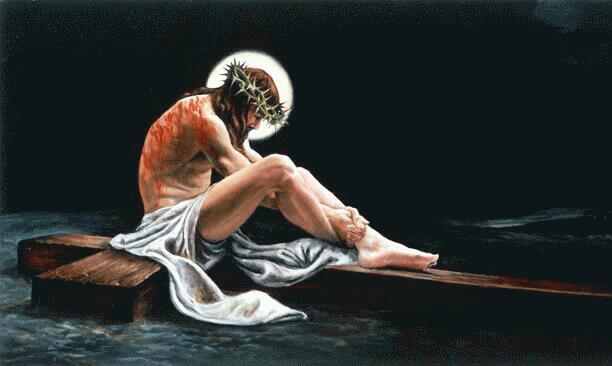 The Man of Sorrows, by Matthew Brooks

During an outdoor Mass, he looked up at the priest during the Consecration. To his utter astonishment, he no longer saw the priest anymore, but rather, Jesus standing in his place! He could hear the priest’s voice, but he saw Christ.

The experience of this was so profound that he held it inside, pondering it for two weeks. Finally, he had to speak about it. He went to the rector’s house and knocked on his door. When the rector answered, he took one look at the seminarian and said, “So, you saw Him too?”

We have a simple, yet profound saying in the Catholic Church: in persona Christi — in the person of Christ.

In the ecclesial service of the ordained minister, it is Christ himself who is present to his Church as Head of his Body, Shepherd of his flock, high priest of the redemptive sacrifice, Teacher of Truth. These servants are chosen and consecrated by the sacrament of Holy Orders by which the Holy Spirit enables them to act in the person of Christ the head for the service of all the members of the Church. The ordained minister is, as it were, an “icon” of Christ the priest. —Catechism of the Catholic Church, n. 1548, 1142

The priest is more than a simple representative. He is a true living symbol and conduit of Christ. Through the bishop and his co-workers — the priests in his care — the People of God seek the shepherding of Christ. They look to them for guidance, spiritual food, and that power which Christ conferred upon them to forgive sins and make His Body present in the Sacrifice of the Mass. The flock are also looking for the imitation of Christ in their priest. And what did Christ, the Shepherd, do for His sheep?

As I write this, the faces of those hundreds of priests, bishops, and cardinals whom I have met on my journeys are passing before my eyes. And I say to myself, “Who am I to write these things?” What things?

That the hour has come for priests and bishops to lay down their lives for their sheep.

This hour has always been with the Church. But in times of peace, it has been more metaphorical — the “white” martyrdom of dying to self. But now the times have arrived when clergy will incur a greater personal cost for being a “Teacher of the Truth.” Persecution. Prosecution. In some places, martyrdom. The days of compromise are over. The days of choice are here. That which is built on sand will crumble.

Those who challenge this new paganism are faced with a difficult option. Either they conform to this philosophy or they are faced with the prospect of martyrdom. —Fr. John Hardon; How to Be a Loyal Catholic Today? By Being Loyal to the Bishop of Rome; article from therealpresence.org

As one Protestant commentator put it, “Those who choose to be married to the spirit of the world in this age, will be divorced in the next.”

Yes, if priests are to be icons of the Great Shepherd, they must imitate Him: He was obedient and loyal to the Father to the very end. For a priest, then, loyalty to the Heavenly Father is also expressed in loyalty to the Holy Father, the Pope, who is the Vicar of Christ (and Christ is the image of the Father.) But Christ also loved and served and expended Himself for the sheep in this obedience: He loved His own “to the end.”[1]cf. John 13:1 He did not please men, but God. And in pleasing God, He served men.

Ah! The great poison of our day: the desire to please, to be liked and approved by our fellow man. Is this not the golden idol that the modern Church has erected in its heart? I have often heard it said that the Church appears more like an NGO (non-governmental organization) than a mystical Body these days. What sets us apart from the world? Lately, not a lot. Oh, how we need living saints, not programs!

Among the abuses that came after Vatican II was in some places the removal from the sanctuary of the symbol of the Crucified Jesus and the de-emphasis of the Sacrifice of the Mass. Yes, Christ’s crucifixion has become a scandal even to His own. We have removed the sword of the Spirit — truth — and waved in its stead the shiny feather of “tolerance.” But as I wrote recently, we have been called to The Bastion to prepare for battle. Those who wish to brandish the feather of compromise will be caught with it in the winds of deception, and carried away.

What of the layman? He too is part of the royal priesthood of Christ, albeit in a different way than those anointed with the special character of Christ in Holy Orders. As such, the lay-man is called to lay-down his life for others in whatever vocation he finds himself. And he or she must also be loyal to Christ by being obedient to the shepherd — one’s priest, bishop, and the Holy Father, despite whatever personal foibles and flaws. The cost of this obedience to Christ is also great. Perhaps it will be more, for often the layman’s family will suffer along with him for the sake of the Gospel.

I will follow Your will insofar as You will permit me to do so through Your representative. O my Jesus, I give priority to the voice of the Church over the voice with which You speak to me. —St Faustina, Divine Mercy in My Soul, Diary, 497

We must all count the cost if we are to serve Jesus faithfully. We must realize what He is truly asking of us, and then simply decide if we will do it. How few choose the narrow road — and about this, Our Lord was very blunt:

Whoever wishes to save his life will lose it, but whoever loses his life for my sake will save it. (Luke 9:24)

He is asking us to be His hands and His feet in the world. To be like stars shining ever brighter in the growing darkness, holding fast to the truth.

[Jesus] is lifted up and resplendent among the nations through the lives of the those who live virtuously in observance of the commandments. —Maximus the Confessor; Liturgy of the Hours, Vol IV, p. 386

But weren’t His hands and feet also nailed to a tree? Yes, if you are to live virtuously and loyally the commandments of Christ, you can expect to be persecuted and even hated. Especially if you are a priest. That is the cost we face in ever greater degrees today, not because the standard of the Gospel has been raised (it has always been the same), but because to live it authentically is increasingly met with hostility.

Indeed all who desire to live a godly life in Christ Jesus will be persecuted. (2 Tim 3:12)

We are entering more deeply into the final confrontation of the Gospel and the anti-Gospel. There is something of a frenzied attack on the Church these days, an unrestrained blasphemy of all that is sacred and holy. But just as Christ was betrayed by His own, we too must expect that some of the fiercest persecution may come from within our own parishes. For many churches today have succumbed to the spirit of the world to such a degree that those who actually live their faith seriously become a sign of contradiction.

Blessed are those who are persecuted for righteousness’ sake, for theirs is the kingdom of heaven. Blessed are you when men revile you and persecute you and utter all kinds of evil against you falsely on my account. Rejoice and be glad, for your reward is great in heaven… (Matt 5:10-12)

Read that again and again. For most of us, persecution will come in the form of painful rejection, segregation, and perhaps even job loss. But it is in this martyrdom of loyalty that a great witness is given… It is then that Jesus shines through us because self is no longer blocking the Light of Christ. It is in that moment that each of us is another Christ, acting in persona Christi.

And in this sacrifice of self, perhaps others will look back upon our witness in which Christ shone and say to one another, “So, you saw Him too?”

Posted in HOME, FAITH AND MORALS, THE HARD TRUTH.